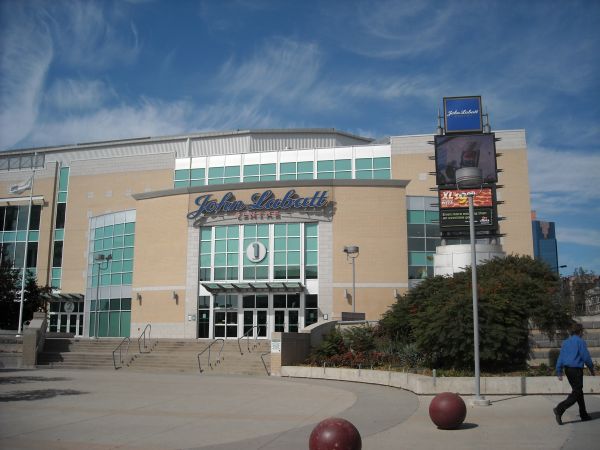 Day 2 of my OHL trip found me in London for a Knights game.  The arena sits in a nicely kept part of downtown, and I actually missed the arena while driving down Dundas Street (the street that runs along the backside of the arena) because the builders did an excellent job of designing that part of the building to blend in with the surrounding architecture, as it has a period looking facade of stone and brick.  That's OK though, as a couple helpful locals pointed me in the right direction.  I arrived early in the afternoon to check out the arena and the town, and after grabbing a parking space I went to "The Armoury"  which serves as the Knights souvenir store and ticket headquarters.  The store has an outside entrance and has regular business hours in addition to being open during game time, something I wish more arenas would do.  From the outside the John Labatt Centre certainly is impressive, with its tall roof and courtyard like feel out front.  Obviously it is named for the Canadian brewer, the Labatt brewery sits in London as well.

After heading back to the rink for the game you can tell that the area fans love their Knights.  The building filled up early, and they certainly use every possible space to squeeze in as many people as possibly into the arena. My standing room seat was actually assigned to stand behind the row of handicapped patrons in their wheelchairs on the upper level.  Still it was a great vantage point to watch the game from as I was at center ice about half way up the upper level.  The standing room spots on the upper end have a shelf to put your drink and are numbered.  Standing room tickets are $15, whereas the regular seats are $18.  My first impression of seeing the seating bowl was that this is basically a 5/8 scale NHL arena.  Since it was only built in 2002 this place has all the modern trappings you could ask for.  The concourse is wide and a virtual food court with lots of concessions.  The lower seating area runs all the way around the rink, with the middle level being the luxury suite level.  The upper level extends around 3 sides like a horseshoe, with standing room along the end with no seats.  There are escalators to get the fans to the upper levels, and the place just has a "brand new" feel to it.  The center ice video board was actually a little blurry.  The seats all seem to offer an excellent view as this place was clearly built with viewing hockey as the main use for the building.  The place certainly seemed impressive when filled with the capacity crowd of 9100.  Actually the crowd may have been more like 9099 as much to my surprise there was an open seat next to Kevin Jordan, owner of the OHL Arena Guide Whom I had made previous plans to meet up with at the game.  It turns out the person supposed to sit in the seat next to Kevin's in the corner of the lower level did not show, so I was able to spend periods 2 and 3 discussing arenas and their merits with Kevin.  Go to his site now and bookmark it as it is a great one!

They do a lot of things right in London, but there are the typical drawbacks you find with modern arenas.  It seems that everything is sponsored, including the puck drop.  There is a ton of advertising that goes on throughout the game.  The pregame intros are decent, with the Knights skating out of an inflatable castle, and the high ceiling in the building makes maneuvering the remote control blimp a breeze for its operator.  Surprisingly the washroom lines get backed up pretty bad at intermission even for the mens room.  I am not sure if it is a lack of washrooms, or if everyone tries to use the same ones, but I am sure that could get annoying for regular attendees.  About the only other negative about the place is the "Club Seating Area"  which even takes up a large part of the concourse.  I guess there is just something about being blocked from certain areas of a building that doesn't sit too well with me.  The game itself was a hard fought game between the Knights and the Windsor Spitfires, with good goaltending, a couple fights including a heavyweight was between Richard Greenop and Mike Yovanic. The Spits took a 4-2 win after an empty netter.  Catching a game at the John Labatt Centre is a great experience, as although it may lack the hardcore atmosphere of some of the older buildings in the league it is certainly a showpiece of what a modern arena can be.  Just order your tickets well ahead of time as the attendance at EVERY game ends up at the capacity 9100.  The London fans sure love their hockey, and you likely will too. 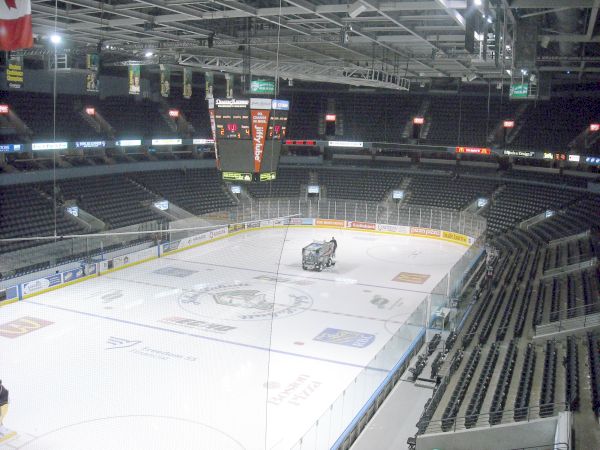 Other information about the London Knights is available at:  Knights home

Other information about the John Labatt Centre is available at:  Arena home

More photos of the John Labatt Centre are available  Here