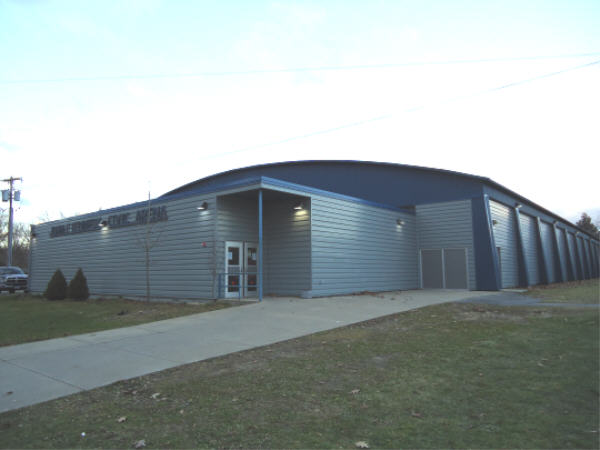 John F. Kennedy Civic Arena sits tucked away in a working class neighborhood in Rome, New York.  It is hardly the type of place one pictures when you think of today's current state of minor league hockey.  This is an almost 50 year old barn built in 1963, but recently renovated and currently the host of the Rome Frenzy of the Federal League.  It is a classic small town facility from the outside, with its hangar type room and blue metal siding still having a old fashioned look.   The name of the arena is affixed to the end of the building near the entrance in raised block letters.  Oddly the way the 2 colors of siding contrast each other when looking at the arena from the side it looks exactly like a self-storage facility.  The rink shares a parking lot with the town pool and a small park.  Nonetheless the facility feels very much like it is off the beaten path and out of the way in this residential area.  I like the fact that an old barn this small is hosting minor league hockey as it is a nice departure from the corporate palaces which sit 75% empty in many of today's larger minor league markets.

Make no mistake however this is little more than a community arena with a few seats and not really the type of building one thinks of when they think of pro hockey.  There is a double door near the main entrance which opens up to the lobby and snack bar area.  There was a table set up earlier in the day selling tickets there as well.  On game night you enter through the other door a few steps further which is ends up next to the arena skate shop and on the ice level concourse of the arena itself.  Once inside the small size of the arena is evident.  The seating capacity is listed at 1200 now, and there are bleachers on both sides of the ice as well as the far end.  The seating is made up of 7 rows of metal (shiny diamond plate in fact) bleachers with bright orange plastic benches to sit on.  The end of the ice features 4 rows of seating with orange benches, although the structure is the more common aluminum bleacher type.  The dividers and ramps are seperated by chain link fencing, and the protective netting runs all the way around the building and up toward the ceiling.  Add in all of the previously mentioned elements along with an extremely low roof and metal support rafters that hang even lower and about the only way to describe the viewing experience from most of the seats is "hockey inside a steel cage".  The shiny metal fencing and bleachers, as well as the view-obstructing netting make for a rather unpleasant viewing experience.  At least you are safe from flying pucks.  Clearly they did the renovations on the cheap with the thought of cramming as many seats as possible inside the building.  Positioning a lot of seats in a small place I like.  The confining feeling of metal everywhere and netting to top it off I don't like.  The glass is new however and offers a clear view, and infact the lower seats seem better here as opposed to the higher seats which usually offer the best view.  There are space heaters hanging in front ot the bleachers, but they were not needed on this evening.  I am glad they renovated the building to add enough seats to give it a go at trying to house a FHL team though.

The game night experience was OK however.  There is a good PA system, although my main complaint is the fact that they played many of the same songs over and over.  Worse yet, after the first period I did not hear any announcements of penalties or goal scorers.  This is a basic thing that needs to be done.  A decent crowd was on hand as the building looked 2/3 full, although the box score declared the attendance as 308 there were clearly more people than that there.   There was a merchandise table set up selling Frenzy gear, and the fans seemed to really get into the game. I ended up getting up from my seat after the first period and watching from the glass along the end boards and enjoyed my vantage point there.  The fans seemed to get loud and "Let's Go Frenzy" could be heard quite a few times, which is great to see for such a young franchise in one of its first half dozen home games.  Having a few fans on hand from the 1000 Islands region, which is 90 miles up the road, to support the visiting Privateers added to the atmosphere as well.  Despite the generic metal bleachers and questionable sight lines due to the netting the building has enough quirks to keep arena fans interested.  The benches are on opposite sides with box penalty boxes next to the home bench.  There is a small press box atop the bleachers on the home side, and the home seating ends just past the blue line as that is where the zamboni entrance is.  It is also neat that the visiting team walks through the concourse at the end of the rink to get onto the ice from their locker room and there are no barricades or dividers to keep the players and fans sperated.  A fan can walk past the players carrying a hot dog, while the players approaches the door in the dasher boards behind the net.  As you would expect with such a low ceiling there is no center ice score clock.  There is a new scoreboard at the far end where the seating is.  There is also an older scoreboard on the end near the main entrance but that was not functioning.  There were no contests at intermission, although there were a few contest giveaways which folks could sign up for.

Overall the John F. Kennedy Civic Arena is a decent place to watch a game as a change of pace.  The game itself was enjoyable, although the Frenzy self destructed after a 2-0 lead and the 1000 Islands boys scored 3 goals in the last 10 minutes to steal the win.  The Frenzy have been selling "skill level" as their main draw and have a bunch of European players.  They also have chosen not to market the rough stuff and have a team built for speed.  Nonetheless, although Euro hockey is not my style, the game was entertaining and even featured 2 fights and quite a few scrums after the whistle.  The best part was that clearly both teams were playing hard.  All the fans are close to the action and it is a fun place to experience.  For $11 the game was certainly worth its price tag for entertainment as I could care less about intermission contests or mascots.  They may need to think about adding those things however to attract the casual fan.  That or market the rough stuff which puts fans in the seats.  Still, Single A level hockey in such a small building is a treat.  Hopefully enough fans support the team to keep things going in Rome.  I enjoyed my visit to this old fashioned yet newly renovated barn. 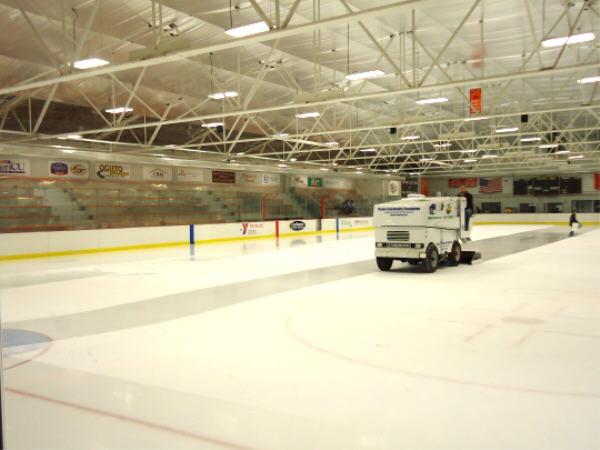 Other information about the Rome Frenzy is available at:  Frenzy Home

Other information about John F. Kennedy Civic Arena is available at:  Arena Home