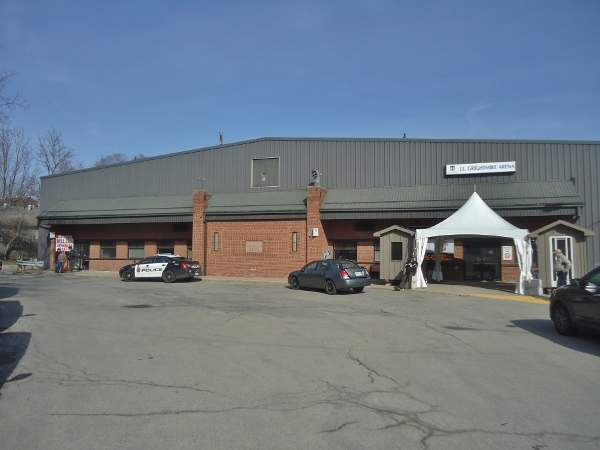 The Allan Cup is a big deal.  How big of a deal?  Well, it has been awarded to the Canadian senior hockey champs since 1909, since before there was such a thing as Lord Stanley's Cup.  Although this event goes unnoticed by 99% of the hockey fans in the States, the Allan Cup is Canadian tradition, and this year it was in the small town of Dundas.  About 20 minutes west of downtown Hamilton, J.L. Grightmire arena is an unlikely home for a championship of any kind, yet provided the perfect setting for this semi-pro title tournament.  Built in 1950 this simple barn is small on the outside.  There is not much parking on site, and with fans from all over Canada in town for the week it made for quite an event.  This simple gray barn has a brick lower front facade and a simple sign affixed to the end of the building signifying that it is a hockey arena.  Tucked into a residential neighborhood, the arena sits on the edge of downtown Dundas on Market Street, and is commonly referred to as Market Street Arena.  A pair of temporary box office sheds were set up in front of the main entrance for this event.  Action took place all week in the tournament, and we were able to catch a couple preliminary games, but this report will discuss the finals as the hometown Real McCoys were attempting to claim the Cup in their own barn.  Tickets for the final Saturday afternoon matchup were general admission and cost $25.  Fans lined up outside about an hour before the doors opened, some displaying the Newfoundland flag to cheer on the Clarenville Caribous who were facing the McCoys in the final game.  A simple parade of firetrucks, antique cars, and local minor hockey players delivered the Allan Cup trophy to the arena as fans awaited entry and TSN cameras rolled.  Yes, this was a big time event.

Upon entering the tiny arena you pass through a hallway and can either enter the arena itself, or the lobby, which appears to have been recently renovated and features food concessions, beer sales, and a merchandise table.  Once you enter the arena you are taken aback by how tiny this place is.  Everything about it is small.  A simple 3 rows of plastic seats run down each side of the ice, with higher seating on the ends which extends as high as 7 rows.  That's it.  A low ceiling is devoid of a center ice scoreclock, and the single scoreboard is on the far end wall of the arena.  The ice is small too, at 190' x 80', making for close confines for the players to do battle in.  The capacity of the arena is listed at 1500, but, although we could find no official attendance number, there were well over 2,000 in attendance for this game.  There is standing along the top of the narrow concourse aisle which runs above the seats, and there is a second standing platform on one side of the arena below the simple pressbox.  The colorful seats add flare to the building, but this is old time hockey all the way, as it should be in a battle for one of hockey's oldest trophies.  The quirks are everywhere in this arena, as the faceoff circles extend up against the boards due to the narrow ice surface.  The benches are extremely short, and have an upper row to them.  It is interesting watching the players shift around to get ready to take the ice.  Players coming off of their shift go and sit in the back, and then rotate to the font as their next shift approaches.  There is nothing fancy about J.L. Grightmire Arena.  The interior features cinder block walls, and beige metal siding.  In true community arena fashion, space is at a premium, and the McCoy's dressing room is off of the upper concourse aisle, and the players have to walk down through the stands to get to their bench.  Depending on what part of the arena you are walking in, you may have a hard time escaping the pungent locker room smell which we are all familiar with.  There is a sense of history in the building though, including retired numbers of former McCoys, including Rick Vaive, who skated in Dundas after his NHL career was over.  Additional banners in the arena pay tribute to the McCoys, as well as the Junior C Dundas Blues who also call Grightmire Arena home.  The McCoys have seen a couple of incarnations of their franchise, with the current one occupying this arena since 2000.  They currently compete in the 6 team Allan Cup Hockey circuit in Ontario, a league formerly known as Major League Hockey.  This is the perfect arena for a semi-pro team at this level, and provides a welcoming home to the McCoys and their fans.

The game day experience for this championship can be summed up in 2 words:  Pure Hockey.  Despite being aired live on a TSN channel, and despite a packed building, there was very little fanfare.  Hockey was the main attraction and that seemed to suit the fans just fine.  There was a very simple presentation, with music played over the tinny PA during certain breaks, and other times there was silence.  The sight lines are honestly not that great here, as with all the seats being down low the glass leads to a lot of obstructions.  There were a couple of fan contests at intermission including a tire roll, but overall the presentation was low key.  Navigating the concourse at intermission was difficult, and the concession stands had quite a line-up.  There is a second concession stand on the concourse in one corner of the arena, and a second beer stand in the other, both in addition to the ones in the lobby.  We suspect that for a regular season Real McCoys game that crowds would not be an issue.  The game itself was incredible.  Where else can you watch former NHL and AHL players compete for a championship all while the farthest seat is 30 feet from the ice?  The intensity level of the game was as it should be when a cup is on the line, and the back and forth nature of the game had the crowd cheering on every rush and every hit.  It was loud and intense and the fans were being treated to some amazing hockey in a surreal setting.  The game fittingly went to OT, with the McCoys claiming the 3-2 win about 13 minutes into the extra period.  The locals were overjoyed to be the champions of Canada,  and we waited around for a half hour as players took their turn skating with the Allan Cup, posing for photos with their families and fans.  We were impressed with the way the town played welcome to fans from all across Canada (and this hockey fan from Pennsylvania armed with a notepad and camera).  A block away from the arena, at the Dundas Community Centre they had a fan welcome center set up, with the trophy on display during the week, games for the kids, food available, and even live music.  We have enjoyed our other experiences with watching regular season ACHL semi-pro action at other venues, and are sure a regular season stop in Dundas would be fun.  Having the added bonus of season a National Championship be decided was a bonus.  Watching a very high level of hockey being played in such as tiny, ordinary arena, with one of the oldest hockey trophies in the world on the line made for an unforgettable experience.  Picture you local community arena.  Now imagine how cool it would be if it was packed to the rafters and you could watch a national championship be decided on the ice while live national TV cameras rolled.  We were fortunate enough to experience it in real life. Other information about the Allan Cup can be found at:  Allan Cup History Page

Other information about J.L. Grightmire Arena can be found at:  Arena Home

More photos of J.L. Grightmire Arena can be found  Here