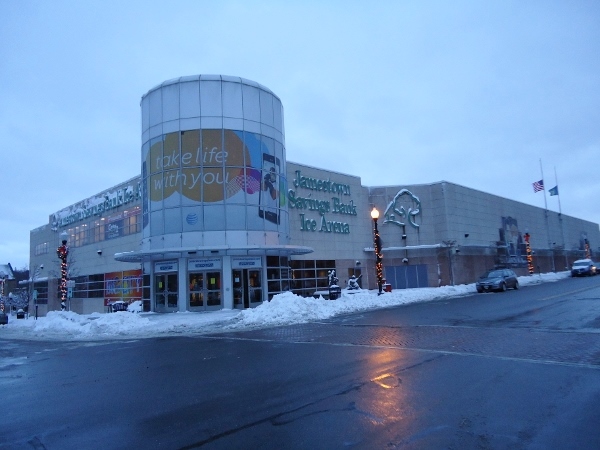 Our relationship with the Jamestown Savings Bank Arena actually dates back quite a few years, as we have made the 3 hour drive to Jamestown multiple times, all for different teams.  We saw the Erie Otters host a preseason game here before we even started the RTR website, and then returned in the early days of the website to see the Mid-Atlantic League's Jamestown Vikings take the ice.  In fact we even already completed a review of this facility on the site which you can check out Here .  It is not often that we do multiple reviews of a venue, but since our photo quality was not the best in the early days of the site, and since the level of play hosted at the arena was upgraded to the NAHL we figured a return visit was in order.  The arena opened in the early 2000's, and has had a rocky history of hockey tenants since then.  The arena sits in downtown, a couple blocks from of the museum paying homage to Jamestown's claim to fame - Lucille Ball, who is a Jamestown native.  The building is built into a hill, and the main entrance sits on the corner of the building.  The arena design is simple, but looks rather sharp from the outside, and has murals built into the window space dedicated to not only Lucille Ball, but the Ironmen also.  A rounded glass atrium signifies the entrance to the building.  Jamestown sits in the heart of the snow belt, so the local small parking lots and on street parking can sometimes be tough to navigate with often epic lake-effect snowfall totals in the area.  Nonetheless, for a smaller city like Jamestown this is a fitting arena which serves its purpose.

Tickets for the game are purchased at the box office counter which sits directly inside the front entryway.  There is a large lobby and portable merchandise tables set up.  At $8 the Ironmen tickets are a bargain.  Sadly, many others do not agree since the team has struggled with low attendance since taking the ice 2 seasons ago.  The arena also serves as a community arena, and houses a second ice pad, a pro shop, and seems to have a decent amount of ice time booked for community events.  This Saturday game featured a 5pm start, as do many of the Ironmen games, and with no local rivals in the league except for Johnstown, road trips for the team are long and arduous.  The main arena is accessed through a set of doors from the lobby. The entry point is at the top of the main seating bowl and a wide concourse, which also serves as a walking track, runs all the way around the seating area, running behind the 6 rows of blue plastic seats which circle the ice.  The arena has some character though as we love the upper seating area, which sits on one side of the ice and can be accessed by a set of stairs which run to the top of the building from the concourse area.  The balcony, or upper level seats, feature a mere 4 rows of seats, but provide a different view of the action, and feel like they are perched over the ice.  There is even a standing rail atop the upper level seats, and the video and broadcast announcers set up there as well.  The building is structured so that the upper level of seats actually sit on top of the rooms which serve as the food concession area, a sports bar, and arena offices.  All of these can be accessed off of the main concourse.  The second ice pad sits on the other side of the concession area, and the seating in the snack bar overlooks the second pad as well.  The arena, although seating only 2,100, has a big time feel to it.  Sadly it is often mostly empty when games are being played.

The game presentation for the Ironmen games is basic, but sufficient.  There is a makeshift video screen set up on one end, and an intro video is played before the players take to the ice.  There are several fan contests, including a chuck-a-puck contest, and the usual promotions for fans.  Depending on where you sit, viewing can be obstructed by netting which runs all around the entire arena, except in front of the benches and balcony area.  The lower seats here actually offer a better view than in a  lot of arenas as the front row is even with the top of the boards, offering a good view of the action.  Oddly the arena does have a rather glaring design flaw which we have not seen at any other arena.  The PA announcer's booth sits on the penalty box side, but is actually a glassed-in little box which sits in the middle of the seating area and is raised up on a platform.  What does this mean?  It means that if you sit in the center ice sections on either side of the penalty box your view of one end of the ice will be obstructed to the point that you cannot even see the net.  Odd for sure.  There is plenty of room to move around with the usual attendance here though, so that is not an issue.  The Jamestown Savings Bank Arena's largest crowd was likely in 2010, when the arena hosted preliminary action for the 2011 World Juniors before the tournament started in nearby Buffalo.  A banner hung in the corner commemorates this event.  The crowd for the Ironmen games is rather quiet, and the atmosphere is rather lackluster, although the on ice action is good.  The game itself was a thriller with Jamestown taking a 3-2 overtime win over Kalamazoo in front of an announced crowd of around 500.  We like the Jamestown Savings Bank Arena.  We would not keep returning if we did not.  We would just love to see fan support take hold.  The arena is too good not to have a strong hockey tenant. 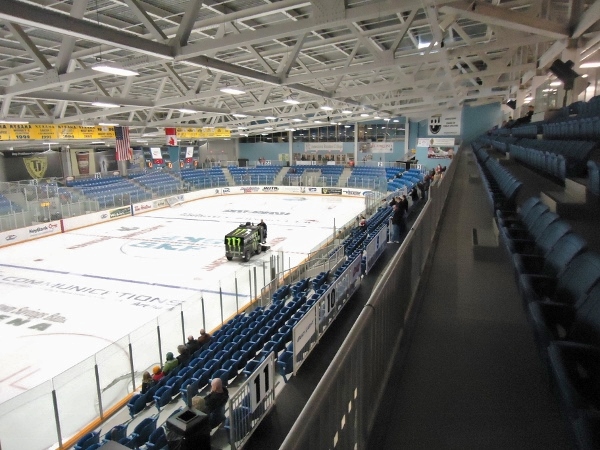 Other information about the Jamestown Ironmen can be found at:  Ironmen Home

Other information about Jamestown Savings Bank Arena can be found at:  Arena Home