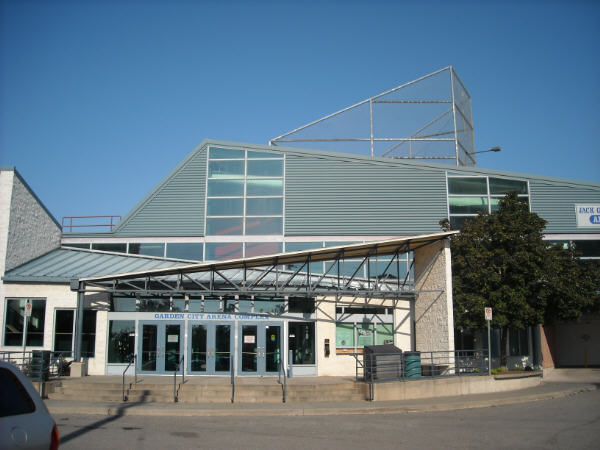 The Aussie band AC/DC has a song called "The Jack", and as of last season the Niagara Region OHL fans have a place to watch hockey also known as "The Jack".  Both are equally cool.  This was the last of 4 games which I caught on my September Ontario trip, and was preceded by  a trip to the Brock University Hockey Tournament, only about a mile away, and only hours before.  I had heard about this barn quite a bit since it reopened for OHL use in 2007, and also heard about the large crowds which the team was attracting.  I did order my ticket ahead of time, although that was a painful process in dealing with Ticketmaster which I will not bore you with further details.  My ticket cost $18 plus fees, and ended up being a great seat in the last row near the blue line.

I have heard many complaints about the parking situation at this arena, but was able to find a spot about a third of a mile away in a large lot for free.  The walk to the rink was mostly up hill, and I can see how this would be rather uncomfortable during cold winter days, but this is a minor inconvenience for the treat of taking in a game at such a classic building.  Yes this place is old school, having been built in 1938, but is has been upgraded nicely without losing its old time atmosphere.  The Gatecliff Arena is the larger of the 2 arenas which make up the Gatorade Garden City Arena Complex.  I guess the lengthy and multiple names for the place is why the locals simply call it " The Jack".   There is a 3 window box office outside, and a will call window in the crowded entry way.  Once entering the building itself you go up a flight of stairs to the concession area of the arena.  Through a set of doors is a building which harkens back to the glory days of hockey.  The seats are all brightly painted wood benches.  They are actually 2 person benches which fold down and do not have arm rests.  You wont find seating like this at too many arenas anymore, and they add to the charm of seeing a game here.  There is one concourse which extends around the top of the seating area all the way around the building, and is as narrow as any I have encountered.  Add in the fact that they use part of the walkway as a standing room area and you will find that navigating around the rink when the place is full is nearly impossible.  The washrooms are out in the entryway where the food concessions are, and there is a nice, but small, IceDogs merchandise store there as well.

The viewing experience of a game here probably ranks as one of the most fun of any arena I have visited.  The place is crowded, with only 2800 seats plus room for about 300 more in standing room.  You are sitting right on top of the ice and can hear just about everything the players say during the game, as they can of the fans.  The rink features a small ice surface, meaning the tiny neutral zone makes for quick transitions.  It seems as though the sight lines from all seats are good, and the ceiling is low making the place very loud, and certainly imposing for visiting teams.  The benches are across from each other, with the penalty boxes actually being next to the visitors bench.  This game against Brampton saw an almost full house, and a raucous crowd.  The fans here like to have fun, and beach balls made their way to the ice on more than one occasion.  Despite being an ancient barn this place has been updated enough to seem sufficient for the modern OHL era.  There are 4 video screens which all show a clear picture, although they are oddly hung from the rafters and on the sides of the building.  The sound system was not bad and the PA announcer did a good job. Music during the stoppages was always appropriate for the game situation as well.  The team certainly has done a great job with marketing and advertising as there are plentiful sponsor adds along the ice as well as high up on the ends of the arena, near the ceiling level for the end zone seats. Despite all the signs you do not feel like you are being sold something at every stoppage, in fact this place has one of the least corporate atmospheres of any arena which you might find.   Make no mistake about it though, as you are in an old building.  The portrait of the Queen still sits in prominence at one end of the ice.  The old fashioned press box still sits seemingly unchanged, and the hockey atmosphere has that old-time flavor to it.  Basically what the arena management has been able to do is shoe-horn in all the needed amenities for modern OHL play into a throwback of a building.  The combination ended up being one of, if not my favorite, buildings I have ever attended a game at.  Having the IceDogs pull off a 4-2 win kept the locals happy as well.  For some reason when you go to  a game here you feel like part of the action, and having the PA announcer do an on-ice interview with the first star of the game  was also a nice touch which I have never seen done before.   It is always neat when you can experience a high level of hockey in an arena which seems "too small" for the level of play which you are watching.  I loved the fact that this place was so small, yet had a  big time atmosphere.

From the announcement of the IceDogs moving to St Catharines from Mississauga in 2007 just about everyone had said that the stop at "The Jack" would be a holdover until they can get a new arena approved in Niagara Falls, St Catharines, or elsewhere in the region.  To this day that seems to be a true statement, but I am afraid that moving the team to a newer, larger, more modern building will ruin what they have going.   Catching a game here is so much fun, and in my opinion, the way Junior hockey is meant to be presented, that to change the setting would be a real shame.  Sure a newer barn would have more comfortable seats, a wider concourse, as well as a more convenient parking situation, but it certainly will not have the atmosphere  of "The Jack".   Thankfully they are scheduled to play here for at least 3 more seasons, and although I don't often make return trips to too many arenas a return here would be inevitable if I am able to fit it into my schedule. 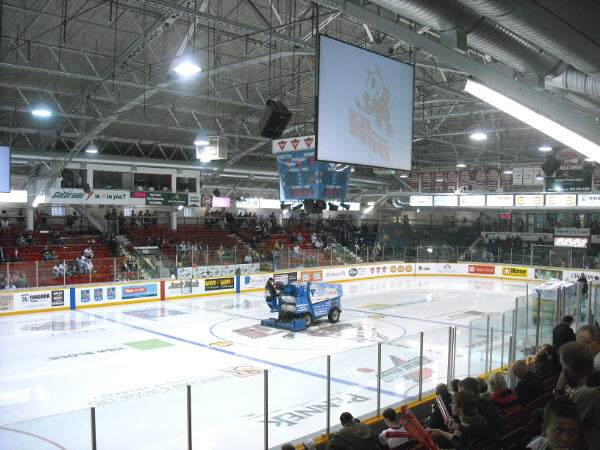 Other information about the Niagara IceDogs is available at:  IceDogs home

Other information about Jack Gatecliff Arena is available at:  Venue home