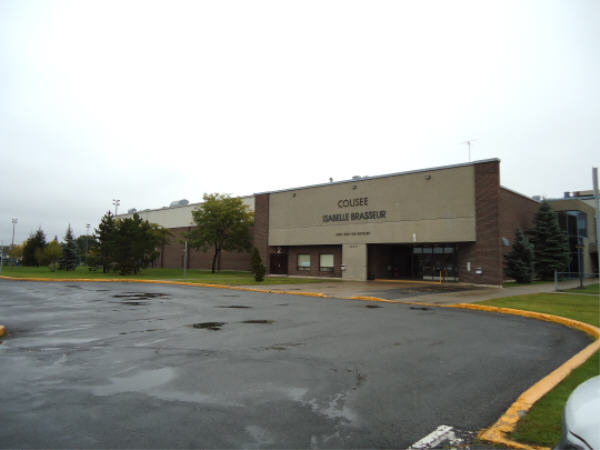 Boy was I excited!  This was my first ever trip to see action in the rough and tumble LNAH.  I had been checking out the fight action in this league for quite a while thanks to hockeyfights.com, and now I was really in Quebec to see the guys I had read so much about on the web.  The arena itself sits just off the main drag in St-Jean, and is actually part of the city parks and recreation facility.  From the outside it looks pretty non-descript and blends in with the surroundings of the area.  The styling is that of a typical arena built in the early 80's (1980 to be exact), and with its brick exterior it could be mistaken for several on campus arenas at some U.S. colleges.  The building actually hosted QMJHL action for a while in the 80's and 90's.  There is a large parking lot on site, and a sign near the street indicating this is the "home of the Chiefs".  I actually reserved my ticket ahead of time as banter on the web indicated this game vs the Sorel-Tracy Mission would be one of the best attended games of the year in St-Jean.  I love how the pre-game hype and advertisements included posters indicating that the Jon Mirasty vs Steve Bosse rematch would take place.  Oh I wish that U.S. minor leagues would market like this.   I picked up my previously ordered $15 ticket and then grabbed a bite to eat at Subway, where the sandwich artist had trouble understanding my English, as did I his French.  No harm done as it is hard to screw up a meatball sub.

After dinner it was back to the arena where a large crowd gathered even before the doors opened, in fact this would be a sellout including all the standing spots.  The building capacity is listed at 2750, and there were at least that many people there as it was packed.  Entering the arena there are a couple box office windows to your left.  Then you go up a flight of stairs to the arena itself, entering in the corner of the rink at the top of the seating area.  This rink is very active with local events in addition to serving as home to the Chiefs.  There is a large snack bar/restaurant complete with seats just to the left of the entrance, and the poutine was good.  One of the best parts of an LNAH game is the atmosphere.  The crowd, in addition to the play, is intense.  I strolled the concourse above the seating area before game time, even meeting up with a couple guys from the hockeyfights.com forum who also spoke English.  The arena has a low ceiling, and it feels even lower than that as there are brightly painted steel rafters which are made all the more prominent by their yellow color. The seating is uniform around the rinks, with 6 rows of individual chairs all the way around.  The blue and yellow seats are newer style plastic seats.  If you end up in the orange seats in the corners they are older worn wooden seats, but sufficient nonetheless.  The views from all seats are good as the first row is actually at the same height as the top of the glass.  That may be different than you think though as the glass at most of these Quebec arenas is only a couple feet about the dasher.  The Chiefs enter the ice down a hallway on the one side and the fans in the first row can easily high five the players as they go by.  There is a pressbox on the same side of the arena as the benches.  The scoreboards are at each end as the low ceiling makes it not feasible to have a center-ice score clock.  The restrooms are located on either end of the arena just off the wide concourse, and there is also a small Chiefs merchandise kiosk where I was able to buy my first LNAH jersey.  It is still a favorite of mine today.   The Chiefs (and from what I can tell the rest of the league) generates a large portion of its revenue from beer sales.  The beer girls walked the aisles during the action to drum up sales as well.

The reason this place is a must see is the atmosphere.  I have never been to a more electric atmosphere at a hockey game in my life.  The fans lined the standing spots as warmups were about to start.  The crowd really gets into the game here.  Of course warmups are part of the show in the LNAH, and the tough guys for each team congregate at the redline and jaw back and forth.  As I cannot understand too much spoken French I cannot tell you too much about the pre-game puck drop or other announcements made by the PA announcer.  Once the game started the fun multiplied.  The game was filled with fights, including Steve Bosse (who everyone thought would scratch due to a broken hand) vs Jon Mirasty round 2.  The Chiefs' Bosse knocked Mirasty on hit butt, and the place went NUTS.  The rest of the game also lived up to the expectations of the sold out crowd, and  despite a Chiefs 1 goal loss the crowd was happy to see the Mirasty-Bosse fight that many thought would not happen due to Bosse's hand.  Not only was the game entertaining, but the arena and atmosphere only added to the fun.  It is hard to get an atmosphere like this at a 9000 seat arena.  Yes this place may not be that big, but the noise level and crowd intensity will make you feel like you are at an event, not just a hockey game. 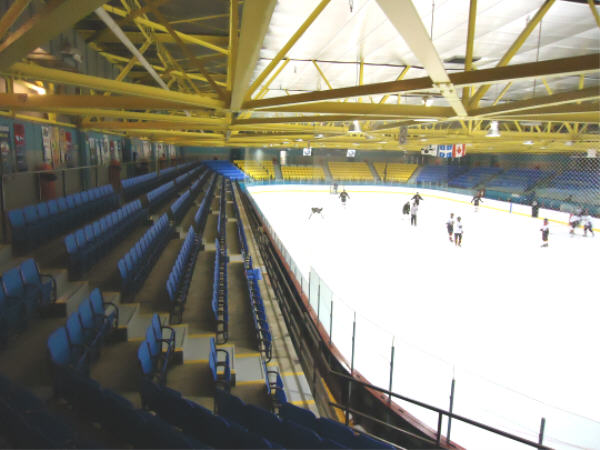 Other information about the St-Jean Summum Chiefs is available at:  Chiefs home

Other information about Colisee Isabelle Brasseur is available at:  Arena Home

**Note- The photos on this page and in the photo gallery were taken October 24, 2010 on a more recent trip to Quebec as I did not have my camera when I attended the game outlined above