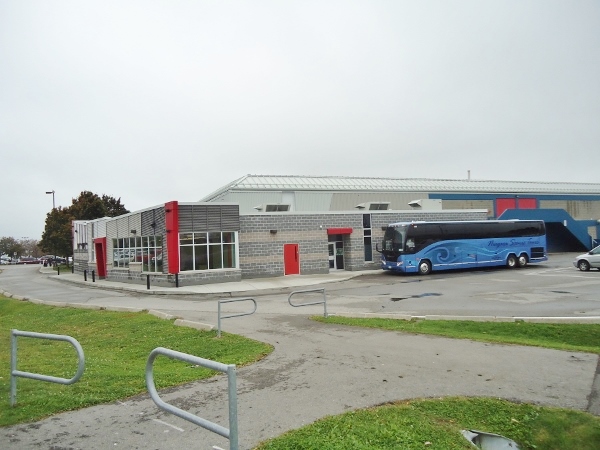 The Iroquois Park Sports Centre is a busy complex located yards away from the shore of Lake Ontario in Whitby.  Having opened in 1986 this 6-pad arena complex also houses other athletic facilities.  The building is flanked by a large parking lot which was quite full for this Sunday afternoon contest between the OJHL's Fury and the Buffalo Junior Sabres.  The sprawling complex has an industrial look, and the main arena where the Fury play is to the right of the entrance doors, which open up to a bustling, mall-like concourse, complete with a food court and seating, as well a a pro shop.  The Fury share top billing at the arena with the Whitby Dunlops of the Allan Cup Hockey League.  The Dunlops are among the most well known Senior A teams in Canada.  Sporting fields also make up part of the complex, and an electronic marquee sign lists many of the events going on at the facility as you pull into the parking lot.  The Iroquois Park Sports Centre is clearly a hub of athletic activity in this area, as upon entering the building the foot traffic was not unlike that of a busy airport, only instead of travel luggage folks were toting around hockey bags and sticks.  It took over 5 minutes of waiting outside to get a photo of the entrance of the building to wait for a few seconds where no one was going or coming to simply get the shot.  Yes, this is a busy place.  The exterior of the main arena is made up of a light brown textured concrete, offset by dark gray and red trim.  A silver metal roof makes up the top of the building, and in front of the end of the arena is a brick addition which makes up a fitness center and gym type facility.  Because of the sprawling nature of the facility you have to stand back in the parking lot to get a true view of the actual shape of the arena as all of the other ice pads are connected, but the main arena makes up its own wing of the building.  The Fury have been part of the OJHL greater Toronto Junior circuit since relocating from Oshawa in 2008.

Once inside the building a simple table is set up selling tickets and programs for the Fury games.  A ticket for the 2:10 game (all of the Fury Sunday games start at 2:10 for some reason) cost $12.  The main arena itself is entered through a simple door behind the ticket table.  The glass end wall of the arena is covered with a vinyl wrap mural of the Fury logo.  The arena is a simple 2 grandstand design, with 9 rows of seats on each side.  The seating is made up of plastic seats, all of which are brightly colored in red, blue, or yellow.  The capacity is listed at 2,500, and the seats are steeply pitched.  A wide upper aisle is atop the seating area, and there is a standing rail at the top of the arena as well.  The interior also features yellow accent walls, and is among the most brightly colored arenas we have encountered.  The building is clearly a lacrosse arena as well, as banners pay tribute to the huge Ontario Lacrosse Festival as well as the Whitby Warriors lacrosse team.  Also of note are the Dunlops banners, including the 1958 Allan Cup banner, signifying the Dunlops national championship that year.  A single, simple scoreboard sits along the far end wall of the arena, and there is a decent sized pressbox along one side.  In one corner a community room overlooks the ice.  The main arena at Iroquois Park Sports Centre is a simple design, yet is nicely kept, and more than adequate for the OJHL.

The game presentation at a Fury game is all business and rather low-key.  We enjoy the OJHL as the skill level is high and the players definitely play hard.  Less than 200 fans were on hand for this Sunday afternoon matchup though, so it is hard to get much crowd atmosphere going when the building is less than 10 percent full.  The sight lines are good though, and the arena, although cold, is a comfortable place to watch hockey.  The game is presented in a professional manner.  There is music during stoppages, but during intermission not much happens at all aside from a chuck-a-puck contest, not even any music over the PA.  Most of the fans head out into the lobby area to warm up, get some food, or look around the Whitby Sports Hall of Fame, which sits just outside the arena doors.  The Hall of Fame is a nice touch, and the rest of the arena concourse hallway also has Whitby sports memorabilia, including NHL jerseys of Whitby natives Adam Foote, and hall of famer Joe Nieuwendyk, who also led the Whitby Warriors to a national junior lacrosse championship in addition to his hockey career.  The game itself was very good, albeit not very good for the locals, as the Junior Sabres came back after being down 3-0 to win 4-3 in a shootout.  The Iroquois Park Sports Centre is an impressive venue, largely due to the high level of local participation in hockey and other sports.  The fan experience during a Fury game may not be that exciting due to the small crowd, but the arena is modern and does not have many shortcomings.  There are just too many hockey options in this part of the Eastern Greater Toronto Metro area for spectators, including the OHL's Oshawa Generals 10 minutes down the road.  With the Fury's frequent Sunday afternoon schedule it makes for a great hockey double before heading over to Oshawa to catch an evening game.  We imagine that the experience here with a larger crowd would be very good.  The Iroquois Park Sports Centre is certainly an arena that Whitby locals should take pride in. Other information about the Whitby Fury can be found at:  Fury Home

Other information about Iroquois Park Sports Centre can be found at:  Arena Home