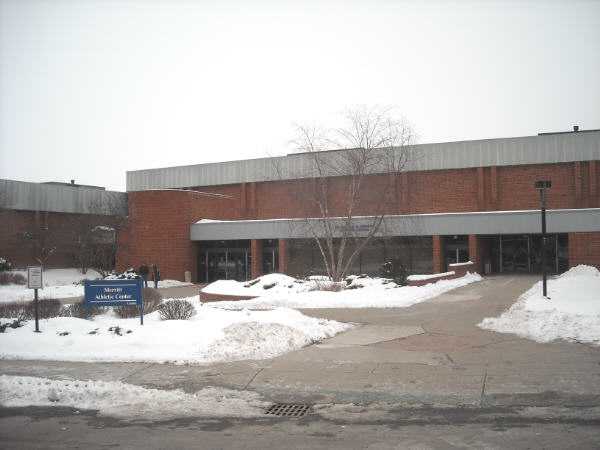 Geneseo- Yes that little town about a half hour south of Rochester.  I first went to a game here 2 seasons ago and had an absolute blast, so I wanted to go back to get photos for this website.  Fewer places are more fun, and despite the basic surroundings of Ira Wilson Arena, catching a game here has a big time feel to it.  The arena is actually part of the larger Merritt Athletic complex, which actually houses the gyms and other athletic facilities in addition to the rink.  As with just about any good college arena, it is located right on campus.  I am not sure what year the facility was built, but it appears to be 1980's architecture.  This afternoon game against the USA National Under 18 Team was labeled as an exhibition, yet had all the atmosphere of the game I attended 2 years earlier against Brockport State.  Also anytime you can attend a game where one team has the letters USA across the chest you are in for a special treat.  The outcome of this game would actually be more special.

Parking is on campus, and free for athletic events.  There was a lot going on in the building in addition to the hockey game as there was basketball being played, and the girls lacrosse team was practicing inside the gym as well.  The ice arena is to the left once you enter the main entrance.  Admission is $6 for adults, and smartly I believe they allow students in for free, creating an awesome, raucous atmosphere in this little arena.  Upon entering you are immediately hit with how cold it is inside- rightly so as that is how every arena should be, but in today's age that is often not the case.  You enter at the top of the seating area and a concourse goes all around the arena, and also serves as a running track.  Those of you that are astute will note that this place is virtually identical with the arena of SUNY rival Cortland State.  The only differences are that Geneseo gets great student and fan supprt, whereas Cortland is usually empty.  The seating is on each side with fold out bleachers which are about 10 rows high.  Capacity is listed at 2500, and I believe that includes standees, as the view from standing at the top of the concourse is also a great vantage point to watch the game.  The amenities are basic at best, with few concessions, and on this afternoon game it did not look like any food was available, save a vending machine.   Still when this place fills up with about 2000 enthusiastic fans it is a fun place to be.  Just inside the main entrance is an elevated open air pressbox which you actually walk underneath when walking on the concourse.  The ceiling in the building is quite low, although they do have a small center ice scoreclock.   Behind each goal there are hand painted banners, which do look a little cheesy, but truly show the spirit the school has as they are from different frats and campus organization, all showing their support for the Ice Knights.  They also have basic contests between periods, including a chuck-a-puck contest, only they use real pucks!

What sets this place apart from other arenas which are this basic is the atmosphere.  For me a trip to Geneseo is all about the pep band.  I sort of see it as a mini version of Cornell, where the students and fans are all into the game, understand the game, and make every effort possible to support their Ice Knights.  The pep band, although small, is fantastic.  They play appropriate songs for the game situation, seem to hit their mark as soon as the whistle blows, and also really know how to get the crowd going.  When the USA team, who have repeatedly beaten Division 1 NCAA teams this year, including Harvard and Michigan State,  took a 2-0 lead early in the game I figured it would be a long, boring game.  The boys from Geneseo came back however, and the underdogs took a 3-2 win, much to the delight of the crowd.  See- sometimes you don't always root for the guys with USA on their jersey, and today was one of those occasions.  I give major props to Geneseo for getting a good crowd for what most considered an exhibition game, and the fans took it as seriously as a game against their biggest rival.  If you go to a game here, come prepared to have fun, as both times I have attended games here I have left wanting to come back.  The Ira Wilson Ice Arena in reality is not much more than a sheet of ice with fold out bleachers on each side, but when the crowd shows up this place is as much fun as taking in a game at one of the big Division 1 schools. 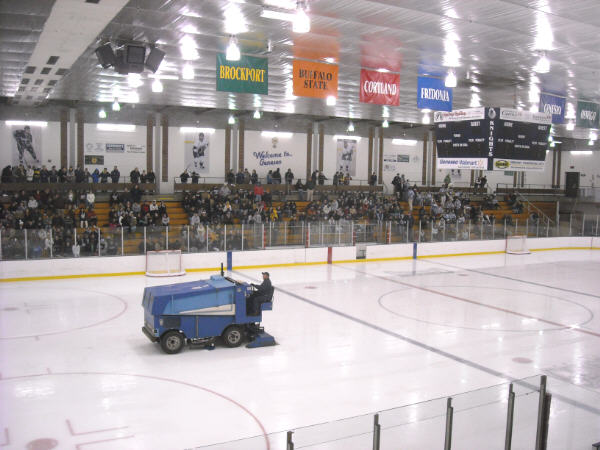 Other information about the Geneseo Ice Knights is available at: Team home

Other information about Ira S. Wilson Ice Arena is available at: Arena home