Ice Rink at Coal Street - Home of the Wilkes-Barre Miners 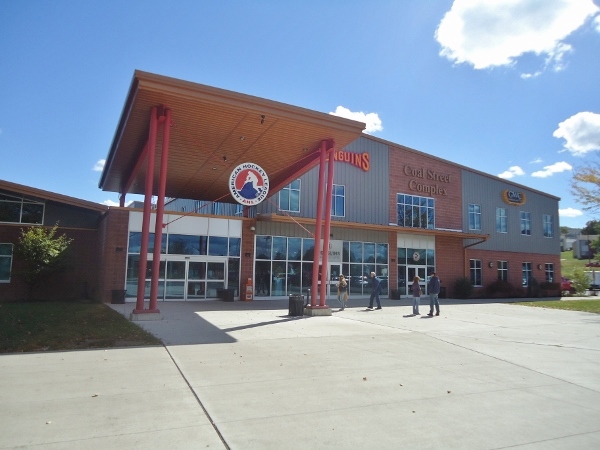 Did you ever get that feeling that you need a hockey fix today, but there are no games close by that you can attend?  At the end of September we had that urge, and checked the schedules and found that the Wilkes-Barre Miners, a new team in the Northern States Hockey League, had a Sunday morning game which fit our plans nicely.  Honestly we have not focused too much on U.S. Tier 3 junior leagues here at RTR, so we had no idea what to expect, but were glad we decided to take the 2 and a half hour drive to Wilkes-Barre for some early season action.  The Ice Rink at Coal Street sits on the edge of downtown Wilkes-Barre, in a city park.  As can be expected in Pennsylvania in September, the adjacent park was buzzing with youth football action.  The building itself sits in between a softball field and football fields, and has a modern look to it.  The red brick exterior is offset by gray metal siding.  The logos of the AHL and Wilkes-Barre Penguins are prominently displayed on the outside of the arena, and this is their practice facility.  The main entrance sits under a metal awning, and next to that is an entrance to the WBS Pens team store.  The building used to be known as the Wilkes-Barre Ice-A-Rama, but was taken over by the Penguins organization in 2010, and extensively renovated into the nicely appointed, modern building that it is now.  The building also houses team offices, and the entrance side of the building has many large windows.  The actual ice rink portion of the arena is off to the side of the building and has a barn like silhouette.  Overall this small arena is very appealing to look at.

Just inside the main entrance is a box office to the left, and the team store, which is fulled with WBS Pens gear, is off to the right.  Despite the early 10:45 start of this Miners game, the store was open for business.  The team was giving away complimentary tickets to the game, which was one of the first half dozen in team history.  The overall layout of the building has a very open feel, and there is a very nice lounge with modern furniture which has windows looking out onto the ice.  An open ceiling exposes support beams and piping, adding to the modern industrial look.  The snack bar and arcade are also open to this area, and there is even a fireplace which will keep folks warm in the winter.  One wall is dedicated to the success of Penguins players who have made it to the NHL after practicing here at Coal Street.

Through a set of doors off of the lounge area is the arena itself, which is little more than a sheet of ice with 5 rows of metal bleachers on one side.  Despite being a smaller arena with a listed capacity of only 600 it has a ton of advertising along the boards, and walls.  The far end of the ice has the glass completely wrapped in advertising for a car company.  The slope of the roof is a little odd in that the seating is on the lower side of the roof, which extends higher above the side with the player benches.  Exposed red metal support beams are the prominent feature, which are visible no matter which direction you are watching from.  The stands themselves are not very steeply angled, and the netting in front of the seats is never ideal, but many fans choose to watch while standing along the end boards.  Sky lights on the end of the arena let in lots of light, and brightened the place up for this late morning game.  With the open structure of the arena section of the building it looks like they could easily fit twice as many seats into the arena if they wanted to.  Behind the seating area are a couple of party rooms and some storage rooms.  Certainly, whether watching from along the end boards or grandstand area you get the feeling that you are in a nearly new building.

The game experience, although not as big-time as Junior A or Junior B in Canada, was decent.  The PA was loud and clear, and the quality of play was decent.  As mentioned we had no idea what to expect as this was our first U.S. Tier 3 game, but we became intrigued when we read about how the Miners signed a goalie who we saw play last year in the EOJHL for Gananoque, so we would compare the level of play to some Junior B leagues we have seen before.  There isn't a strong fan following for the Miners yet, as they were still in their first month of play for the new franchise, but the entertainment value of the game was quite good.  There are no fan contests at intermission, and everyone from the stands seems to congregate in the heated lounge area at intermission.  The Miners did have a merchandise table set up in the arena, and seem to be trying to take hold in the community.  The crowd was made up mostly of some parents of players, local youth teams and parents who were finished with their on-ice session just before this game, and a few folks who seemed to have been at some earlier Miners games and are starting to know the players a bit.  Overall about 200 people were in attendance, not bad considering the early Sunday start time.  The game itself was a back and forth contest which saw the Miners trail early to the New England Stars, and then come back to win 6-5 in a shootout.  A trip to the Ice Rink at Coal Street may not be a destination for hockey travelers in and of itself, but it filled our need for a hockey fix on this particular Sunday, and provided some good entertainment in a nice modern building.  With a schedule of some games starting at early times it may even make a great early stop before seeing an AHL game across town.  If we lived close by we would look forward to seeing the Miners in action again as the players are hustling, working hard, and doing it all for little glory other than the chance to compete and hopes of playing college hockey some day.

Other information about the Wilkes-Barre Miners is available at:  Miners Home

Other information about the Ice Rink at Coal Street is available at:  Arena Home