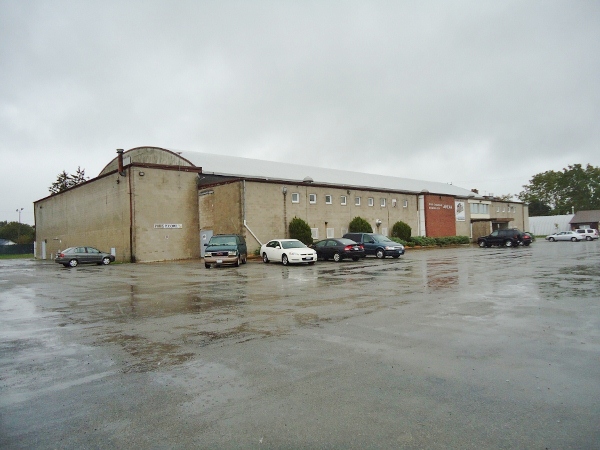 Why does Roaming The Rinks sometimes pass over on more "big time" facilities in order to catch an occasional Junior B arena is a small, out of the way town?  Because we frequently stumble across old time gems like the Port Colborne Humberstone Arena.  Most folks will call the place a dump.  We call it a classic which we are glad to have experienced.  The Port Colborne Pirates Sunday afternoon early season tilt was the first half of a 2 arena double on this day, and was a great way to spend an afternoon.  The Arena, also known as West Side Arena, has that old school, yet tiny, arena silhouette from the outside which many would equate with a small community arena. The brick exterior and arching roof are weathered, and faded, and the inside of the building is just as worn out, but spending 2 and a half hours to watch a game here is like stepping back in time.  The arena was built in 1960, but honestly if I did not look up that fact I would swear that it is actually older than its half century age.  There is a small but adequate parking lot on site, and you can see the huge red lettering labeled "Arena" on the end of the building near its roof from quite a distance away, indicating you are in the right place.  An old, small, individual letter sign sits near the small set of entry doors on the side of the building, stating the building is known as Port Colborne Humberstone Arena, complete with a couple of letters missing.  A sign on the box office inside refers the the place as West Side Arena.  Either way, it is a place with few comforts, but lots of character.

After entering through the small entryway in the center of the side of the building there is a box office window to your right, but you actually need to go up a narrow set of stairs to your left, and onto a small landing where there is a seperate vintage style box office and a trophy case area displaying some of Port Colborne's hockey history, including items from the long running Sailors organization which was the former name of their Junior B team.  The small lobby is complete with outdated, yet age appropriate wood paneling.  After you enter past the box office you are on the narrow upper concourse which runs all along the top of the seating area, all the way around the rink.  This is a band box to be sure, as on the concourse behind the last row you are still amazingly close to the ice surface.  The entire inside of the building is a decade or so overdue for a good scrubbing, but that worn look adds to the atmosphere of the place.  The sign near the box office indicates the arena has a capacity of 1440 people, and there are 5 rows of seats on the bench side, and 3 rows on the other side, and 4 rows in the corners and on the ends.  The arena has a mismatched variety of seats, include the old style wooden 2 seater benches in the corners, (similar to the seats in the Kingston Memorial Centre), metal benches with the curved back rest in some spots, and even a few modern plastic seats behind the benches, which were recently added as part of a "seat replacement drive" which is advertised on a sign near the box office.  Despite the different types of seats all are color coordinated either pale blue or gray.  There is a standing rail all across the top, and a very low ceiling.  The scoreboard is on one end, and the dasher boards are made of real wood.  You don't see that many places anymore.  The boards are also really high, coming up to shoulder height for many of the players. As if the old style seating alone isn't enough of a quirk to make this place fun you will not believe how the benches are set up.  The players bench is actually elevated 2 steps above the ice, so when entering for a shift the players actually step down 2 steps and onto the ice.  When the players are sitting on the bench the top of the boards, which as mentioned are quite a bit higher than at most rinks, is actually at knee level for the players.  The lack of uniformity and differences in the actual layout of the place compared to most arenas makes Humberstone Arena worth seeing.

The game presentation is OK, but not overly exciting.  Watching the game from anywhere in the building is fun because you are so close to the ice, but there is not many frills or added attractions.  The PA system is old and muffled, and intermissions essentially consist of the zamboni flooding the ice and nothing more.  There is a small concession stand on the same side as the main entrance, and it is full of hand written signs warning not to ask for extra ketchup or dipping sauce and the like.  The arena has a generally run down feel to it, but it is still a cool place.  The temperature inside the rink is also extremely cold, which is the way a hockey rink should be.  The afternoon game was a good one, with the Pirates beating the Stoney Creek Warriors 5-4 in a good battle.  The atmosphere was not what it could have been as only a little over a hundred fans were in attendance, but I have seen some recent Youtube videos where the place was packed for GOJHL playoff action and was certainly rocking then.  If you have a chance to get here when there is a big crowd you need to do it.  The other interesting fact of note about the Port Colborne Humberstone Arena is that the center ice logo was not a Pirates logo, it was not even a logo for the arena itself, but rather the logo for a new arena listed as opening in the Fall of 2012, and there were archtectural drawings of the new building on display on the concourse, so it appears that the Pirates days at this fine old arena are numbered.  I would recommend getting there this season if you have a chance.  Here is a link to the information for the new arena which has already broken ground:  Port Colborne Health and Wellness Centre webpage .  I could find no confirmation that the Pirates will move there, but drawings on the concourse during the game indicated that the new arena will have a thousand seats, so one would think that is where the team may end up.  Before attending this game I had no idea that had I waited until next season I may have missed out on Humberstone Arena.   Nonetheless not much is different here than 50 years ago when this old barn opened so it is worth your time to see a game at this old arena not far from the shores of Lake Erie while you can.

Other information about the Port Colborne Pirates is available at:  Pirates Home

Other information about Port Colborne Humberstone / West Side Arena is available at:  Arena Home