Some cities in North America are so closely tied to an attraction which lies within its limits that the city and the attraction become almost one and the same.  San Francisco has the Golden Gate Bridge.  Green Bay has the Packers.  Orlando has Disney World.  Hershey, Pennsylvania has the Hershey Bears... and that famous chocolate company.  The candy giant and the Bears and amusement park setting which they occupy are all owned by the Hershey's Corporation.  This small town outside Harrisburg has been the mecca of minor league hockey since the 1930's.  Given the history and grand place which Hershey occupies in the hockey world what better place would there be to experience hockey at our 100th different venue?  With number 100 in mind we hit the AHL Outdoor Classic at Hersheypark Stadium.  The stadium was built in 1939, and sits adjacent to the famous Hersheypark Arena, former home of the Bears.  Also steps away is the Chocolate World attraction and museum for those with a sweet tooth.  Roller coasters sit as a backdrop to this basic, yet classic stadium.  The stadium itself is little more than 2 separate concrete grandstands with a free standing brick box office sitting at one end of the stadium.  This simple structure would be set up as a hockey venue seating a little over 17,000 fans once the 2 temporary grandstands were in place in the end zones.  The stadium has played host to many activities over the years, including football, auto racing, and is currently Central PA's prime concert venue in the summer.  I remember in college when I tried to see hair band rockers Poison here, but ended up not being able to get a ticket.  With a big crowd expected one would think parking and crowd control would be an issue, but with the property being set up perfectly with the amusement park and attractions on site, as well as the adjacent GIANT Center across the parking lot getting to and from the game was a breeze.  An $8 parking charge was no fun, but in the end was worth it since the one way direction of traffic in and out of the complex makes things flow smoothly.  I arrvied 2 and a 1/2 hours before gametime to chat with fellow RTR members and you could tell this was as much a festival as it was a hockey game.  There were quite a few fans from the Scranton area on hand as well as the Bears were playing the in-state rival Penguins.

Tickets for the Outdoor Classic were not cheap, although I saved a good bit on my $75 ticket since it was an extra one previously purchased by a friend.  Entry to the stadium was from the West end of the stadium, and a large gathering of fans were taking part in "Fan Fest" which included food vendors, game booths and giveaways for kids and an autograph tent where Bears alumni signed autographs for the Bears faithful who were on hand.  A stiff breeze and temps in the 30's by gametime made things cold, but not unbearable.  Fan Fest also featured a stage with live bands.  The stage was set up only steps from the historic Hersheypark Arena.  The game ended up being sold out, so there was not much activity at the box office.  The box office itself is a neat structure which looks similar to a train depot and features an old-fashioned marquee sign on its roof announcing upcoming events.  Fans can walk across from the East side to the West side, but have to pass between a row of pines trees and the box office along a narrow walkway.  This was an odd setup for a hockey game for sure.  The grandstands feature 30 rows of seating, most of which is made up of plastic benches on top of the concrete structure, although the center sections did have individual chair seating. There is a large pressbox on the top of the West grandstand.  Underneath the grandstands are open air concourses lined by chain link fence to keep folks inside the venue.  The concourse walls feature nicely maintained yellow bricks which remain unchanged since the facility opened.  There were quite a few food and merchandise stands open, and the large turnout of fans found the merchandise booths running out of souvenir pucks before warmups even started.  The ice surface was laid out in the center of the football field, but configured more toward the North end of the stadium.  The seating was very far from the field, but that is certainly something everyone knew when they purchased their ticket so it is nothing to complain about.  Fans were here for an event, and the folks in Hershey seemed to have done a good job in giving them that.

The game day experience at the Outdoor Classic was markedly different than the usual AHL game experience, as well as being different from most of the other 99 arenas we have attended.  It was exciting yet odd to watch warmups as the sun was beginning to set and the crowd of over 17,000 was finding their way to their seats.  All of this taking place with a backdrop of roller coasters will certainly be memorable.  Although virtually every seat in the joint was far from the action there were large and clear video boards brought in on each end to help enjoy the action.  The pregame ceremonies were not over the top, but did feature a cool pyro display as the Bears made the long walk across the field onto the ice.  I anticipated a flyover or parachute jump like they had at the AHL outdoor game in Syracuse in 2010, but things were kept much more low key.  Once play started the sun began to set more with the 5pm start time and it got colder.  The crowd seemed to be into the game, although at time the usual sounds of skate blades gliding across the ice, or the sound of the puck hitting the tape after a cross ice pass could almost not be heard at all, making for an odd experience.  Also, as could be expected with a setup on a football field, the sight lines were not the best, as even from my seat 13 rows up at the blue line the view of the puck was obscured if it was within 10 feet of the near boards.  I was able to watch the second period from seats across the ice near the top of the stadium, and the view from that vantagepoint was better from the standpoint of seeing the action, although the players and ice looked correspondingly smaller from there.  The entertainment level of the game presentation was good, with on-field interviews of Bears alumni.  At intermission rather than have activities on the ice there were school marching bands set up on the field to give the hockey version of a half time show.  There were also fan shootout contests at intermission as well.  As the game went on the intensity level kicked up, and there was a very good scrap at center ice in the second period.  Despite some fans being very cold almost everyone stayed until the end, when the Hershey fans hopes of a win were dashed a couple minutes into overtime allowing the Wilkes-Barre Scranton Pens to take a 2-1 win.  The folks who helped organize such a large undertaking as this did a great job with the planning, and although I wouldn't want to watch a hockey game in a football stadium every day the experience was certainly memorable.  A large fireworks show helped cap off the night as the fans headed to the parking lot having witnessed another example of why Hershey in on the map as a hockey town, not just a chocolate town. 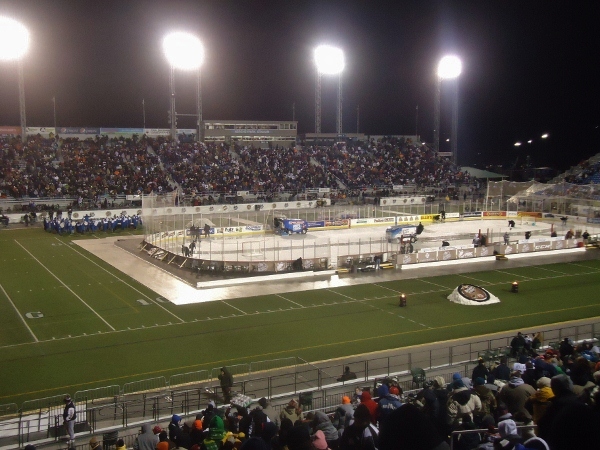 Other information about the Hershey Bears can be found at:  Bears Home

Other information about Hersheypark Stadium can be found at:  Stadium Home

More photos of Hersheypark Stadium can be found  Here