The Hershey Centre sits among the suburban sprawl in Mississauga, just a short distance from Toronto.  Having opened in 1998, this arena has been home to OHL hockey since its inception, although they have been through a couple incarnations of teams and 3 separate team names.  Junior hockey is a tough draw in this area, and even after the nearby (10 minutes away) Brampton Battalion moved away attendance continues to be a challenge here in Mississauga.  Named the Hershey Centre, the building has a bit more of a connection to the chocolate town than you would think as the original owner of the Mississauga IceDogs, the arena's first franchise, was Rose Cherry, late wife of Don Cherry, and she was a native of Hershey, PA.  The arena sits on a bit of a hill, and there is a view of the the skyscrapers in the city from the property.  Free parking surrounds the arena, and the building itself is a well kept modern industrial style arena,  The exterior is made of cinder block, brick, and metal, and features a couple of red raised-letter signs on the exterior walls.  The box office entrance sits on the end of the building and has a courtyard area as you approach.  That end of the building features a modern looking entrance that could be confused for a college lecture hall or a museum. A glassed in lobby and flat metal roof on that section contrast the look of the rest of the building.  Large glass doors open into the box office lobby, and there are small touches throughout the property which tie in with Hershey's identity, including Hershey Kiss lights which light the exterior of the arena courtyard.  The Hershey Centre is certainly an attractive example of a modern arena, with many well- thought-out features on its exterior.  In addition to the main arena there are additional ice pads adjacent to it which are for community use.

Once inside the box office entrance to the Hershey Centre you are on a wide concourse which runs around the arena. There is a team store just inside the entrance, which is small, but had a good variety of Steelheads merchandise.  Tickets for the Sunday afternoon contest against the Niagara IceDogs were $17. The concourse has windows overlooking the parking lot in some places,and has various food concessions as you would expect.  The seating bowl of the arena offers a good view from every seat, and with a capacity of 5600 this is a mid-sized arena.  Seats are all plastic and brown to match the Hershey theme.  There are luxury suites along one side of the arena above the seating bowl, and a restaurant and club seats along the other side.  The concourse runs about half way up the seating bowl underneath the seats.  There is a small amount of standing room on the ends as well.  Having hosted the Memorial Cup only a few years ago in 2011 the arena had some upgrades then despite being fairly new to begin with.  A decent video board hangs above center ice, and the ceiling features exposed beams and ductwork below the tin ceiling itself, all adding to the modern industrial look.  One nice touch is the portrait of the Queen which hangs between the Canadian and American flags above center ice on one side.  With approximately 20 rows of seats all the way around the arena no fan is too far from the action and all seats offer an excellent view as the sight lines are good.  The Hershey Centre is clearly a building which is large enough, and modern enough to host today's OHL without any concerns of it being outdated or not well equipped.  Sadly this arena goes largely unnoticed and often sits mostly empty on games nights as it seems to get lost in the shuffle of the Greater Toronto hockey market.

The gameday presentation at the Hershey Centre for a Steelheads game is professional and focuses on entertainment.  A pregame pump up video is shown on the video board, and there are a fair number of contests and giveaways.  Intermission featured peewee hockey, as well as a fan shootout contest.  The music during stoppages is fast paced and mostly pop music.  The PA system volume is kept quite loud, but gets a bit muffled at times.  The main issue, one which is immediately noticeable once the game is about to start, is that there are a lot of empty seats.  Listed attendance for this Sunday afternoon game was 1800, but there were clearly far less fannies in the seats than that.  With such a nice, relatively large building, and so few fans in the arena you get the effect of having a game being played with virtually no fan noise at all.  We won't say that the arena was as quiet as a library, but it was pretty close.  We do give the Steelheads fans credit though, as within a 10 year time period they have seen the IceDogs leave for St. Catharines, have been told that the St. Michaels Majors are now their team, and then had the team reincarnated as the Steelheads.  This type of turnover has certainly made things difficult for fans in Mississauga, and certainly ticked some off too.  Past history also indicates that none of the three franchises mentioned have ever drawn fans anywhere near capacity for the Hershey Centre though.  It is a bit of a shame as the OHL is great hockey and the tickets are affordable.  The Hershey Centre has all of the ingredients needed to make for as good of an atmosphere as one could ever find at a modern arena, with some small details such as the Hershey Kiss lamps and the portrait of the Queen making things interesting, it just lacks the fans to bring the dynamic ingredient into the mix.  Don't expect a raucous atmosphere at a Stellheads game, but the fans that are there certainly cheer on their team, the noise just gets lost in this relatively large building.  We are sure that watching the 2011 Memorial Cup here would have been a blast with near capacity crowds.  For now, the Steelheads plug along with their small fan base and do offer as good a product as they can to those who choose to buy a ticket.  That's all you can really ask as a fan, although those local to Mississauga may have their reasons as to why they choose to get their hockey fix elsewhere instead of cheering for the Steelheads. 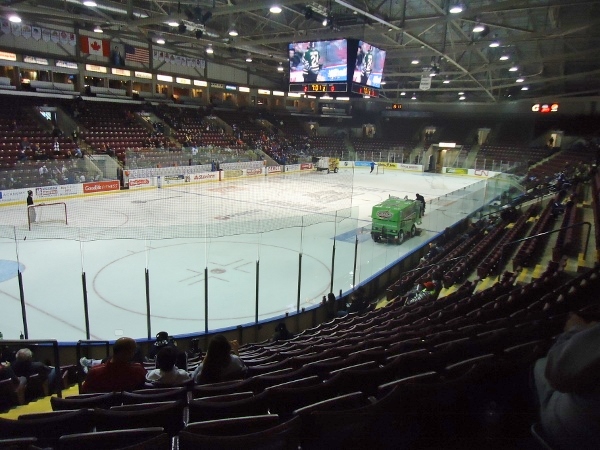 Other information about the Mississauga Steelheads can be found at:  Steelheads Home

More photos of the Hershey Centre can be found  Here