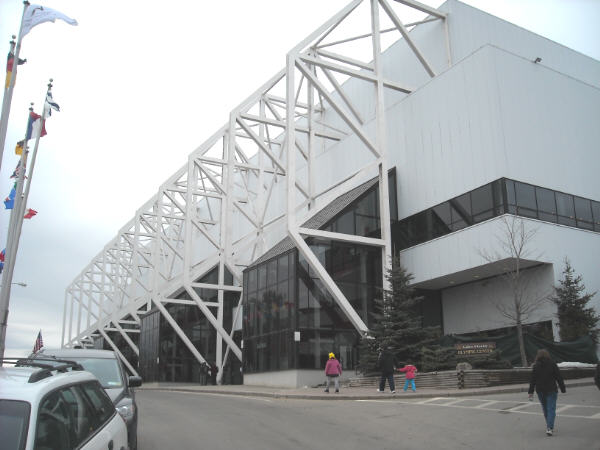 Few venues in American sports history have the allure of Lake Placid, where in 1980 the world was turned upside down by the USA hockey team.   At the same time there are fewer places more off the beaten path than this tiny ski area town in the Northern Adirondacks.  I have had the U.S. Olympic Center on the Roaming The Rinks radar for a couple years, but the arena hardly ever holds countable games.  When I saw that the NCAA D3 finals were scheduled here for 2009 and 2010 I knew I couldn't miss out on a chance to see a game where history was made.  As mentioned the town of Lake Placid is remote, so there is no local pro or junior team which calls the arena home.  Furthermore the closest college team is Plattsburgh, over an hour away and they have their own rink.  It is neat approaching the town from Interstate 87 as you go past the ski jump and other Olympic competition areas.  The arena itself, or rather the arena complex made up of 2 arenas, is situated in the middle of town.  Parking for the game was set up on the Olympic speed skating oval, which is open during the winter for people to skate on.  This is the same sheet of ice where Eric Heiden claimed 5 golds in 1980.  The town itself has a touristy feel as you would expect, but they do a great job with the presentation on championship weekend (I guess they are no longer calling the D3 weekend the "Frozen Four").  Before the game in an adjacent parking lot a stage was set up and none other than Connecticut-based hockey rockers The Zambonis were on hand giving a free concert.  This was very cool and a lot of fun.  If you are not familiar with The Zambonis check out their website thezambonis.com, or search Youtube for a sample of their work.

The exterior of Herb Brooks Arena (renamed that in 2005 in honor of coach Brooks who passed away a couple years earlier) is a modern white structure with girders protruding off the side to give it an ornamental look.  The structure is built into the side of the hill.  There are glassed-in stairways which allow entry up to the main concourse.  A large number of flags from Olympic competing countries line the alley which runs in front of the arena.  The box office sits at one end of the building on the lower street level, and you can also enter there and go to the Olympic Center Museum which sits just inside.  I was excited to check it out but was greeted by a not-so-friendly museum caretaker who stood at the door with her arms folded like a bouncer and advised "the museum is closed unless you have NCAA credentials."   I didn't even know what she meant but that kind of soured me on the whole place.  I mean come on, 2 hours before the game on the weekend when they have a few thousand people in town for the games and the museum is closed?  Oh well that saved me 5 bucks.  Attached through an interior hallway is the 1932 Arena, which looks really neat and housed the 1932 Olympic hockey tournament.  On this weekend it was hosting a Midget level tournament, complete with the usual pay-to-play tournament extras such as the event photographer who was changing parents over $20 for an 8x10 photo of their kid.  A ticket for the NCAA final game cost $16.  Although the arena is named in honor of Herb Brooks all signage in and around the building indicates it is referred to as the 1980 Rink, and the smaller arena as the 1932 Rink.  All information I can find indicates that the Herb Brooks arena was also built in 1931 along with the smaller arena, but the exterior stylings of the building clearly are not from that era, so I am guessing that either the entire larger arena was added for the 1980 games, or the arena was remodeled to give it more modern styling.

Once inside the arena itself you feel like you have stepped back in time 30 years.  A concourse runs atop the lower seating bowl, and features large windows on the side of the building nearest the speed skating oval.  The concourse on the other side is narrow and dark, and has no windows as that side is built into a hill.  Off the end concourse one end leads to the hallway to the 1932 Rink, the other has small windows which overlook a third sheet of ice, this one currently set up for curling.  The place feels older than it is, and has an awesome atmosphere.  Obviously the ice is Olympic size, something I ain't too fond of, but what would you expect at the Olympic Center.   Above the main level is a balcony level accessible by going up one of the tiny stairways which go up from the main concourse.  They are small and 2 people can barely fit by each other, they remind me of a stairway you would find going up to an attice in a small house.  The balcony level features 6 rows of wooden bleachers.  The seating upstairs is laid out incorrectly so that the railing in front of the seats blocks most of the view.  The seats are open at the top so you can look over the back railing and see onto the concourse below. The view from the balcony seats on the end is good though, and it feels like you are sitting in the rafters.  The seats in the main seating bowl are individual red plastic seats, and they look to be from the 1980 era are very flat in their shape.  The pressbox sits above the balcony, and as media in 1980 is clearly not what it is today you can imagine the news people from the USSR sitting atop the arena in shock on that fateful day in 1980.  The lighting in the arena can be described as dim at best and the scoreboard is old fashoined as well with no place for shots on goal.  Seating capacity is listed at 7,700, and I am sure with that many people in the building the narrow concourse would be almost impassable.  A couple food concessions dot the concourse, one on each side.  I never realized how much I would enjoy a concession stand hot dog, but the length of the game made me glad to have one.

The game itself turned out to be a classic, worthy of being held in the location of one of the greatest upsets in sports history.  Norwich University, from a couple hours up the road in Vermont, faced Wisconsin powerhouse St. Norbert in the final game.  The presentation itself was somewhat subdued as the NCAA honchos were in charge, but The Zambonis did sing the Star Spangled Banner, and there was music during the stoppages.  The fan turnout was decent at 5,200.  I was a little worried about how big of a crowd they would get since host team Plattsburgh and SUNYAC rival Oswego were both eliminated from the tournament the night before, but with Norwich not too far away, a healthy contingent who made the trip from Green Bay, and what looked to be a bunch of non-partisan locals as well as a few hardcore fans like me (I guess I can make that statement for 1 day at least as I drove 7 hours to get to this game), all made for a good, raucous crowd.  I actually got a hotel near Albany, about 2 and a half hours away to lessen my drive the next day and figured with a 5pm start to the game I would be in bed for the 11 O'clock news.  What transpired during the course of the game made my night a little longer, and much more memorable.  Norwich struck first midway through the first period, and then the Green Knights of St. Norbert evened things half way through the second period.  What happened from there was an amazing display of hockey, and especially goaltending.  Regulation ended tied, and the crowd remained pumped up for the game.  It was an enthusiastic bunch, with the wave circulating the arena a couple times. Norwich outshot St. Norbert 21-5 in the first overtime but goalie BJ O'Brien was a wall.  Midway through the first overtime you could hear the fireworks being shot off over the town of Lake Placid as the game should have been over by now, but was still going strong.  The crowd stayed excited, although along with the players many were starting to tire during Overtime 2. I got a chuckle when a 12 year old kid, sporting a USA Jersey he clearly picked up at one of the souvenir shops that weekend, caught a puck in the stands just in front of the most crowded section of Norwich fans in one corner.  A rowdy chant of "USA, USA" rang through the building.  Yep we are on hallowed ground indeed.  Just about when I thought the game was going to 3 overtimes, and with 31 ticks left in OT number 2 Norwich put one past O'Brien and took home the glory.  O' Brien's 70 save performance was not enough.  As it was already way later than planned I stayed to watch the trophy be awarded to Norwich.  It ain't the Stanley Cup but seeing the guys skate around with the trophy was a reminder of what hockey is all about.  To say I had a blast in Lake Placid would be an understatement.  Good news is that the old barn will be in action at least once for each of the next few years, with a NCAA Division 1 weekend tournament around Halloween in 2010, and it will host the D3 finals again in 2012 and 2013. Go there if you can, and if you do lay the smackdown on the lady in the museum for me.

Other information about Herb Brooks Arena / 1980 Rink is available at: Olympic Center Home