HarborCenter is part of a downtown revitalization project for the harbor area of Buffalo spearheaded by billionaire oil mogul Terry Pegula, who also owns the Buffalo Sabres.  When we attended, the complex was still under construction, with a hotel and shopping area onsite which will be completed within the year.  This arena was designed mainly as a practice facility for the NHL's Sabres, who play in the First Niagara Center across the street.  HarborCenter is also set up to house the OJHL's Buffalo Junior Sabres, as well as Canisius College.  The Golden Griffins previously housed their Division 1 NCAA program at a decent on- campus arena, Buffalo State Ice Arena.  The only problem was that rather than being on their own campus the arena was on that of Buffalo State, who has their own Division 3 hockey program.  With the construction of this new facility the Griffins now have a place that they can call home, albeit about a 10 minute drive from campus.  HarborCenter's layout is certainly unique in that the arena is actually on the 6th and 7th floor of the building, above a parking garage.  Fans can access the arena, which is actually made up of a pair of ice pads, via elevators.  There is also an enclosed pedestrian bridge which connects the complex to the First Niagara Center across the street.  From street level you would hardly know that there is a decent sized hockey arena up above, and the lower level has stores and restaurants, including the 716 Sports Bar, and a Tim Horton's location.  Parking for the Canisius game was 3 dollars, but locals can access the arena via the downtown rail, as there is a station just out front.  Interestingly enough, at the rail station there is a bronze statue of Tim Horton himself, which sits directly across the street from the Donut chain on the lower level of the complex.  On this snowy, typical Buffalo February day the statue, as well as the streets outside, were covered in snow, with drifts and snowbanks 10 feet high.  The exterior of the arena section of the building is made up of red bricks, blue accent trim, and silver and gray metal panels which compose the siding of the arena itself.  If standing in the right location you can see the arching roofline which sits above the main arena, and is also sided with silver and gray panels. The whole design makes for a unique hockey experience, and is not something that you would typically find, even at the newest of arenas.

Once you ride the elevator up to the 7th floor you find yourself on the upper concourse of the main arena.  There is a small ticket table and kiosk, where we secured $10 general admission tickets.  A wide, polished concrete concourse sits above the seating area and goes all the way around the arena.  The lobby end of the arena was roped off and had VIP tables and hors d'oeuvres set up for a group of students and staff in a certain department.  The seating is made up of wooden benches on the concrete risers of the grandstand, and seating is on the sides only, made up of 9 rows, although the seats on one end do curve around into the corner a bit as well.  The wood bleachers are stained a light color, and the open-beam wooden ceiling is also in a light color palate, which looks almost yellow.  There is lots of legroom between rows, and, as you would expect with a brand new building, everything is well kept.  The seating capacity of HarborCenter is listed at 1800, and there is additional viewing from the standing areas on the end of the concourse.  Above the last row of seats is a bar-type rail and high stools where one can also grab a drink or food from the concession stand and watch the game.  A single scoreboard sits on the end away from the main entrance, and there is also a digital message board there as well, which does not appear to be video capable, but shows photos and graphics throughout the game.  The dark blue cinder block walls offset the brightness of the pale colored ceiling and light wood-toned seats making for a visually appealing design.  With open air ducts in the ceiling, as well as open trusses, the building has a modern industrial look.  The HarborCenter logo adorns center ice, but the Canisius presence is made known in the arena as there are Griffins banners and signage.  There are concessions on both sides of the arena, including a smaller stand run by the 716 Sports Bar which is located on the street level, and has offerings including poutine.  Fans can also access the 6th floor, or the ice level of the arena, as there is another concession stand there on the end of the ice, which also serves patrons of the second ice pad.  Some fans view the game from the glass on that end as well.  With the arena only a couple months old there are still a few design kinks to work out, including the fact that sparrows were flying around inside the arena the whole game, often landing on the concourse railing.   Although hardly a huge arena, with 1800 plus standees HarborCenter is the right size to accommodate the crowds which most schools in the Atlantic Hockey conference draw, yet is not so big as to feel empty when a crowd of 1500 or so is on hand.

Being a late season game for the Griffins this Saturday night game was also senior night, and a good crowd of 1460 was on hand to watch this contest against Mercyhurst despite some miserable weather outside.  The gameday experience at HarborCenter for a Griffins game is professional, but not over the top with promotions.  We would have like to have seen a band as that is one of the best parts of the college hockey experience, but there was no pep band in attendance.  There were quite a few students in attendance, but there is no organized student cheering section like you will find at other college hockey venues.  The students just sit in small groups throughout the seating area.  A merchandise table set up in the corner of the concourse sells lots of Canisius gear on gameday, and the crowd support is quite good.  Still without a band and antics of a loud student section the overall atmosphere was rather subdued.  The sights lines to watch the game at HarborCenter are quite good, and the arena feels like much more of a home for the program than the borrowed venue of Buffalo State Ice Arena.  Intermission entertainment is kept to a minimum, but the Griffin mascot does a good job greeting kids and entertaining the crowd.  The fans on hand did have a lot to cheer about as the Griffins beat the Mercyhurst Lakers by a score of 3-1.  When you are in your seat and watching the game you hardly realize that you are on the 7th floor of a downtown highrise.  The designers of HarborCenter did however build a couple of large windows into the concession and lobby area of the concourse which look out onto the harbor and downtown.  On this cold February evening you could see hundreds of locals skating on the frozen canal nearby while the game was going on 7 stories above.  HarborCenter may look like just another highrise city building, but it is also the home of a unique hockey experience for those who choose to take the elevators up to the 6th and 7th floor. 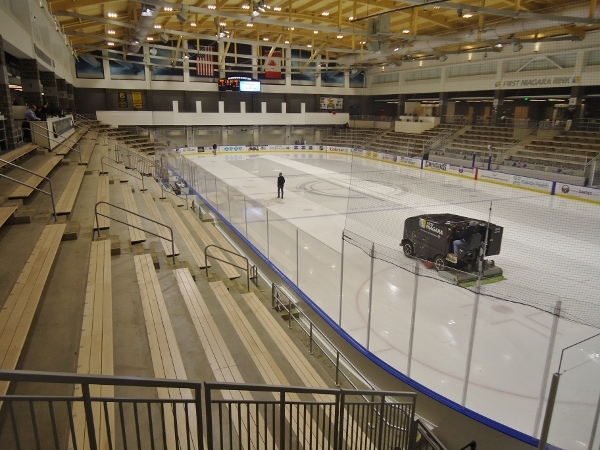 Other information about the Canisius Golden Griffins can be found at:  Griffins Home

More photos of HarborCenter can be found  Here