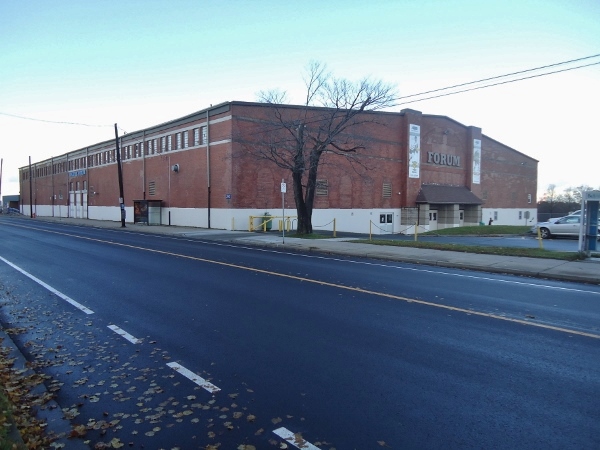 The term "relic" is defined as - "an object surviving from an earlier time, especially one of historical or sentimental interest".   Thankfully for hockey fans the Halifax Forum survives as a relic for fans to still enjoy the game in a setting that has been largely unchanged over time.  The vibrant maritime city of Halifax has been a city with a rich hockey history.  Much of that history started at the Halifax Forum. The Forum is a throwback to a bygone era, but still operates, and gets plenty of use despite its age.  In 1927 things were different in North America.  The Great Depression had not begun,  Babe Ruth still swung the bat for the Yankees, and this grand old building opened for operation.  Billed as the first indoor artificial ice surface east of Montreal, the Halifax Forum has a place in hockey history that one can still experience by taking in a game here.  Having been the city's main hockey venue until the Metro Centre opened in the 1970's players like Ken Dryden and Guy Lafleur played their minor league hockey here for the AHL's Halifax Voyageurs, who claimed 3 Calder Cups in the 1970's. Today the building remains much like it was in the 1970's and before, but still serves as host of big time hockey, as the St. Mary's Huskies and Dalhousie University Tigers both call the Forum home.  The venue also played host to a Maritime Junior Hockey League team until a few years ago. The structure is simple, with a brick exterior and small windows near the roof line. The building could easily be mistaken for a factory or warehouse as folks walk by, and fits into the blue collar North End neighborhood which is a mix of industrial and residential buildings. A small parking lot sits in front of the arena, and blue raised-letter signs are affixed to the exterior walls.  You can't help but feel that you have taken a step back in time when approaching the Halifax Forum.  It has a classic, yet worn out look from the outside, but you can sense the decades of history that the building holds.  Walking toward the main entrance to the arena from the parking lot you can feel bit of electricity and realize that fans have been making that walk for nearly a century.

Once inside the simple entry doors there is a small box office lobby where a $10 ticket was secured for this Friday night matchup against UPEI.  Just inside the lobby you find yourself on the main concourse which runs underneath the seating bowl.  The tan concrete hallway has metal pillar jutting up through the floor.  The concourse features a number of simple plaques which give the history of the Halifax Forum and are broken down by decade.  If you walk around the entire concourse you can get a good sense of the timeline of the arena's history.  For this game a single food concession stand was open, and there was a Huskies merchandise table set up on the concourse just inside the main entrance.  The concourse floor is rather uneven and sloped in some spots, just adding to the charm of this nearly century old building.  The main arena is accessed via several entrances at ice level.  What you find is a 5600 seat arena with gray wooden seats in a U shape around the ice surface.  The front 11 rows are made up of the gray wooden seats, and the upper 5 rows are simply black wooden benches.  Metal pillars support the rather flat roof and wooden ceiling and sit at the front of the grandstand, making for quite a few obstructions when viewing from nearly any row.  Each side of the ice has a pressbox handing from the rafters, and an older, individual bulb scoreclock hangs above center ice.  Since the pressox is even with the front of the grandstand sitting up high in the middle sections means you are essentially looking at the back of the pressbox, making a view of the scoreclock impossible from that vantage point.  A small section of seating in the center ice area have been replaced by yellow plastic seats in an apparent small renovation project.  The far end of the ice is devoid of seating and a cinder block at that end contains the zamboni entrance and features painted murals commemorating past events at the Forum, including an appearance by Muhammad Ali.  A nice touch is the large number of opaque glass windows at the very top of the walls on the side which allow natural light into the arena during daylight conditions as we found out when checking out the venue earlier in the day.  To say that the Halifax Forum is an old school hockey arena would be an understatement.  Everything about the arena screams "old time hockey", and is the kind of place you just want to sit (albeit in the uncomfortable wooden seats) and daydream about the glory days of the sport we all love.

The gameday presentation and experience at St. Mary's Huskies game is straightforward and simple, yet the venue makes watching a game here seem nostalgic.  The Huskies do not draw large crowds for most regular season games, and we were very surprised at the lack of turnout among the student body.  The crowd is mainly made up of older folks who are there for the hockey itself.  There are a few activities at intermission including a fan shootout contest, but the action on the ice is what fans are here for.  The viewing is very good depending on where you sit, as the seats are very steeply pitched, and the only difficulty comes via the obstructions from the roof support pillars as mentioned.  With a crowd of less than 400 on hand though, it was easy to find a good spot to enjoy the game. The fans seemed to spread out at the Forum rather than all congregate at center ice like at some venues.  The PA was loud and could be heard quite easily, and the fan experience here is quite good if you enjoy the quirks and features of old fashioned buildings.  The benches are on opposite sides of the ice, which is not that unusual, but each bench is offset and extend into the offensive zone of the same blueline, making for a home advantage and very long change for the opponents.  The game itself was fantastic, with lots of physical play, lots of shots and a late win by UPEI as they scored with 24 seconds left in the 10 minute overtime period.  The crowd, although small, was vocal and supportive of the Huskies, and are certainly knowledgeable hockey fans looking for some quality hockey without a lot of fanfare or frills.  With the QMJHL's Mooseheads playing a couple miles away in a nicer, more modern building it is hard to get the crowds to watch Univerisity hockey at the outdated Forum, but the fact that the Halifax Forum is still here to entertain those who can see past the fancy video boards or modern amenities is a testament to its importance in Halifax's hockey history.  One can throw around the term "relic" in a negative way to say that something is outdated or irrelevant to the current era. In the case of the Halifax Forum there may not be a term in the dictionary that more closely describes this wonderful building and the sense of history that is contained within its wall.  It should be considered a term of endearment and a badge that this fabled old house of hockey can wear with pride.  As the building nears 100 years of age it still has a charm to it that modern venues will never capture.  Thankfully there is a board of directors in place to maintain the Forum's historical standing and preserve the property and its history.  We can only imagine how fun this place would have been with a full house of fans cheering on the Voyageurs during their Calder Cup runs, and hopefully many more generations of fans will be able to take in a game inside the walls of this relic. Other information about the St. Mary's University Huskies can be found at:  SMU Hockey Home

More photos of the Halifax Forum can be found  Here