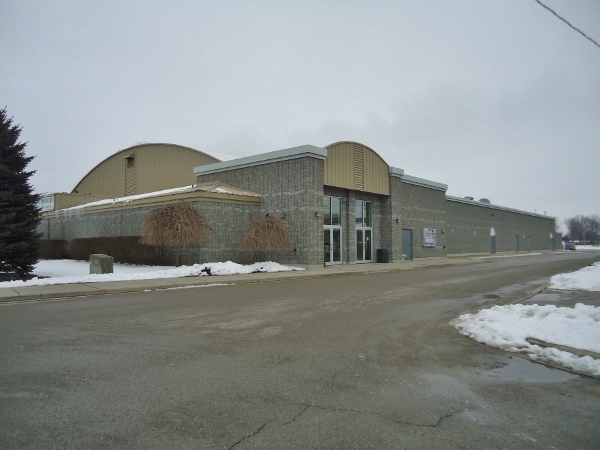 In the 1850's oil was discovered on some land to the east of Sarnia, Ontario.  Shortly after that the settlement of Petrolia sprung into existence, and this small town of about 5000 became known as "Canada's Victorian Oil Town".   When driving through or walking around the small downtown you can smell the unmistakable scent of oil refineries.  Petrolia has seen its share of hockey history over the last half decade, although that fact has likely been something you were not aware of.  Greenwood Recreation Centre opened in 1963 on a plot of land on the agricultural exhibition grounds in Petrolia.  This simple community arena hosted the OHA Senior club named the Squires, and the Squires garnered national attention for a period of time in the late 1970's and early 1980's, earning a pair of Allan Cups as Canada's national champions. The hangar shaped arena looks small from the outside, and the tan metal siding looks like it has quite a few years on it.  The side of the building where the entrance is located is constructed of gray bricks, and there is a simple green and white sign on the end of the building announcing its function.  This is a small town Canadian arena, and on the day of this WOAA playoff matchup the town was out in force at the arena as they were also celebrating the arena's bid to be named a Kraft Hockeyville finalist.  There is nothing fancy or elaborate about the Greenwood Recreation Centre, but that's OK, it is a building that has captured the heart of local hockey players and fans for decades, and exudes character from its simple frame.  With the festivities going on there was no admission charge to the game against the Clinton Radars, but donations were requested toward the Hockeyville campaign and arena renovations, so we were happy to pitch $10 into the donation jar for a ticket.  The lobby inside the entrance has an old box office window, a simple trophy case with awards from the Squires and local minor hockey teams, and several photos of past Petrolia natives who went on to the NHL, most notably the Hunter brothers, Mark and Dale, who were born in Petrolia.  With Canadian senior hockey you can often expect a throwback type experience, and the layout and setting at Greenwood Recreation Centre is perfectly equipped to deliver that.

Once securing entry to the game through the small box office foyer you find yourself in the main lower lobby which overlooks the ice from one end.  In the lobby is a small snack bar, and on game nights a merchandise and 50/50 table is set up.  With the Hockeyville celebration going on there were other tables set up including one for the local minor hockey organization.  There are old photos in the lobby, including some of the Allan Cup winning Squires teams from the past.  The arena itself features a small 185 foot long ice surface with seats on each side.  The side of the arena nearest the street and main entrance features 5 rows of red plastic benches which are fairly steeply pitched and directly on top of the ice. The far side features 3 rows and a pressbox which hangs from the rafters and displays a sign indicating it may have been added in 1979.  The listed capacity is 1000 spectators, but there were way more than that on hand as every seat was full, and folks were standing along the ends of the rink and above the seats, nearly blocking the tiny aisle that runs behind the grandstand.  This is an old school barn for sure.  Exposed wooden rafters can be seen, and the ceiling is also wooden.  A single scoreboard sits on the end wall above one goal, and on the other end there is a upper mezzanine room with a bar where folks can watch the game from behind the glass.  This area also features some nicely done photos and Allan Cup memorabilia.  The glass is very low, and unfortunately there is netting in front of the entire seating area.  The pale green concrete walls are likely the same color as when the arena opened.  The team benches are on opposite sides, and as the building began to fill up well before warmups you got a strong sense that watching senior hockey here now is nearly identical in the experience as it was 50 years ago.  The layout of the rink itself is also a bit quirky as although the ceiling is arched it feels quite low.  The glass on the lobby end actually stops at the end wall, making the panes of glass that the fans look through from the lower lobby actually in play.  Senior hockey may be relatively far down the list when fans are choosing a game to attend, but we have never been disappointed with the level of play, and the rosters are filled with quite a few former Major Junior, CIS, and even minor league players.  The Squires have built a strong tradition at Greenwood Recreation Centre (often simply referred to as Petrolia Arena), and that sense of tradition comes through while attending a game here.

The gameday experience and presentation at a Petrolia Squires games is focused on the game itself. The intimate arena and energy of the fans, at least during this playoff matchup, jacked up the excitement level in the building to a level of intensity that had the crowd buzzing.  With general admission seating and a full barn the place was packed before the teams entered the ice for warmups, and stayed packed until then final buzzer.  The game did feature some intermission entertainment with Timbits hockey being played, as well as a fan shootout contest, but the crowd was here to support the Squires.  The fans were loud, and the older muffled PA could hardly be heard over the noise level in the building.  The game itself was incredibly physical, and each shift seemed more important than the last.  The sight lines are good here despite the protective netting, and you feel as though you are right on top of the action.  The shorter-than-regulation ice surface is also a bit of a throwback and the small neutral zone makes for a fun game.  With an overflow crowd on hand the small washroom facilities has a bit of a lineup, but the atmosphere inside the building was electric.  It was announced just before the game that Petrolia was in fact not chosen as a Hockeyville finalist, so there would be no prize funds coming for arena improvements.  That's OK though, as although the arena is a bit weathered and rough around the edges it is a great place to experience hockey, and fans can catch some quality action in this small town.  The Squires took the win over Clinton 4-2 but went on to lose the 7 game series.  We are pretty certain that a stop in Petrolia is not often on the itinerary for most traveling hockey fans, but perhaps it should be.  You can experience the game here, just as you can in many small towns throughout Canada, in a way that harkens back to a time when hockey was much more simple, and we think much more pure.  You can do this with the aroma of oil in the air as the Squires will hopefully be around for many years to come. Other information about the Petrolia Squires can be found at:  Squires Team Page

Other information about Greenwood Recreation Centre can be found at:  Petrolia Arena Home

More photos of Greenwood Recreation Centre can be found  Here