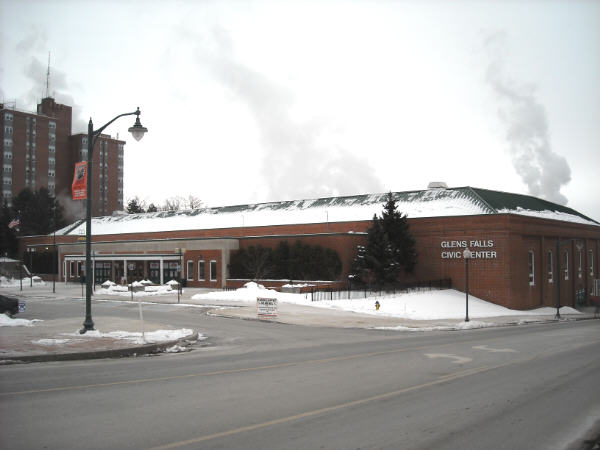 I like small town hockey teams.  I like it even better when the small town hockey team plays in a big-time league like the AHL, so yes I liked, no loved, the Glens Falls Civic Center.   The town about an hour north of Albany has a rich history of hosting hockey, with its teams always bearing the regional "Adirondack" designation rather than the name of the city.  The Adirondack Red Wings were among the most successful AHL franchises winning 4 Calder Cups.  The city then hosted UHL hockey for several years in the early to mid 2000s, before sitting dormant for a couple seasons and then landing the Phantoms (on a basis deemed temporary) after the closing of the Spectrum in Philly.  Nonetheless hockey is back in Glens Falls and there is no better time than the present to catch a game.  The arena itself sits only steps away from the Hudson River, with only a paper mill and 1 street in between.  The building is built into a hill, making it appear small from the main entrance which is  at the upper part of the hill.  Classic brick styling of the exterior and the windows of the building make it blend in to the industrial surroundings of the area.  Frankly if the Civic Center sign was not on the building it could easily be mistaken for a factory or a warehouse.  That is a good thing in my opinion as it just seems to fit.   Steam from the papermill streams skyward from behind the arena.  The green metal roof and nicely kept grounds make the building appealing yet simple.  The arena opened in 1979 but it does not have the feel of many other late 70's/early 80's arenas, so that is a plus as well.  I also like the3 fact that it does not bear the name of some fly-by-night corporate sponsor which would change after the contract is up.  This place has always been simply called The Glens Falls Civic Center.  Hopefully it stays that way.

As the arena is right in downtown but there are various parking lots in the area.  I parked in the lower lot behind the arena and it was quite strange as there were hundred (possibly thousands) of crows circling the parking lot and sitting in trees above the lot.  It seemed like a Hitchcock movie and the car certainly need a carwash after the game.  Entry to the arena is through the main entrance next to the box office.  Once inside there is a small foyer where the team has its merchandise table set up. You then go left or right to get onto the main concourse of the building which runs along the top of the single seating bowl.  The GFCC is simply built, with no luxury suites, and a single open concourse.  All of the food concessions are located in the corners of the concourse, and the press box area sits along the side where the main entrance is.  The seats are sufficiently steep and colored dark green, or light, depending on which section you are in.  I found the color combination odd.  the aisles are yellow.  With seating for 4806, plus standing room all along the top of the concourse this building is the perfect size for the AHL.  It is plenty big enough for just about any team in the league (OK maybe not Hershey) and the sight lines are good from everywhere.  There is no video board, and in all honesty watching a game here is not too different from watching a game in the early 80's when the arena was in its hey-day.  I like simple.  Simple is good.   The rest rooms are down a couple flights of stairs, and reminded me of the set up at the Spectrum, strangely enough the Phantoms former home.  The arena is also the annual home to the New York State High School Basketball Championship, and the foyer has various photos and atrifacts which pay tribute to that fact.

Tickets were not overly cheap.  I did opt for a seat high on the side and it cost $21.33.  This wednesday game against Bridgeport was lightly attended as only 2809 showed up.  The game presentation at the GFCC is typical of the AHL, but not overboard with the between period contests.  The game itself was a doozy.  It was a back and forth battle featuring 4 fights and a shootout which went to 7 shooters and saw the home town Phantoms send the Tigers back to Bridgeport.  It was truly a fun night in a fun building. The crowd on hand was lively and seemed to get into the action.  If this place was full I am sure it would be intimidating to opponents as the seats are very close to the action on the sides.   The arena, although basic has enough quirks to make it interesting, including a zamboni entrance which is between the benches.  The building also oozes with history as the Calder Cup banners of the Red Wings years still hang prominently on one end.  It was hard to see the lines on the ice on this night, and I am not sure why, and also the music over the PA could have been turned up a couple notches.  Although the Phantoms future in Glens Falls is uncertain and likely temporary, hopefully the area takes to the team to attract another franchise when the Phantoms get settled in their permanent home (wherever that may be).  Until then try to take in a game here.  It is the way AHL hockey was meant to be played. 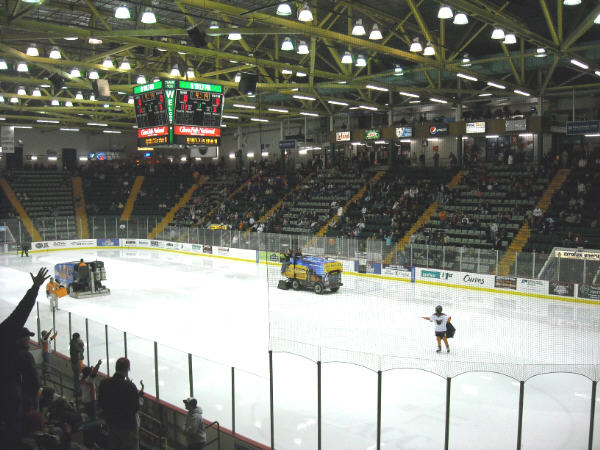 Other information about the Adirndack Phantoms is available at: Phantoms Home

Other information about the Glens Falls Civic Center is available at:  Arena Home