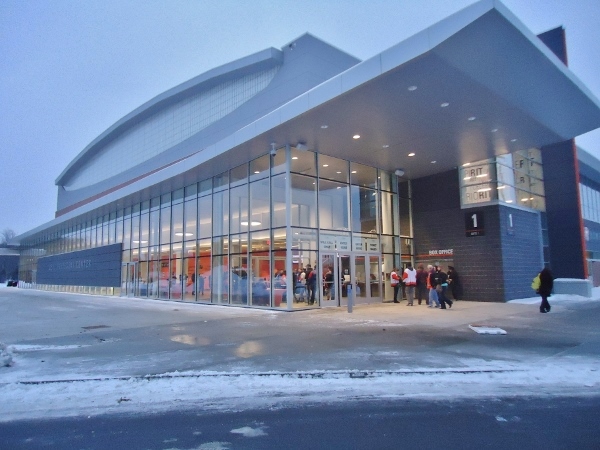 Readers of Roaming The Rinks will know that we don't give grades or ratings to arenas, but rather we try to share the experience of attending a game at a venue so that you can picture that experience and judge for yourself if it is an arena that you want to attend.  Longtime readers will also know that we loved RIT's previous home, Frank Ritter Arena, and loved the character that was housed within its tiny confines.  Admittedly when we heard that Ritter Arena was being replaced as RIT's primary venue we were not happy about it.  How could a new arena contain the energy and explosive atmosphere that the small nature of Ritter Arena produced?  Afterall, an arena is simply a box with 4 walls of concrete and steel and seats to watch the action.  Well, at RIT they have done a great job capturing the tradition and vibe that made RIT a can't miss hockey destination and were able to transfer it to the modern, comfortable confines of the Gene Polisseni Center.  Located a few hundred yards across campus from Ritter Arena, the short walk between the 2 venues can seem like miles on a cold winter day in Rochester.  In a way the arenas are miles apart in design, but are bonded together with the spirit that makes a RIT Tigers game so fun.  The arena is a bit hard to find as it is on the back edge of the large campus.  The modern exterior features a large glass facade which looks into the lower lobby.  The profile of the building is easily recognizable as that of an arena, and the dark gray and red bricks, as well as the opaque glass at the end of the arena below the roof line, add to the modern look of the facility.  There is a brick courtyard in front of the main entrance, and a small raised-letter sign sits at the front of the glassed in lobby wall which looks very collegial.  A small walk-up box office window allows fans and students to secure their tickets, and reserved seat tickets for this Atlantic Hockey matchup against Army were $15.  The Polisseni Center has all of the design trappings of a new-school arena, having opened at the start of the season, and certainly is nice to look at from the outside, despite being a bit of a basic design.

Once through the doors of the Polisseni Center you find yourself in the lower lobby, which sits below the main seating bowl on one end and one side of the arena.  The lobby is modern as well, and is dripping with evidence that this is not simply a new building, this is RIT's home.  There is a team merchandise store in the corner of the lobby which is named "spiRIT" and sells a nice selection of Tigers gear.  There are team photos on the walls, some of which are painted orange.  The nicest feature of the lobby is a well designed mural featuring a tiger logo, which is done in a modern artistic way, and sits between the RIT sports Wall of Fame, and the trophy case which houses the school's championships, including NCAA Division 2 and 3 hockey titles. To access the seating bowl you go upstairs and come out on a reasonably wide concourse which spans behind the seating bowl.  As is the trend with new arenas there are club seats for the "important folks" which are separated from the other seating.  The upper concourse which runs behind the club seats contains a restaurant and bar which is only accessible to club ticket holders, therefore the upper concourse does not allow you to walk all the way around the arena.  The arena features an open ceiling and has mainly gray walls, as well as 13 rows of seats circling the ice, which are black and gray.  The club seats are padded, and the entire end which is considered the student section is made up of gray plastic bleachers, although the students stand the entire game anyway.  The rest of the seats are modern plastic seats.  The whole building has the modern industrial look, and the gray and black color palate reinforces that look.  The sight lines are good, and in addition to the seats there is a standing rail along the top which features a shelf to hold drinks, and offers a great vantage point.  There are various food concessions along the upper concourse, and additional concession stands in the lower lobby.  The capacity of the Polisseni Center is listed at 4300, which is quite a bit more than Ritter Arena, which held 2100 and was packed every night.  In addition to the club section there are luxury suites above the concourse for those so inclined.  The ceiling seems a bit low, and there is no center ice scoreclock, but there are a pair of scoreboards above the seating areas on the sides of the ice.  As you would expect with a venue that opened a few months ago, there are state of the art video boards, in this case one on each end above the seating area.  The whole setup is a few steps above Ritter Arena when it comes to comforts, but it does feel like a warm home for the Tigers, and an intimidating place for opponents.

When we think of vocal and passionate fans we think of the RIT Corner Crew. They so impressed us in our visit to the Tigers old home that we consider them the best cheering section in hockey.  The gameday experience at the Polisseni Center is largely led by the actions, and the passion, of the Corner Crew.  The Corner Crew's presence is made known from warmups through the end of the game.  The routine is largely the same as it was at Ritter Arena, with loud, choreographed chants, props, and a crazy group of students who truly act as a 6th skater for the Tigers.  The giant bell which was rung after goals has been transported across campus and sits in its rightful spot on the concourse above the Crew. The band is enthusiastic and into the action, which helps build the energy of the fans, which in turn makes the band play with more spark.  Despite being a new building there are a few quirks which we like, including the fact that the team benches are on opposite sides of the ice.  The school uses the video boards to their full potential, with a great pre-game pump up video and replays of key plays on the ice.  At intermission things get a bit hectic, with lots of on ice events, including peewee hockey, and a rib eating contest which took place during the second intermission.  The Tiger mascot makes his rounds, but gets lost a bit in the overall game presentation.  There is so much going on at intermission that the zambonis drive at top speed to flood the ice.  Despite all of the fanfare at intermission this is a pure hockey environment, and the fans are knowledgeable and into the game.  There are also a couple other unique aspects to attending a RIT game, including the sign language of the National Anthem and subtitles on the video board, as RIT has one of the leading deaf education programs in the country, and many of the fans in the stands are hearing impaired.  The Tigers fans did not have a lot to cheer for on this night, and the crowd of 3400 saw Army take a 4-2 win in this contest.  Nonetheless, regardless of the score on the ice you will hear a constant level of organized noise coming from the Corner Crew to try to boost the Tigers to victory.  With the added seating capacity at the Polisseni Center the RIT hockey crowds may not be standing-room-only like they once were, but the atmosphere is still electric.  We generally don't like newer venues because they are often sterile, cold, and lacking in character.  At RIT they have been able to take the energy and buzz in the stands that the hockey program at RIT has been known for, and move that energy a few hundred yards away into a new building that is not simply an arena, but is a home for the Tigers, complete with years of tradition and continued passion by the faithful supporters.  RIT proved us wrong as we thought they could never regain the energy and "fun factor" than fans had when attending a game at Ritter Arena.  We are happy to have been wrong in this case as hockey fans in general are the winner when they are able to experience a game at the Gene Polisseni Center.

Other information about the RIT Tigers can be found at:  RIT Hockey Home

Other information about the Gene Polisseni Center can be found at:  Arena Home

More photos of the Gene Polisseni Center can be found  Here