The Hamilton metropolitan area is full of hockey venues, with every nearby municipality seemingly having an arena.  Rinks keep popping up though, and in the fall of 2013 the multi-pad Gateway Ice Centre opened within sight of the QEW Freeway in the growing town of Stoney Creek.  Stoney Creek has had its own hockey tradition for quite some time, with a Junior B club known as both the Spirit and Warrior occupying various arenas in the area since the 1970's through the 2012-2013 season.  The Allan Cup Hockey League's Generals arrival marked a return of sorts of big time hockey to the Stoney Creek area.  The building has a bit of a warehouse look from the outside, and the gray cinder block and white metal siding on the exterior blends in with other industrial buildings in the area.  The boxy look of the exterior is spruced up a bit by a ornamental stone facade near the main entrance, as well as a large backlit sign above the main entry doors.  In addition to the ice pads the facility also features a fitness gym on the lower level as well as a Don Cherry's Sports Grille which can be enjoyed by arena patrons and area diners alike.  The structure of Gateway Ice Centre is nothing fancy, and rather utilitarian in its appearance, but it serves its purpose, and still looks nearly new from the outside.  A small but sufficient parking lot is adjacent.  Entry into the building is through the lower level one one end, and once inside you find yourself in  the spartan lower lobby, which features an information desk, access to the ice pads, and a small food concession stand.  Fans attending the Generals games are directed up a narrow stairway to the main concourse level where tickets are on sale and the arena seating can be accessed.  Tickets for this Saturday night matchup against Dundas were $12 for general admission.  With quite a few nearby rivals and an entertaining fast-paced style of play we think the Generals are a good fit for Stoney Creek and they give the fans a bit of an option in the crowded market which also features the OHL, Junior A, and Junior B teams all within 20 miles.

Once past the ticket table and the merchandise table set up in the lobby you can access the arena either by going through the Don Cherry's restaurant and over to the grandstand, or by walking around the aisle that runs the length of the ice and over across to the grandstand which sits on one side, elevated over the ice.  This layout is that of one of the new style seating-over-the-locker-room configurations, and there are 8 rows of blue plastic seats. Per the arena website there are 800 seats total with capacity for an additional 500 or so spectators in the standing area behind the grandstand, the aisle on the opposite side of the ice as well as the restaurant.  We are pretty sure a crowd of 1500 could squeeze in here without any problems.  The seats are pitched rather steeply and do not have arms, but since they are elevated with the front row being 12 feet or more above ice level there are blind spots along the near boards.  As with most Ontario venues there is netting covering the entire spectator area.  The building still looks new, and the high ceiling features open duct work.  A basic scoreclock hangs above center ice, and a decent sized pressbox hangs over the walkway behind the grandstand area. The interior is rather stark, with white walls and white rafters.  Aside from a few Esso Cup banners hanging across from the grandstand the entire interior is white and plain. The restaurant viewing adds a bit of an upscale feel to the arena, which is otherwise a simple community rink with a decent seating capacity.  Despite the Generals being a relatively new franchise there was quite a bit of merchandise on sale including jerseys, jackets, and pucks.  Gateway Ice Centre is certainly nothing fancy, but it is a good sized venue for the crowds drawn by ACHL, and the arena certainly fits well within the footprint of the league.

The game day experience and presentation at Gateway Ice Centre for a Stoney Creek Generals game is centered around the on-ice action and is laid back.  There are few promotions or sponsor announcements, and nothing takes place at intermission aside from flooding the ice.  That is not a bad thing in our books, and the crowd here is educated and understands the game.  The intermission does not even have the game clock running, as once the ice is re-done it is time to start the next period.  The crowd is quiet and a small crowd of a couple hundred fans spread out in the grandstand, restaurant, and along the standing area on the far side of the ice.  There is music during warmups and all stoppages, mostly consisting of dance music.  The PA is loud and announcements clear.  There was lots of action in this back and forth game as the Generals outshot Dundas 58-36 and took a 8-7 win.  With the Generals still being the new game in town, and with so many other hockey options in the area, it is good to see the team starting to build some momentum.  The team is good and the skill level of the league is very high.  For a $12 ticket the entertainment value of the game is certainly worth it.  They seem to be doing a good job getting the team brand out there to the public, with a good selection of merchandise, but senior hockey seems to continue to fly under the radar in a lot of places despite its high skill level and entertaining style of play.  We have often called the ACHL the best league that those is the U.S. have never heard of.  It will take time to build a bigger fanbase and for the arena to develop a bit of character and over time hopefully the Generals fans will develop their own traditions.  Fans is Stoney Creek, or those in the greater Hamilton area, should check out a game here as hockey purists will certainly enjoy the action, and the pace of the game will be appealing to more casual fans as well.  Although the design of Gateway Ice Centre seem similar to many newly constructed arenas this is a bit more than a community arena, and with the chance to see high level hockey here, and even grab a meal at Don Cherry's, this place is worth a visit. 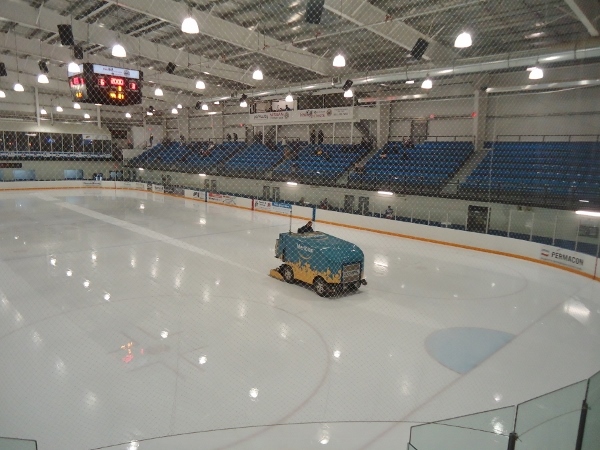 Other information about the Stoney Creek Generals can be found at:  Generals Home

Other information about Gateway Ice Centre can be found at:  Arena Home

More photos of Gateway Ice Centre can be found  Here