The evening stop on our 2 game double found us in Gananoque, only about 15 minutes east of our afternoon stop in Kingston.  Even the most ardent hockey fan may be asking "you went where?" as the Eastern Ontario Junior Hockey League flies under the radar, but provides a decent brand of hard working Junior B hockey.  We weren't sure what to expect as this was the first foray into EOJHL territory, but we came away quite impressed with the play and organization of the team and league.  Even better than that-  the stop in Gananoque fit the travel schedule perfectly, allowing for a great Sunday of 2 entertaining games and venues.  The official name for the arena is the Lou Jeffries Gananoque & Township of Leeds Thousand Islands Recreation Centre.  It is a nondescript old fashioned looking hockey barn which sits on the main drag in town across from a shopping center and a block or so away from some hotels.  In fact our first ever arena-chasing trip into Ontario found us staying only a hundred yards away at a nearby hotel and never realizing that this arena housed junior hockey action.  There is parking in front of the entrance and a side parking lot which sits along the edge of the building.  An electronic marquee sign sits along the road and announces upcoming community events.  The arena itself opened in 1973, but is well maintained and there appears to be fresh paint inside and out.  The exterior is all business, with green metal siding above about 7 feet of white-painted cinder blocks which make up the lower portion of the building.  It's settings like this that you picture in your mind when thinking of Junior B hockey, despite that not really being the case anymore with the plethora of new community arenas springing up across North America over the last 15 years.  Junior hockey has existed in Gananoque for quite some time, and this arena also hosts an annual CIS game between Queens University and RMC, as both schools are in nearby Kingston.

The Islanders set up a ticket table inside the front entrance and admission for this Sunday night game was a mere $7.  The lobby and concession area are essentially one room, with a decently priced snack bar and a few tables set up in the lobby.  Along the walls are trophy cases and a chuck-a-puck and 50/50 table are set up as well.  The lobby is nothing fancy, but serves its purpose.  Windows in the lobby overlook the arena itself.  Once inside the arena doors you find a very nicely maintained, single grandstand layout.  There are 8 rows of wooden benches laid on top of a gray concrete slab.  Most of the benches are blue, with the center ice section being red.  There is a wide landing at the top of the bleachers and a standing rail which makes for additional area to view the game.  The back wall behind the grandstand has silhouettes of hockey players and figure skaters painted on the surface of the walls. There is also quite a bit of standing room on both ends of the ice.  There is lots of advertising signs throughout the arena, and the boards and glass look almost brand new.  Due to the rather low ceiling there is a single scoreboard on the far end of the arena.  For an arena from the 1970's everything looks remarkably well maintained. Unfortunately there is netting in front of the entire grandstand, which is always a drawback.  There are 2 pressbox type rooms hanging from the ceiling on 2 corners of the arena, and I would guess the seating capacity at around 800.  In an out of the way corner of the arena atop the upper landing behind the grandstand there is a hand- painted mural showing a hockey player and declaring Gananoque as the gateway to the 1000 Islands.  If you don't walk around the whole arena you would easily miss this painting, while may have been there since the arena opened.

The game night presentation at an Islanders game is basic, but enjoyable.  There is a chuck-a-puck contest at intermission and the usual music during stoppage, although the PA operator did seem to recycle the same dozen or so metal songs over and over throughout the game.  Despite a 7:30 start on a Sunday evening a good crowd filled all of the standing area and most of the grandstand and seemed to really support the Islanders.  The fans were vocal and into the game, and the feeling you get of small town, hard nosed hockey is evident as soon as the game starts.  The hometown fans had a lot to cheer about as the Islanders took a 6-1 win over rival Westport and dominated the entire game.  I was impressed with the entertainment value of the play, as there was a lot of hard hitting and chippy play and a relatively fast pace to the game. There was an excellent scrap, and the game just had a fun feel to it.  You don't get to experience hockey like this at a 10 or 15,000 seat arena.  It would be easy to drive right by the Lou Jeffries Gananoque & T.L.T.I. Recreation Centre without giving it a second thought like we did a few years ago, but if you want to enjoy hockey in an immaculately maintained old fashioned barn, played by hard working junior players at a great price this place is definitely worth a stop. 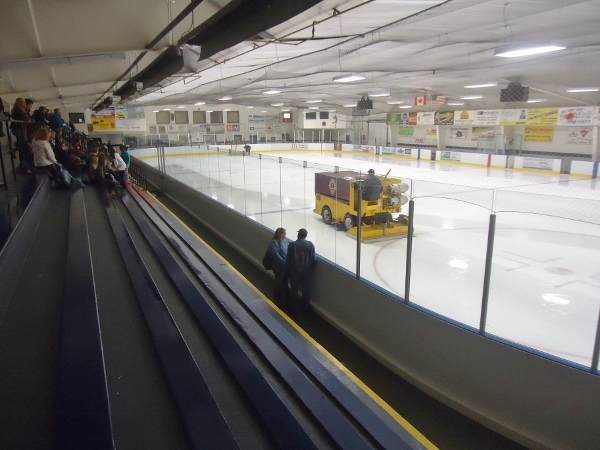 Other information about the Gananoque Islanders can be found at:  Islanders Home

Other information about Lou Jeffries Gananoque T.L.T.I. Recreation Centre can be found at:  Arena Home