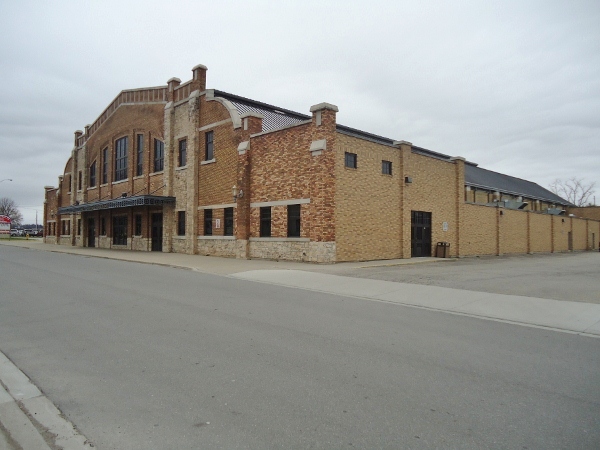 The oldest continually operating McDonald's restaurant in the world sits in Downey, California  The oldest continually operating roller coaster is in Luna Park in Melbourne, Australia, and has been thrilling riders since 1911.  Our Canadian brothers to the North can even lay claim to the oldest continually operating baseball grounds, Labatt Memorial Park in London, Ontario where the sound of the bat and ball has been heard since 1877.  Obviously being able to see and experience the "oldest anything in the world" is an experience in itself, and Galt Arena Gardens in Cambridge is billed as the oldest continually operating hockey arena in the world.  This magnificent arena opened in January of 1922, and has been the home of hockey in Cambridge ever since.  The arena sits in a residential area, next to a city park, and has one of the most impressive brick facades you will ever see.  The exterior is immaculately preserved, and has amazing details, down to the arena name being formed into the large black iron awning.  There are stone pillar type accents on the front of the building, and each side of the arena is flanked by a smallish parking lot.  A black metal roof sits above the ancient wooden ceiling.  You couldn't build an arena like this anymore, and it is a treat to get to experience not only a building this old, but the game action inside as well.

Just inside the front doors is a box office window, and it is evident that renovations have been done in the entire building.  There are trophy cases in the lobby, and many pieces of arena history playing tribute to Gordie Howe who suited up for the Galt Red Wings in mid-1940's.  The lower hallway and lobby also have a concession stand and a simple merchandise table selling programs and Winter Hawks gear.  There are 2 narrow hallways underneath the seating area which lead to the locker room facilities.  There is even an old fashioned standings board in the hallway which lists the standings in the Mid-Western Division with small individual letters which are arranged on a magnetic board.  You don't see that much anymore.  To access the seating bowl you go up one of the staircases at the corners of the arena.  What you see when you get to the top and go through a door is a completely modern seating area of the arena.  All of the seats are newer maroon plastic seats added in 1997.  Five rows of seats go around the entire arena, although there are only 3 rows of bench type seating on the near end of the arena as there is a glassed in meeting room where beer is served there.  The most obvious feature which tells you that this building is almost 100 years old is the wooden ceiling.  Cleverly there are sky lights built into the roof to give added light during the day.  With so few rows of seats sight lines are just average as almost everyone has to look through the glass, although if you can snag a coveted standing spot along the rail the view is awesome as you are at the top of the rink, yet still very close to the action.  There are press box type rooms in the corners, and a small but adequate center ice score clock.  If you were blindfolded when you walked in past the 1920's exterior you would have little evidence that you were in a building that old once inside due to the modern renovations.  Like any good old hockey arena in Ontario there is the requisite portrait hanging above the end of the ice.

Thankfully there are a couple displays on the corners of the concourse paying tribute to Galt Arena Gardens' past.  On display are some of the original seats, old painted signage, and even the old barrel with wheels used to flood the ice before Frank Zamboni's invention came about nearly 30 years later.  In keeping with the theme of paying tribute to the arena's past there are very large murals on the end wall, including ones of NHLers Gordie Howe and Kirk Maltby, who grew up in Cambridge.  The building itself has a rather small footprint, but the new renovations, although not as true to tradition as wooden seats would have been, make the arena seem modern and comfy.  There is an additional concession stand in one corner of the concourse, and a wide enough concourse to sneak by folks standing along the rail if you need to walk around.  The renovations lowered the seating capacity of the arena to only 1,100, although with the standing room and folks crowding the beer garden meeting room on the end of the ice you could easily top that number in total capacity, as they did for this playoff game against the Brantford Golden Eagles.

The game experience at tonight's Winter Hawks game was all business, but very intense and fun indeed as Junior B playoff action is always incredible.  Add is a full house of fans who were there to support the home town Winter Hawks, a couple bus loads of fans from Brantford there to cheer for their golden Eagles and you have the recipe for a fun time.  Ten bucks for a ticket to such hard nosed hockey is a bargain, and being so close to the action in such a historic barn is what watching hockey is all about.  The fans seem to get into the action, and are very knowledgeable, but not afraid to get loud either.  The PA system is excellent, and the building has a very clean feel to it.  Being there to experience the Winter Hawks blow the game open in the third to win 5-2 after trailing 2-1 after 2 periods was why we go to these arenas off the beaten path.  You can experience 20,000 fans cheering their team in an NHL building, but watching hockey played at a high level, in a place where it has been played for over 90 years, in front of a packed house is what its all about. 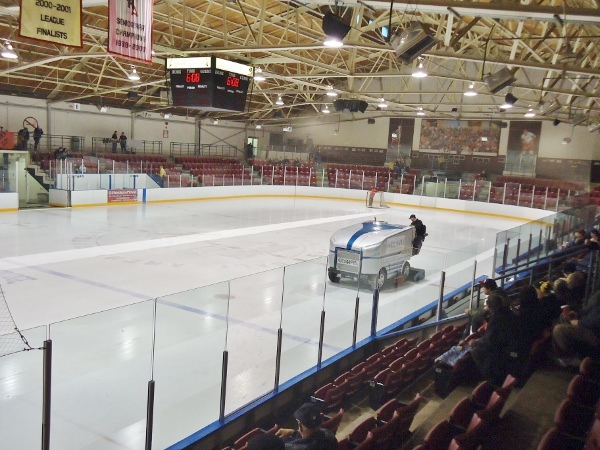 Other information about Galt Arena Gardens is available at:  Arena Home