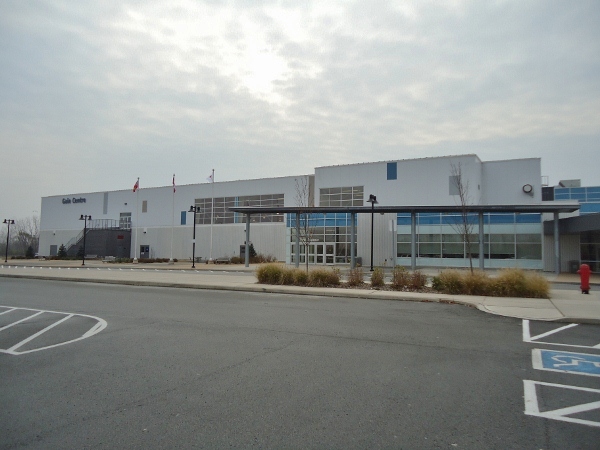 Niagara Falls  is one of the most famous tourist destinations in the world.  When most people think of the town they think of the falls themselves, or the touristy attractions and carnival type atmosphere of the Clifton Hill area.  What most out-of-towners don't realize is there is a really nice, virtually new hockey arena on the North side of town which houses the GOJHL's Niagara Falls Canucks.  Unlike most RTR road trips this one was not all about the hockey as my bride and I were in town to celebrate our 13th anniversary.  You know I had to squeeze in a hockey game too though, right?  The Gale Centre opened in 2010 and is a modern 4 pad facility with a large parking lot.  The exterior, although rather spartan, is of modern styling.  The exterior walls are gray and pale blue, and the signage on the building consists of only a small raised letter sign on one corner of the building.  There is a neat sculpture of a hockey player on the concrete walkway in front of the building which looks like a Canadian version of the tin man from the Wizard of Oz.  The entrance area features an overhang and large glass windows, and there are also a set of windows on the second level, which actually look out from the concourse of the main arena where the Canucks play.  There is only one road into and out of the complex, so there is a bit of a traffic backup after games.  You do get to pass a very well equipped 2 rink street hockey facility on the road in though, complete with grandstands and scoreboards and lights.  Despite this being a multi-pad arena whoever designed the Gale Centre did a great job at making the main arena feel like a stand alone facility as that arena, although connected to the others by a large hallway on the lower level, has its own exterior entrance, complete with a box office and lobby.  Once you buy your ticket you ascend a steep set of stairs to the main arena and come out on the wide concourse which runs atop the seating bowl.  The separation of spaces makes the Gale Centre different than the other multi-pad arenas where I have seen junior hockey.

After paying $8 apiece for tickets and buying a program in the box office lobby it was upstairs to the rink.  The seating bowl features 10 rows of plastic seats and they are laid out in a horseshoe design. The end of the arena without seating has a concession stand and beer garden area with tables along the concourse overlooking the ice.  There is a pressbox above the seats on the side opposite the team benches.  There are some windows which look out over the parking lot next to the staircase entrance.  The first thing that becomes apparent when looking at the arena brings to mind the question "what's up with the pink seats?".  The middle section of seating features 2 rows of pink seats.  The rest of the seats are blue.  A well placed sign on the concourse next to the concession stand explains that the seats are in honor of breast cancer and fans are encouraged to make a donation to get small plaques with their names on their seats, with the proceeds going to charity.  This makes for a unique appearance of the arena.  This takes the idea of wearing pink uniforms or painting the ice pink for one game to a new level as the seats are a permanent fixture at the Gale Centre.  The sight lines are good, however unfortunately the arena features the dreaded netting in front of most of the seats and there is netting covering the entire seating area except for the area behind the team benches.  We hate this type of setup, but you get used to it after a while.  There is also ample standing room along the rail above the seats, and the concourse which runs around the entire arena is amazingly wide.  The capacity of the arena is listed at 2,000.  The Junior B franchise in Niagara Falls has been very successful and there are an abundance of banners hanging above the concourse on one end.  Overall for Junior B hockey the size and layout of the facility are almost perfect.  if you enter the building though the other entrance there is a wide hallway featuring a pro shop, additional food concessions and access to all 4 rinks and dressing room areas.  The business and amount of people coming and going in the hallway, coupled with the vendors and overhead screens indicating what is going on is each arena reminds you of an airport.

The game day experience at a Canucks game is quite fun, and closer to a minor pro level of presentation than what you would think of at this level.  There are a ton of prizes given away from lucky numbers in the program, and there are some other giveaways during the night as well.  The PA system is very clear, and there is a good mix of songs played throughout the night.   The center ice scoreboard is functional, but nothing fancy.  The level of community support is evident as there is a lot of advertising in the program and along the boards of the arena.  This game featured a non-traditional opponent in the Strathroy Rockets. The crowd listed at 937 was rather quiet and subdued during the game, despite a back and forth battle which found the Canucks taking a 5-4 win.  I would think that the atmosphere and crowd intensity would be better when taking on one of the local rivals such as St. Catharines or Thorold.  Nonetheless the Gale Centre is a good place to take in a game.  I you are in town to do the touristy things near the falls a trip across town to catch some Junior B action would be well worth it.  The price is right and it is always fun to see hard working players battle it out on the ice. I would be you have never watched a game while sitting in pink seats anywhere else either. 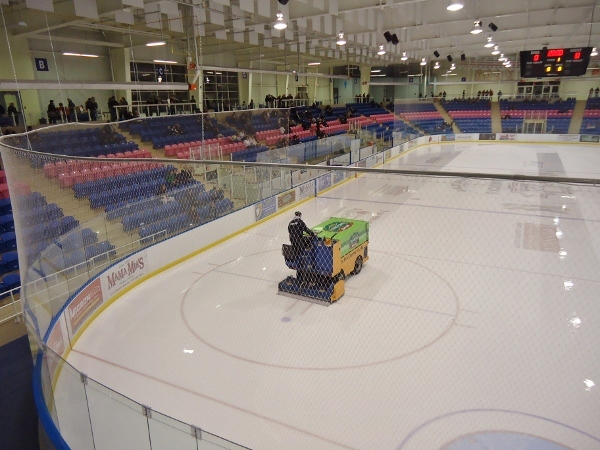 Other information about the Niagara Falls Canucks can be found at:  Canucks Home

Other information about the Gale Centre can be found at:  Arena Home

More photos of the Gale Centre can be found  Here