If you have been a reader of RTR for any length of time you know that we don't do the NHL.  It's just not our thing.  That doesn't mean that we don't want to check out the venues and check them off our list, so the Rochester Americans game at First Niagara Center caught our attention.  With the NHL closed down for the Olympics the Triple A club moved in for a lone game and we had a chance to catch the action.  First Niagara Center opened in 1996 along the Buffalo waterfront, and has gone through several bank related name changes during its day, and has undergone several renovations, including the most recent in 2012 which now has hockey seating capacity at a little over 19,000.  The building is currently undergoing a bit of exterior construction as the attached HarborCenter will feature a hotel, commercial space and, more importantly, a new arena which will be home of the Buffalo Junior Sabres and the Canisius Golden Griffins.  With big time arenas come big time pricing, and parking even a couple blocks away for this AHL game was $10.  Single digits temps made us pick up the pace walking from the car to the arena.  A ticket to this matchup between the Amerks and Grand Rapids was $20 for a seat in the lower bowl.  The arena itself has a classic round concrete shape, but additions of a lobby and adjacent parking garage somewhat obscure the profile of the building.  An exterior courtyard, known as Alumni Plaza, has murals of Sabres history, and a statue of the French Connection line made up of Perrault, Martin, and Robert.  The main lobby is spacious, and has multiple box office windows.  The Greater Buffalo Sports Hall Of Fame sits on the lower level, across from the Sabres well stocked gift shop, which also had quite a bit of Amerks merchandise.  The blue and yellow trim leave no doubt that this is home of the Sabres, and despite the building's age it seems state of the art.  The high glassed-in lobby area makes the building feel very large.  Buffalo is a hockey town, and the Sabres have a home that may not be the most cutting edge, but is up to par and able to accommodate crowds approaching 20,000.  We had hoped to take in action when the World Juniors took place here in 2011, but were not able to make the trip.  With Terry Pegula owning both the Sabres and Americans, an annual game for the AHL club has taken place in Buffalo the last couple seasons.

Everything about the arena has that NHL feel, including the shake down at the turnstiles by security guards with metal detecting wands.  You know, because a half empty arena for AHL hockey is always a prime target for a terrorist attack.  After being reminded why we don't go to these type of arenas we were again impressed with the overall feel of First Niagara Center.  The main entry lobby is a tribute to the tradition of the Sabres, and features a bar at the top of the landing that you reach after going up to the main concourse level.  A Sabres timeline murals stretches a hundred feet or so across the lobby, and features great moments and great players in Sabres history, including LaFontaine and Barasso.  The lobby has an impressive feel to it.  For the AHL fans on this night a free lineup sheet was provided.  The main concourse is wide, and features blue and yellow walls in keeping with the Sabres theme.  The concourse is full of nearly every type of food vendor imaginable, and also has merchandise shops and the like.  It is like a mall, only the vendors are selling $10 beers, $9 sandwiches, and $6 slices of pizza.  There are steep escalators going up from the main concourse to the 300 level, and there is an additional, although more narrow, concourse with vendors up there to service the folks in the nosebleed seats.  The first view of the ice and seating bowl is impressive, with nearly 20,000 blue seats overlooking the ice, a huge center ice video board, and ribbon boards extending around the arena.  This was a sharp contrast from our stop 10 minutes down the road in Cheektowaga earlier in the afternoon to watch some Junior B action in a 1500 seat barn for sure.  There are 2 levels of luxury suites in between the upper and lower seating bowls, and the high ceiling with exposed rafters magnifies the sheer size of the building.

Clearly it is hard to get a feel for the normal gameday presentation in a scenario like this where the Amerks only play one game a year at this arena, but we were impressed with the NHL style gameday presentation.  The light show where the ice was turned into the Canadian and American flags during the anthems was awesome, and the general feel of the way things took place was that of a first class arena.  Attendance was listed at over17,000 on the game report, but included all of the Sabres and Amerks season ticket holders in that number.  In reality the place was about a third full.  The Amerks have had a bit of experience just this season playing in non-traditional places, as they played outdoors at Frontier Field in Rochester, played in Switzerland at the Spengler Cup, and now here in the home of their parent club.  There were quite a few Rochester fans here for the game, but with such a large building the vocal fans had a hard time making an impact on the noise level in the building.  The "Lets Go Amerks" chant did get going one time, but for the most part, with Grand Rapids taking a 5-1 win there was not a lot for the fans to get excited about.  A single scrap at the end of the game gave the fans that stuck around until the end a little bit of entertainment in what was otherwise a boring game.  Buffalo clearly has a great hockey tradition, and we are thankful that a bit of that is preserved at First Niagara Center as there is a full row of seats from the Buffalo Aud on display on the concourse.  First Niagara Center would certainly be a rockin place with 19,000 fans cheering on the Sabres.  The sight lines are good, and amenities are comfortable.  It was great to be able to spend some time in the arena watching a high level of hockey without the NHL ticket prices, and be able to get a feel for the place.  Hockey in a classic place like Buffalo on a night with single digit temperatures outside just seems like it is the way things are supposed to be, even if it is not NHL hockey within the walls of First Niagara Center. 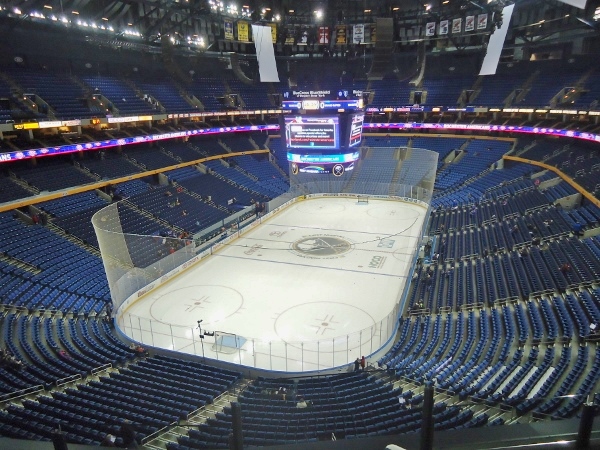 Other information about the Rochester Americans can be found at:  Amerks Home

Other information about First Niagara Center can be found at:  Arena Home

More photos of First Niagara Center can be found  Here