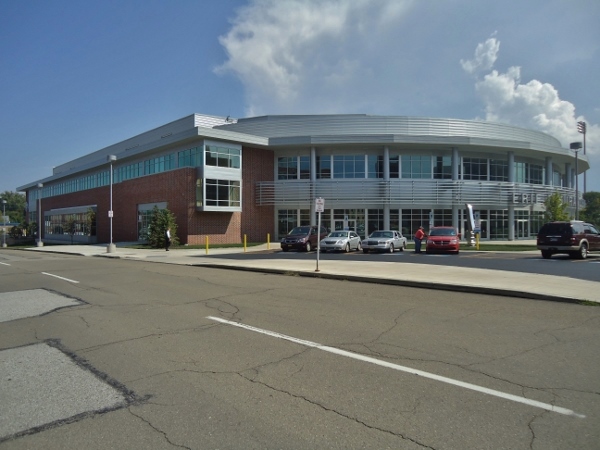 Although it is not how we usually operate we are providing this arena review of our time at Erie Insurance Arena despite the fact that this is not our first trip to the venue.  We saw Otters OHL action here back in 2009 and provide a write-up of the arena, then known as Louis J. Tullio Arena.  We decided to return after the huge renovation which was completed just before the start of the 2014-2015 season, as the building was transformed into a structure that looks completely different from the exterior, and has added quite a bit of seating, with the capacity now listed at 6833 for hockey.  The arena sits in downtown, and is adjacent to Jerry Uht Park, home of the AA level baseball Erie Seawolves.  How close to the ballpark is the arena?  Close enough that the wall of the building makes up the outfield wall of the stadium.  A yellow line painted on the brick facade of Erie Insurance Arena designates home run territory at the ballpark.  This being a preseason Otters contest on Labor Day weekend, the Seawolves were in action at the same time next door.  The exterior of the arena used to look like a prototypical 1980's style arena, with concrete walls and gaudy orange accents on the wall.  What you will find today is a clean, professional, almost modern-colonial looking arena.  The exterior walls are made of a classy brick, and look similar to the nearby Erie Insurance headquarters.  The entrance of the arena has a large, rounded glass lobby which provides access to the box office area.  The lobby is built into a small hill, with some steps going down from the lobby area to the ballpark.  Stainless steel accent pillars and a simple raised letter sing proclaim the name of the venue, and the stylings of the building may remind you more of a building you would find in a corporate office park than a sports arena.  A parking area used to sit in front of the lobby area, but now a grassy lawn and landscaping extend to the end of the block, offering a revitalized look to the property.  As the name of former Erie Mayor Louis Tullio no longer appears on the building the plaza and patio in front of the arena is now named in his honor.  The upper walls of the arena feature windows, many of which look out from the newly added luxury seating which sits atop the seating bowl.  Originally built as the Erie Civic Center in the days of rough and tumble hockey in the 1980's, the venue, although having the same bones, looks much more refined and classy, and is a venue that can certainly keep hockey fans happy in the Erie area for decades to come.

We certainly enjoy the OHL product, and as this was the opening exhibition game there was a buzz among the diehard Otters fans for the season to start.  Tickets for this game were $10, and were secured at the nicely appointed box office lobby area.  Once inside the gates you find yourself on the concourse, which runs around underneath the seating area and dead-ends at the wall at the far end of the arena.  The concourse is rather plain, but has a clean look, and features windows on one side of the arena which overlook the street.  The concrete concourse floor is offset by tan and brown concourse walls, and the decor is kept rather minimalist and simple.  There are a few food concession stands, some kiosks, and a Otters merchandise section which is set up on the concourse just inside the main entrance.  Rather than having a permanent team merchandise store it appears as though they roll out some racks and shelves and peddle the Otters gear from there.  The concourse is wide, and offers entry to the seating sections about half way up.  Once inside the seating bowl you immediately recognize the end wall which has been a identifying feature of this arena since its opening.  Added are luxury suites which circle the rest of the arena at the top of the seating bowl, and a new upper section of end seats, which significantly increases the seating capacity from the building's prior layout. The seating is made up of 25 rows of maroon seats.  They are padded and offer cup holders, and the sight lines are good.  The first 10 or so rows near the ice are not pitched very steeply, but the rest of the seating is steep enough to provide a good view.  The ceiling is rather flat and has exposed metal beams and ductwork.  A nice, large, clear video board hangs above center ice, while a second scoreboard sits on the end wall surround by a graphics board.  Erie Insurance Arena has certainly changed a lot since its days before the recent renovation.  In many ways it feels like a different building, yet the end wall and features of the arena remind you you are in the same place, albeit an updated one.

We know that Otters fans take their hockey seriously and are among the loudest and most passionate in the OHL.  We'll still give them credit for that.  As this was a Sunday afternoon preseason game against the Hamilton Bulldogs, we didn't expect a large crowd, and the 1500 or so on  hand made their presence known, cheering loudly.  We are sure this place still rocks during the regular season.  The gameday presentation was rather subdued as this was an exhibition, and there were no intermission activities. The team mascot, Shooter, was very active and did a great job entertaining fans young and old.  Replays were shown on the video board and the overall presentation was very professional.  We were a bit surprised during warmups, when both Hamilton and Erie took to the ice with white jerseys and blue pants, but the Otters came out sporting their blue jerseys for the game, eliminating the chance of confusion with both teams wearing essentially the same colors.  The dasher boards were still bare, waiting for opening day to unveil the new advertisements along the boards.  Cow bells could be heard frequently, and the percentage of fans wearing Otters gear was very high, as the diehard Erie fans were all in attendance, whereas some of the casual fans will likely wait until the regular season.  " Lets Go Otters" chants could also be heard, and the boys gave the locals something to cheer about, taking a 4-0 win.  One noticeable thing about the new layout of the arena is that the lighting seems to come from the sides, often providing a glare for fans sitting in seats on the sides of the ice.  We encountered a similar situation at the newly opened Meridian Centre in St. Catherines this past season, and this may be an indication of the way things are headed in arena construction, but it did seem a bit odd and distracting.  The Otters have had lots of success recently, and have a new ownership team which just took the helm after the end of last season, but regardless of the team success Otters fans are vocal, supportive, and there to cheer on their team.  Erie Insurance Arena, and the improvements which have taken place with the structure the last several years, gives Otters fans a comfortable, and state of the art mid-sized arena to enjoy the action that the young prospects of the OHL bring to the ice every night.  Although the 1980's look of the arena has been replaced, the classic hockey feel remains, and it will continue to be an excellent place to enjoy hockey for years to come. Other information about the Erie Otters can be found at:  Otters Home

Other information about Erie Insurance Arena can be found at:  Arena Home

More photos of Erie Insurance Arena can be found  Here