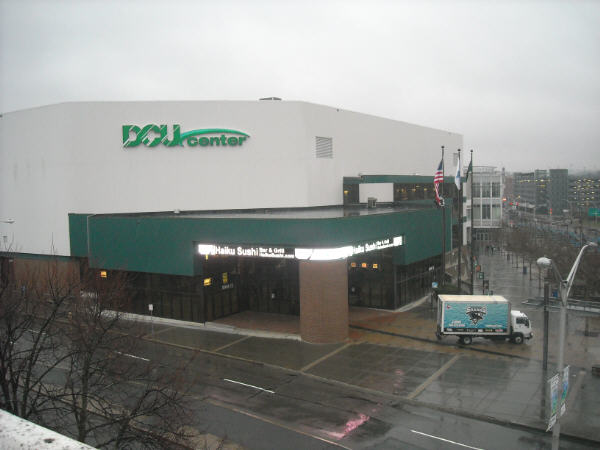 A holiday trip to visit my Mom in the Boston area yeilded a stop in Worcester for an AHL matchup on a rainy Sunday afternoon.   The DCU Center, formerly, and more prominently know as the Centrum, has been home to  the Sharks farm team since 2006, although it has hosted the AHL in one incarnation or another since 1994.  It is an all-purpose arena more commonly known as the home of many of the larger concerts which passed through the Boston area before the TD Banknorth Garden was opened in Boston as the old Boston Garden's design and acoustics made it unfriendly for concerts.   It was not exactly built with hockey in mind, and that is evident when taking in a game here.

This building has the exterior designs which are somewhat recognizable of a building built in the 1980's, having opened in 1982.  There is a newer convention center bearing the same name, and attached to the arena, which could confuse some people as to which entrance to go to for the arena .   There is a large lobby area where the box office windows are located, and the place seems well kept for a building over 25 years old.  My upper level ticket cost  $14.25,  but with the low attendance for this game I was able to sit virtually anywhere I wanted.  I figured having a game directly against a home game for the NFL Patriots would keep some folks away, in reality it looks like it kept most people away from the game.  Although opponent Lowell is 40 miles away neither team had many fans show up for this late afternoon tilt.   Once inside the arena itself you are given a free program and lineup sheet and find yourself on a wide concourse which circles the entire arena, with the usual concession and souvenir stands.  On one end there is a very nice sports bar which the concourse basically runs directly through and there is seating and TVs on both sides of the concourse.  There is a "party deck" of sorts which extends out for standing area behind the bar which overlooks one net.  The standees end up blocking the view of patrons seated in the upper level behind that same net.  From the concourse you can enter to the lower seating bowl, clad with tan colored plastic seats, or go up the stairs to the upper level, which currently features teal seats, which I am sure were either installed after the Sharks came to town, or coincidentally share the Sharks primary color.  The arena also has balcony seating on the sides, but those areas are blocked off for hockey.  Make no mistake about it, this is a large arena, with seating for over 14000, although for the AHL games they block off all but the lower 5 rows of the upper level, as well as the balconies with black curtains to give the patrons a "more intimate feel".  I have seen the same system used at the Philadelphia Spectrum, and honestly it doesn't work that great, although would still look better than entire sections of empty seats even for a larger hockey crowd than normal.  Upon entering the seating area you immediately notice the steepness of the seats (or lack thereof).  As mentioned this place was not designed for hockey, and the gradual slope to both the upper and lower levels means that by the time you are 10 rows back from the ice you are probably twice as far away from the action than at a more steeply sloped arena. The ceiling is really high, giving an almost NHL- type feel to the building.  There are quite a few blind spots, depending on where you are sitting, as the lower seats in the corners appear to be on temporary sort of riser platforms, sometimes blocking the views from other seats.  Also the upper level railing seems to get in the way if you sit on the side of the ice.  If you plan on going to a game here I would say stick to the end seats as the lower level end seating is steep, like at most arenas designed for hockey.  As I am pretty sure the place was built with hockey as an afterthought you just have to deal with it if you plan on attending a game here.  The place does have the nicest video scoreboard I have ever seen, as the picture is crystal clear from anywhere in the arena.  I usually could care less if a place even has a video board, but I will say that the DCU Center has an awesome one.

The game presentation is your usual minor league hockey routine, with games at intermission, although they did have a Radio Controlled airplane dropping prizes to the crowd in place of the more common blimp.   Of course there are the requisite t-shirt tosses as well as the inflatable Shark head which the players skate through at the pregame intro.  I normally like to experience and comment on the atmosphere at the games I attend, in Worcester it is hard to do that as this game pretty much had none.  The announced attendance of 2500 may have included season ticket holders who did not show up.  I am sure the Patriots game had a lot to do with the small crowd, but as expected when you get 2500 fans in a place that seats over 10000 you don't end up with much excitement from a fan perspective.  I would hope that the atmosphere and fun factor is a little higher at a normal game when not competing for the sports fan in the area with the Patriots, whose success in recent years is gaining them a following similar to the Red Sox.  As it was the place was quiet- too quiet.  The game itself saw Worcester take a 2-1 win, but even the players performance seemed to lack emotion and grit.  I must have caught them on an off-night (or afternoon as it was).  One other thing I found odd was how few fans I saw with team apparel on during the game.  I mean you would figure if the game is going  head to head with the Patriots the people who actually would show up would be the hardcore Sharks fans.  You know the type- you can pick them out at most any arena sporting their team jersey and other gear.  In Worcester I saw probably less than a dozen people with jerseys on.  It just seemed strange for a game where you would figure the ratio of season ticket holders to walkup fans would be far greater than normal.  The only other thing I want to comment on is the one fan sitting on the end of the upper level who found it necessary to do the finger-in-the mouth-whistle thing all game long.  You could hear the guy no matter where you were sitting, and I get the impression he does this every game.  I have been to LNAH and QMJHL games in Quebec where the fans come armed with airhorns straight out of a truck, yet this guys seemed to annoy me more than any of those things.  Maybe I was in a bad mood, but to me fans taking the time and effort to drag a large airhorn into an arena and blow it frequently = passion for the team, where as this guy just seemed to want to show the people in attendance that he learned how to whistle loudly.  It is always neat to catch a game in a different barn, and I am not sure if fans in the AHL saturated New England market realize how lucky they are to have such a high caliber of hockey in their backyard.  Despite the slope of the seats and the blind spots this place could be really fun with a packed house in attendance.  The problem comes in where a teams averages 3-4000 fans in a building which hold 10000 or more, as it just seems to put a damper on the excitement level.  Put the same number of people in  smaller barn and you have an entirely different dynamic. Other information about the Worcester Sharks is available at: Sharks home

Other information about the DCU Center is available at:  Arena home

More photos of the DCU Center are available Here