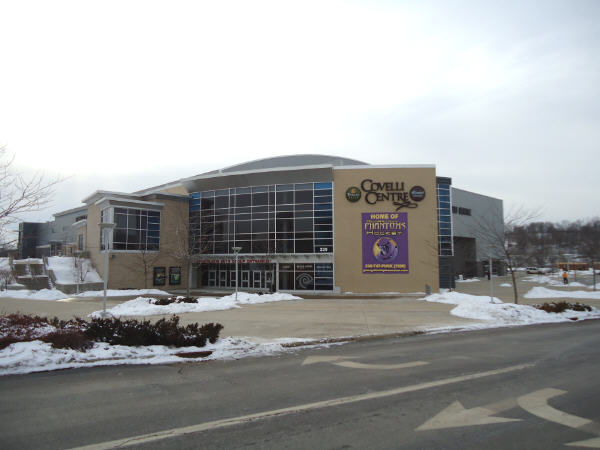 Pop, pop, crack, sizzle, boom!  Fireworks are cool, and thanks to the owner of Phantom Fireworks Corporation the Covelli Centre in Youngstown once again has a hockey team as its primary tenant after the CHL's SteelHounds were booted out of the CHL in 2008.  Being a far Eastern outpost in a league centered in the Midwest and Southwest did not work out.  Since then the Phantoms of the NAHL became the Phantoms of the USHL, and have called the Covelli Centre home for the past 2 seasons.  Now the Phantoms are a far Eastern outpost for the USHL, albeit in a much smaller geographic footprint.  Situated in downtown, near the post office this modern building opened in 2005, and has a large free parking area on site.  The grounds are well kept, and the large main entrance atrium also houses the box office and lobby.  The arena exterior structure itself is mainly a dull gray, but the entrance is made up of brown brick and a high glass wall.   Each end of the building bears the name Covelli Centre in black block letters.  I am not sure if the spelling of the word Centre in the Canadian version rather than the American was on purpose of not, but it fits as this arena was built with hockey in mind.  This 5200 seater is a good example of the newer arenas popping up across North America.  It has a modern look, both inside and out.

The game I attended was a "school day game", with a 10AM start.  When I arrived it was 5 degrees outside, and the yellow school bus caravan was also starting to arrive, bringing kids from area schools for a day of fun at the rink.  At $9.50 the tickets were a bargain, and there really is not a bad seat in the house.  The concourse is rather spartan, but has the usual food concession stands and vendors.  There is a nice team store just inside the entrance, but not accessible unless you are on the concourse, and it had a good stock of decently priced Phantoms gear.  There was also something you would not find at most arenas-  a table showing off various fireworks that you could buy from Phantom Fireworks, although they were not for sale in the arena itself.  The concourse hallways are white and pale blue.  Once inside the seating bowl the sight lines are good, with one level of seats extending all the way around the ice.  Entrance from the concourse comes out a few rows up from the bottom of the seats, and the ice is at the same level as the concourse, so the building is entirely above ground level.  The concourse dead ends so it does not circulate the entire arena.  There is a wide upper concourse on each end atop the seating area, and that area is carpeted, but mainly runs behind the handicapped seating.  As with most newer arenas there are luxury suites, and here they run down each side above the last row of seating.  There is a press box in one corner, and there are flashy message ribbons on each end.  These also serve as scoreboards as there is no center ice scoreclock.  The ceiling is high and the place feel like a scaled down version of an NHL arena in many ways.  Blue plastic seats and rather dim lighting make the arena feel kinda dark, but it is certainly comfortable. There are 2 large replay screens atop the luxury seating, one on each end of the red line.

The game presentation for the Phantoms is very good.  Where else would you expect to fireworks during pregame intros than at a game of a team owned by and named after a fireworks company?  There is a decent display of pyro before the game, and that was fun to see.  The crowds for the Phantoms are not all that great, so it makes the building feel a little empty, although the crowd of about 2600 on hand seemed to enjoy themselves.  They were vocal, and loud, although the group of school kids was not all that knowledgeable about hockey.  They certainly got excited when t-shirts were tossed into the crowd though.  There were entertaining intermission contests and it was a fun atmosphere.  The PA guy is a little annoying as he is the yell-and-scream-type, but otherwise the game presentation was very well run and lots of fun.  The program book was very good and only a dollar.  They actually use the video boards for replays rather than only for a barrage of ads, which is better than alot of places.  I like the level of play in the USHL, and the game was decent, although the Phantom blew a lead and lost to the Indiana Ice 5-2.  It is hard to judge how many harcore fans the Phantoms are attracting as I am not sure how many could take off work to go to a 10AM game on a Wednesday, but there seemed to be quite a few fans who were there for the game rather than the field trip.  I won't say that this place oozed with hockey atmosphere, as although the crowd was loud the arena almost seems too new or too modern.  Give it time however and this place could be good with larger crowds.  I won't judge the atmosphere based on a Wednesday morning game as that has a whole different dynamic than the average home game.  Oddly this was the second morning weekday game I have ever attended, and clearly both games was marketed for the school crowd.  The beer stands were closed in fact.  Ever more ironic is that the other morning game I attended was also for the Phantoms, albeit the Philadelphia Phantoms.  The Youngstown Phantoms colors and theme is certainly recognizeable, as you sometimes see combo packs of Phantom Fireworks in your local department store around July 4th.  The Covelli Centre is certainly a comfortable, professional place to watch a hockey game, and the Phantoms tickets are a bargain.  A visit here would be worth your time, just don't expect a classic old barn as this place is very modern and polished. Other information about the Youngstown Phantoms is available at:  Phantoms Home

Other information about the Covelli Centre is available at:  Arena Home

More photos of the Covelli Centre are available  Here