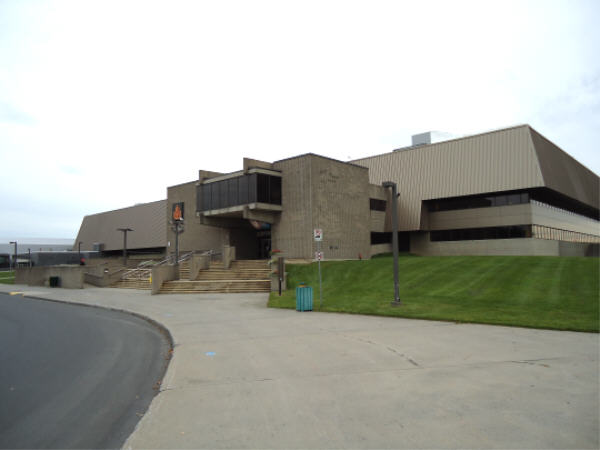 My early season Canadian trip started in Cornwall at the Civic Complex, currently home of the Cornwall Colts of the Central Junior Hockey League, parts of Canada's Junior A system of leagues.  Don't let the Junior A status fool you though, this is a big time facility with a storied history.  The park like complex along the St. Lawrence River and in the shadow of the international bridge which connects Cornwall to Northern New York was built in 1976.  The building itself is referred to as the Civic Complex, but the arena inside is called Ed Lumley Arena, and the latter is what appears on the Colts tickets, although most people seem to refer to the place as the Civic Complex.  We are listing it both ways on this site.  The exterior of the building is a mix of metal paneling at the top and glass windows, along with an elaborate, modern looking tan brick entrance.  The complex also houses other athletic facilities such as the area swimming pool, and when I stopped earlier in the day to check out the building folks were walking and jogging around the concourse of the arena.  Behind the arena is a beautiful lawn along the banks of the river.  Along Water Street is a marquee sign which also has an electronic message board letting passers by know of upcoming events.  The Box office is just inside the main entrance, as is a glass memoribilia case paying tribute to the former tenants, the Memorial Cup winning Cornwall Royals, who spent time in both the OHL and the Q.  Clearly the building is worthy of hosting a higher level league as it has in the past, as in addition to the Major Junior teams the AHL had a short stay in Cornwall as well.  I also remember keeping tabs on the Cornwall Comets, a team in the LHSP, one of the rough and tumble Quebec semi-pro leagues, only a few short years ago.  This place deserves a better hockey product and hopefully the city will get another shot.  The problem is the geographic location.  Cornwall would be more suited to fit into the QMJHL's geography, as it is only an hour from Montreal, but its Ontario location, and further distance from many of the eastern teams would hinder it.  If it were to join the OHL it would become the farthest eastern team, and likely face resistance from other OHL owners.  It is also pretty far from other AHL teams, and a relatively small market.  Regardless of the Tier 2 designation of the game I had a fun time in Cornwall.

A ticket to a Colts game will set you back 12 bucks, and with a capacity of 5,000 the arena is actually too large for this league.  Renovations in 2008 actually added a thousand seats to the lower level of the rink.  If this place looks familiar it is probably because you have attended a game in either Binghamton or Wheeling as the arena is a carbon copy of both of those, with Binghamton's arena opening in 1973, the Civic Complex in 1976 and WesBanco Arena in Wheeling in 1977.  Clearly all three share the same design.  I love the steep seating.  The sight lines are amazing.  The four seperate grandstands do not connect to each other, but the lower level red seats which were added in 2008 circle the rink.  The upgrades were made so Cornwall could host the RBC Cup, The Junior A version of the Memorial Cup.  The scoreboard is basic and there is no video board.  Seperate shots-on-goal clocks, one for each team, sit high above the end seating.  It is weird looking at one end to see one teams shots and then the other end to see the other teams, but it is a neat quirk.  The zamboni door is in the middle of the rink, next to the penalty boxes.

The concourse of the arena is wide enough, and certainly not very crowded with a crowd of 1200 on hand for this thursday night game.  The concourse has windows which allow fans to look out into the parking lot and outside the building.  Yellow rafters are clearly in view from the seating bowl and yellow accents dot the concourse.  The architecture is interesting as like Wheeling and Binghamton you can see the concrete structure of each grandstand from the sides as you look from the concourse, a feature that is hidden at a lot of arenas.  What I especially enjoyed about the arena in Cornwall is how the arena plays tribute to past players who have skated on this same ice.  Large murals of past Royals stars such as John Wensink, Doug Gilmore and Dale Hawerchuck appear on the concourse.  The town is proud of it history and that is great to see.  The game experience is decent here, although the empty seats seem to take away from some of the excitement.  A crowd of 1200 is good for CJHL action, it just looks small in the league's biggest building.  A small souvenir counter sits just inside the main entrance, although it was not too well stocked on this occasion.

I definitely caught a Colts game on a good night as the pep band from Clarkson University was on hand to fire up the crowd.  The fans really enjoyed it, and I even saw a bunch of the players smiling when the band would play.  Of course any good college pep band will bring along its heckling skills, and one of the players on the visiting Cumberland Grads repeatedly heard the full force of Clarkson's dozen or so hecklers.  His last name was Tansey, so I will let you figure out what they called him.   About my only complaint was that line up sheets cost a dollar, but only listed the players name and number.  No stats, no height and weight, not even what position the player was.  The game day presentation was somewhat subdued, but there were a couple contests for fans.  A somewhat unique feature to the presenation is that all announcements are bi-lingual.  After a goal is scored the announcement on the scoring player and the assists is made in English, and then repeated in French.  I am sure this could make announcements after a brawl quite lengthy.  The game itself was entertaining with hard hitting, a fight, and a 4-0 win for the Colts.  I am glad I made a stop in Cornwall and would likely return if they ever get another Major Junior or AHL team here.  The place is definitely worthy of it. 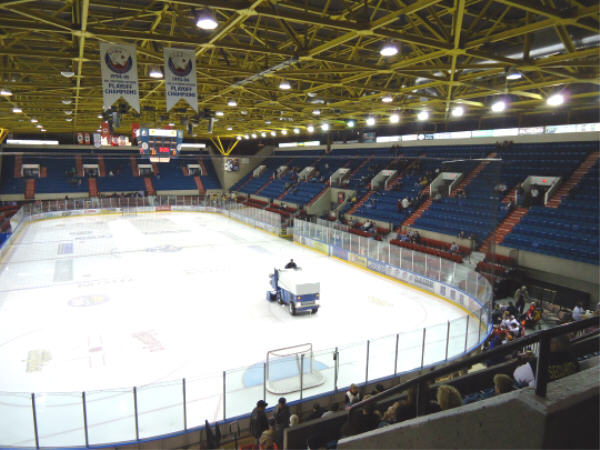 Other information about the Cornwall Colts is available at:  Colts Home

Other information about the Cornwall Civic and Ed Lumley Arena is available at:  Arena Home