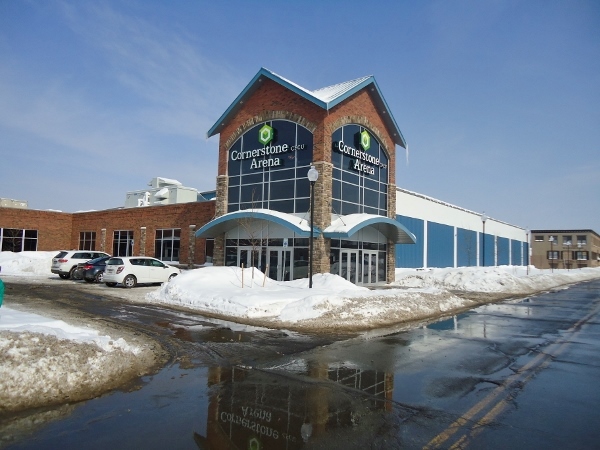 Tier 3 Junior hockey serves a couple of excellent purposes.  Firstly, it gives hardworking young players a place to showcase their talents in hopes of moving on to college, or even pro hockey.  Secondly this level of hockey gives an opportunity for fans, often in small towns, to see an entertaining brand of hockey in a place close to home.  Lockport is one such community benefiting from having a junior team in town.  This city of approximately 20,000 sits about 20 minutes from Buffalo and Niagara Falls, and is the home of the newly opened Cornerstone CFCU Arena.  Named for a local credit union, this venue serves mainly as a community arena, housing 2 ice pads, but also acts as more of a spectator oriented venue when the Express take the ice.  The arena sits a block off the main drag in downtown Lockport, and only yards from the famous Erie Canal.  The arena opened in late fall of 2015 and the Express actually had to play their first few games at alternate arenas in the Buffalo area and Batavia.  Built into a hill, the arena features a modern facade and main entrance which is highlighted by a sharp looking glass, brick, and stone entrance area.  A small parking lot sits on site just in front of the entrance, and there is a large town parking lot across the street as well.  The lobby and entryway area have the brick exterior, but the rest of the structure features blue and white metal siding giving the rest of the arena a "warehouse style" look.  Although you could think of Cornerstone Arena as mainly a community recreational rink the fancy and stylish entrance make it feel more like a big-time venue.  With the entrance being on the upper side of the building there is access to the upper carpeted hallway and a view overlooking the ice of the main arena as you enter.  The rest of the arena facilities are downstairs, including the concession stand, skate lobby, pro shop which is stocked with Express gear, and ice level access to both rinks.  They have done a commendable job in Lockport building a facility that is functional, but also has a sharp appearance from the outside, which makes the arena look more appealing than your average small town recreational rink.

Although the Express are a first year franchise in the NA3EHL, (a midseason change in league name from the Northern States Hockey reflects the league's alliance with the more well known NAHL) they seem to have a pretty good set up and have the pieces in place to offer an entertaining fan experience.  Tickets for this Sunday afternoon game against the Jersey Shore Wildcats were $5, and are purchased from a ticket table in the upper lobby. Fans enter behind the grandstand and head down a hallway which straddle between the 2 ice pads, and overlooks the ice and seating area.  The layout of the main arena find all of the seating on one side of the ice, and made up of 9 rows of metal bleachers.  The bleacher benches have individual plastic seat cushions affixed to the aluminum.  Behind the seats are a few glassed-in areas which are almost set up like luxury boxes and overlook the ice as well.  The entire grandstand is elevated and the front row of seats is at least 12 feat above the ice, making for a bit of an odd vantage point, but offering a decent view of the action, although play along the near boards is a bit obstructed.  In addition to the grandstand seating some folks choose to watch through the windows in the upper lobby, which sits above the end of the ice.  Seating capacity is listed at 630, but if needed additional fans can crowd in to the upper lobby or at ice level to stand and watch the action.   Everything is brightly lit inside Cornerstone Arena, with the bright lighting being magnified by the white walls and white ceiling beams.  A simple center ice scoreclock hangs from the high ceiling, and being a new building, the inside of the arena looks rather stark.  There are banners of the other teams in the NA3EHL which sit on the far side of the ice above the team benches.  The whole inside of the arena has a rather plain and industrial look, but also has the spotless look of a facility that is only a few months old.

The gameday experience at this Express game was very laid back, yet professional enough to provide entertainment in addition to the game itself.  The PA system is loud and the PA announcer does a good job getting the fans pumped.  There is a chuck-a-puck contest at intermission, and overall fans are on hand to have a good time.  Attendance was not announced, but we would guess there were about 200 fans on hand, not bad considering this was a Sunday afternoon game in the middle of one of the most brutal Winters in recent memory.  Despite the Express being a new team, and not having any history to build upon when it comes to the hockey product, there does seem to be a bit of a buzz about the team.  Quite a few folks were wearing Express gear, and the fans seem happy that the team is in town. From the start of the game the Express had their hands full as Jersey Shore had only lost 1 game all year and have been dominant.  Despite Lockport also being one of the better teams in the league they were outmatched in this particular game, trailing early and losing 7-2.  There was a great fight in the middle of the game as the Express tried to get their team and fans fired up, but the outcome was not a good one for the Lockport fans.  The fans on hand were vocal, they just did not have much to cheer about.  In fact, with the outcome in little doubt quite a few fans headed for the exit early.  Overall the Express have a good thing to build on as the support for the team seems to be there as many weekend games have had excellent attendance.  The atmosphere of the game seemed to have a bit of an old time hockey feel to it, and the play in the league is extremely physical and chippy.  We also are glad when a new town gets a chance to host a team and Lockport, with its snowy weather and blue collar makeup, seems like the type of place that is supposed to host junior hockey.  Cornerstone CFCU Arena is a good venue to house the team, and is a great compromise between a big event venue and a community arena. We enjoyed not only the action in this game, but also the opportunity to check out this new arena on the banks of the Erie Canal. 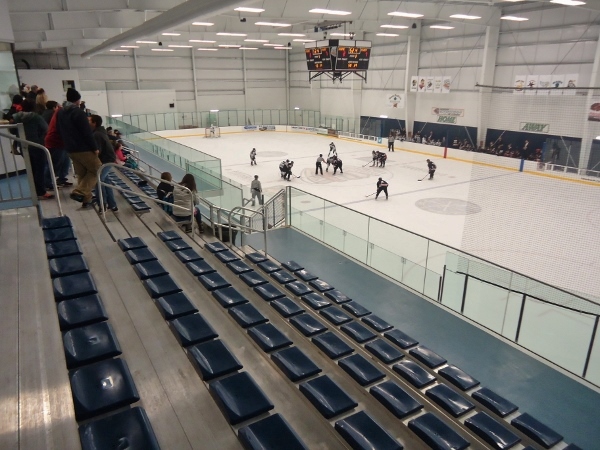 Other information about the Lockport Express can be found at:  Express Home

Other information about Cornerstone CFCU Arena can be found at:  Arena Home