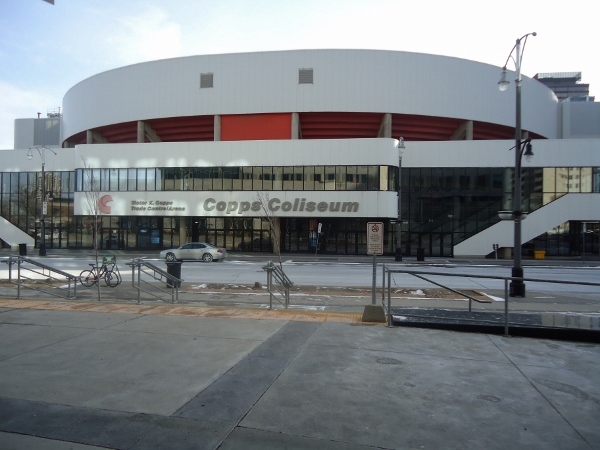 Who Let The Dogs Out?  After a Friday afternoon Junior A game in nearby Burlington we were off to Hamilton to catch some AHL action.   Copps coliseum sits on the West side of downtown Hamilton, and with "The Hammer" being a rather large city there is big city traffic to contend with.  The arena itself sits prominently on the main drag, and next to the city library.  This is a big time facility that was built in hopes of luring an NHL team to Hamilton.  Right around the time that Canadian rocker Bryan Adams had the hit "Summer of '69", in late 1985, the arena opened to the public.  Its concrete exterior, large profile, and "arena rock era" stylings clearly indicate this is a mid-80's era building.  The lobby and box office are and lower entrances are lined with glass, and as the arena rises you can see the contour of the upper level seating structure, which is colored an orange hue.  This place has the feel of a downtown NHL arena, in a blue collar, hardworking city setting, in the town best known for its steel mills.  It may not be in the best part of town as there is a homeless shelter across the street, but it didn't seem like an unsafe area in any way.  There is a large, well lit video type marquee sign on the corner announcing upcoming events for the arena, and the back side of the arena is actually built into a hill, so there is an upper concrete plaza type area near the library which has entrances that lead directly onto the mid-level concourse which runs around the arena.  This arena clearly has the capacity to host big-time events, with seats for 17,383, and was host to the 1986 World Juniors shortly after opening.  A couple of failed OHL teams occupied the arena from its opening until 1991, and the AHL took over in 1992 and has been here ever since.  A 17,000 seater is too big for either the OHL or the AHL, but it seems to be an adequate home for the Bulldogs at the present time.

After securing a $20 corner seat at the 80's era box office complete with a lot of ticket windows and posters announcing upcoming and past concerts which have occurred at the venue, you enter the arena up a flight of stairs and onto the concourse which runs atop the lower seating bowl.  The concourse is wide, and offers windows to overlook the street on the half of the building where the concourse is above the ground level.  It looks like not much has changed from an interior design standpoint since the mid 80's as the concourse bears a pale orange color on the concrete floor, and has the usual older style large-arena-type concession stands.  There are also banners of Bulldogs alumni who made it to the big time, and lots of photos from past events which have taken place here, at the arena in the heart of Hamilton, over the past 30 years or so.  The Bulldogs have a portable type store erected on the concourse called the Dawg House, and it was stocked fairly well with team items and merchandise.  The entrances to the lower seating bowl, as well as entrances to the suites which run atop the lower bowl, and stairs to the upper balcony all come off of the concourse hallway. Once in the seating bowl itself you see essentially an NHL arena with the upper level of balcony seats curtained off.  The lower seats are all blue, and appear to have been replaced at one point.  Gaps in the curtain show glimpses of the multi-colored upper level seats which are original to the building.  There is an older, but sufficient, video board, and the rake of the seats is that typical of a larger arena, with not much angle to the rows of seats.  Still with a crowd of 4297 on hand, even with the upper level blocked off there were plenty of places to sit and get a good view.  The Bulldogs draw OK for the AHL level, with a couple of 10,000 crowds earlier in the year due to the NHL lockout, it's just that the building is so big it feels rather empty even with a crowd of over 4,000.  The Bulldogs have built a good group of hardcore fans who definitely show some support for their team however.

The game day experience at Copps Coliseum for a Bulldogs game is actually better than I anticipated with such a large arena.  There are a lot of promotions and between period activities, which is not always a good thing, but it does not seem to be overkill with the ads, and hockey, as in most of Canada, seems to be the main attraction.  The fans are loud and know when to get excited, even though this game against Grand Rapids, the Red Wings affiliate I nickname "the mini-Euros", was a futile effort as the Dogs came up short by a 5-1 score.  Still, the presentation has a big event feel to it.  There is a broadcast analyst desk overlooking the ice on one corner of the concourse, and with the Bulldogs being Montreal's AHL affiliate there is quite a bit of French language media coverage of the team as well.  The pressbox is on the side of the ice and hung from the rafters, thus being very high and away from the action, but very likely providing a great vantage point of the action.  There are even glimpses of old fashioned hockey practices as there is a roaming guy with a trumpet who tries to pump up the crowd during stoppages by playing a tune to get the fans to cheer along.  I was impressed by the fans in Hamilton, as well as the fun-factor of the game itself.   A full scale line brawl with less than a minute left sent the fans home entertained despite the 5-1 loss.  A stop in The Hammer is worth a trip to see the Bulldogs, and if this place is ever near capacity the atmosphere, and combination of NHL (or at least 1980's NHL) caliber arena, and rabid blue collar Canadian hockey fans, is a recipe for fun which seems to work well in this big city on the shore of Lake Ontario.  For the NHL to ever come to Hamilton would mean a new building, but for now they provide a decent experience for hockey fans working with what they have. 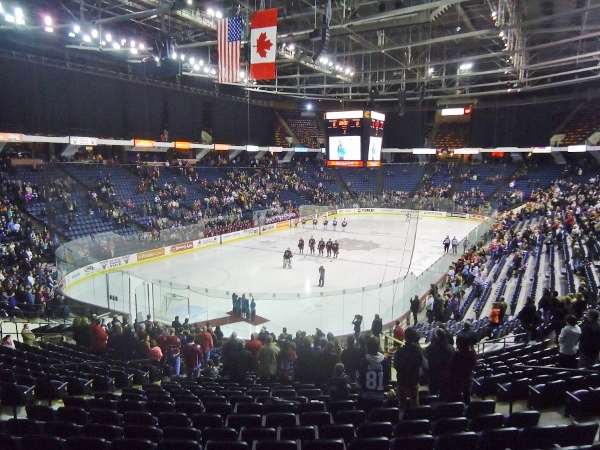 Other information about the Hamilton Bulldogs is available at:  Bulldogs Home

Other information about Copps Coliseum is available at:  Arena Home