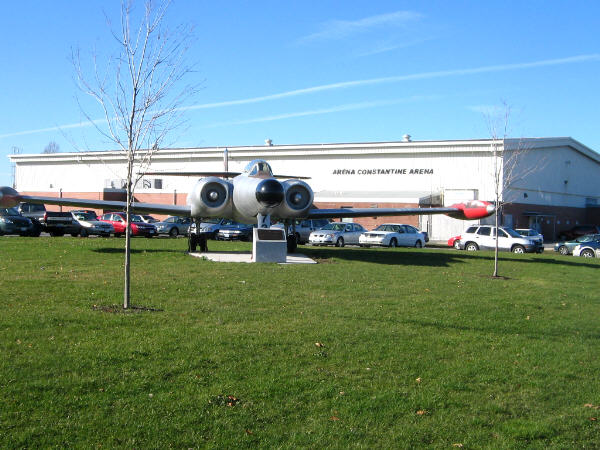 With my hometown Elmira Jackals on the road for the weekend I decided to head to Ontario to catch some OHL action.   As I was in the Kingston area for a couple days I took advantage of an afternoon game at the Royal Military College's Constantine Arena, where the Paladins took on the Ottawa University GeeGees.  Located steps from Fort Henry, and where the St Lawrence meets Lake Ontario the rink sits on the edge of the RMC campus and on Canadian Forces Base property.  The Paladins compete in the Canadian Interuniversity Sport system, which is similar to the NCAA in the states.  I was excited as this was the equivalent of seeing the Army hockey team play at West Point, only a little farther north.  As you can see above there is a fighter jet at the entrance to the arena, signifying that you are clearly on military property.  There is plenty of parking all around the arena, although the lot seemed quite crowded on this Saturday afternoon.  I ended up in the gravel lot behind the rink.

Constantine arena is clearly a no frills facility, as upon entering through a small foyer you are looking right at the glass which surrounds the rink.  They had a table set up selling tickets, and at $5 they were a bargain.  To your right as you enter is the pro shop, which is a very small room which you have to tell the attendant what you want through a small window.  I will give props to the pro shop worker as between driving the zamboni, and sharpening a pair of skates for a young kid and his Dad he gave me a free RMC puck.  You see I collect pucks for every arena I attend, and he advised they were out of pucks, but looked on a shelf behind him and did see one worn out looking RMC puck, I asked if he would sell that one.  He advised he would not as they are getting a new shipment in in a couple weeks.  He then asked if I was local, and I explained I was from Pennsylvania and on a trip to see some more hockey rinks.  He then flipped me the puck and when I reached for my wallet he said not to worry about it.  Gotta love military hospitality.  There was no formal student section, although there seemed to be quite  few cadets there.  Only a couple were in uniform though.

The rest of the facility is not much to behold, but I enjoyed my stay.  The wash rooms are to the right if you walk down the narrow corridor next to the glass, and this is the same area the locker rooms are in.  I did not see any food or drink concessions, although I may be wrong as some folks were carrying coffee, which I am not sure if they got at the rink or brought with them.  The seating is on plastic bleachers, all of which sit up on a balcony which is very close to the ice. The first stairway to the balcony is just after walking in the main entrance to the building.  The seating is only on one side, and across from both benches and penalty boxes.  All seats offer an awesome view, and although the sign near the door said the capacity was 1500, I would guess seating at about 500.  They do a decent job with music during the warmup and stoppages, and there is a small press box which is enclosed and takes up the last couple rows near center ice.  There are also heaters hanging above the seating to keep patrons warm.  One annoying factor is that there is netting on the entire side of the rink where the seating is, and as all seats are so close to the ice it kind of hurts yours eyes after peering through it for a while.  The score board is on the end wall where the main entrance is, meaning that the goalie guarding that net has no idea how much time is left in the game or on a penalty.

The game itself was not much to write home about as the home team got smoked 6-0, including 4 first period goals against.  I will comment on the level of play which I saw.  I was impressed with CIS hockey overall.  The players seemed to play with high intensity, and there are many OHL grads in the league.  The style of play is also intense with a lot of hard hitting and physical play.  I also love the fact that they don't wear the full cage like in US college hockey.  Things are so much better with the visor.  There was even a gloves-off altercation as the final buzzer sounded, although a check of the box score found only roughings called, it looked like a fight to me- something you would not see in US college hockey .  The game also seemed very fast paced with good skating and puck movement.  Overall a fun afternoon at a basic barn where hockey is the attraction, and not fan promotions or a luxurious setting.

Other information about RMC hockey is available at :  RMC hockey home

Other information about Constantine Arena is available at:  Arena Home