Our second ever LNAH game found us heading about 50 miles Northeast of Montreal to the banks of the St. Lawrence to see the Sorel-Tracy Mission play Sherbrooke.  Anticipation was high after experience a completely electric atmosphere the night before in St. Jean.  The previous day's rain storm and dropping temperatures found everything in the town of Sorel covered in a coating of ice, but that would not stop us from taking in a game here.  Colisee Cardin sits in an area of Sorel-Tracy that is between a residential and commercial part of town.  The arena is actually next door to a McDonalds.  Sorel is a blue collar town, and this game had all of the atmosphere you would picture with small town minor league hockey.  Colisee Cardin looks modern, but was actually built in 1954.  Its brick exterior and arching roof give some reminder that this is an old building, but the metal trim and modern facade of the arena make this place look much newer than it is.  The modern look was added as a result of an extensive renovation which was finished in 2000.  After purchasing my ticket inside the small lobby and box office area it was soon time for warmups.

Once inside I was able to chat with a couple of English speaking folks I met the previous night in St. Jean, one of whom is an agent for some well known players, the other worked as a videographer selling fight DVDs at the end of the season.  Once inside Colisee Cardin you see an impressive arena with red plastic seats, and an open feel to it.  The seats are fairly steep and there is a narrow upper concourse going around the top of the seating area.  The high arching roof makes the arena feel large, and there are quite a few quirks evident within the building.  On the end furthest from the entrance there is is an additional level of seating which is simply made up of white concrete slabs, similar to what you would see in Europe at soccer stadiums.  Tickets for this section were a little less expensive than everywhere else in the arena.  There is an additional concourse hallway underneath the seating and that is where most of the concession area is, although there was a bar/lounge type area up top in one corner.  The sight lines are not bad, but the roof support columns do obstruct the view a little if you are either standing along the concourse or in the top row.  Overall capacity for Colisee Cardin is listed at 3037 including stasndees.  The front row of seats is set back about 10 feet from the boards and glass, making the action seem a little distant.  There is low glass like any good old time arena should have, and you can clearly see how this arena hosted a QMJHL team for a few seasons up until the early 1980's.  Perhaps the most unique feature of Colisee Cardin is the layout of the player benches.  The benches actually sit in the middle of the aisle people use to get to and from their seats. It is simply a single bench in the hallway separated from the concourse by only a rope and a security guard on the home side.  The visiting side is across the ice, and has a similar configuration, although with a little better security set up.

The fan experience at Colisee Cardin is very good.  The crowd is loud and into the game  As with most LNAH games warmups are a big part of the show, with each team's tough guys congregating at the red line and sharing words.  The techno music music and hostile atmosphere during warmups builds the anticipation for the game to follow.   Air horns often drown out any other noise inside the building.  Atendance was listed at 1484 for this game, although the arena felt a little more full than that.  The LNAH's rough and tumble style of play keeps everyone entertained, and there were 4 fights on the night.   Local hero and YouTube sensation Jon Mirasty has been packing in the crowds in Sorel with his fearless style, and it was a pleasure to see him play, although he got ejected in the first period after being involved in a line brawl.  Catching a game in Sorel as an American seems almost surreal as it is about as far away, both distance wise and culturally, from U.S. minor pro hockey as you can imagine.  Being able to experience the type of atmosphere you only read about on the internet is truly a privilege .  Sherbrooke took a 6-3 win, but it didn't matter to me.  This was old time, rock-em sock-em hockey played in an setting which, although still common in places like Quebec, is something that most hockey fans do not get to enjoy. 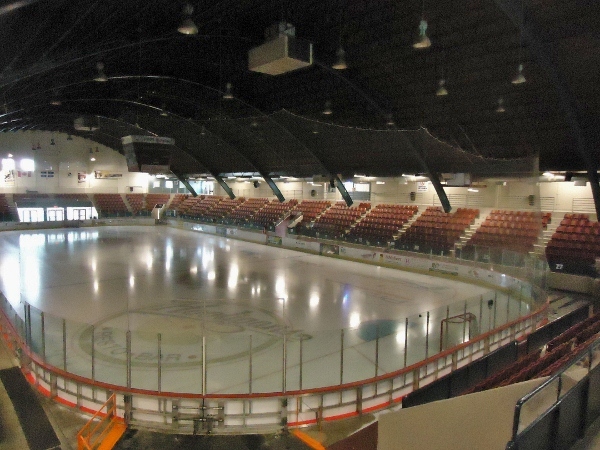 Other information about the Sorel-Tracy Mission is available at:  Team Info Page

Other information about Colisee Cardin is available at:  Arena Info Page

**Note -  Although this review describes our experience at Colisee Cardin at the game we attended in December of 2006 the photos on this page and in the photo gallery were taken on September 24, 2010 on a return trip to Sorel-Tracy so we could capture photos of the arena in order to share this review.