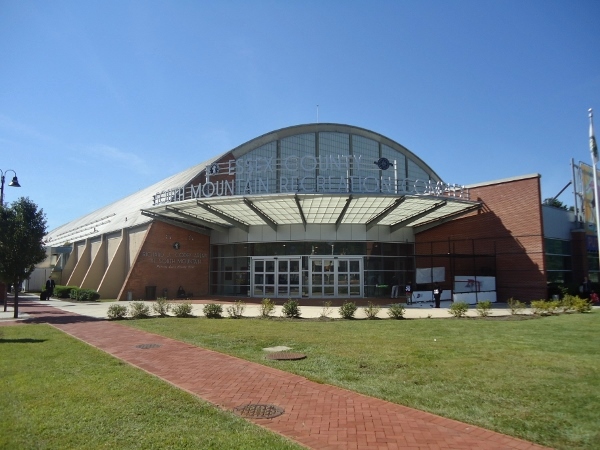 We kicked off our 2013-2014 season at an unlikely location.  After all, where would you go if you wanted to see some preseason games featuring teams from Ohio, Michigan, Iowa, and South Dakota?  We doubt your answer would be New Jersey, but that is where we ended up, as the USHL is trying to introduce their product to the East Coast market.  We are glad they wanted to give that a try.  We were equally glad we had a chance to see a game at Richard J. Codey Arena, as this is a place we missed out on when the Jersey Rockhoppers of the EPHL played here for a single season a few years ago.  Codey Arena has not had a main tenant to speak of since then.  This arena was also the practice facility of the New Jersey Devils, but since the Prudential Center opened, that is no longer the case.  There are few places we like going less than New Jersey, but there are few things we like more than a chance to see a rare game at a classic arena, so off to the New York metro area we went.  Codey Arena is located on a main thoroughfare, and is part of a larger complex known as the South Mountain Recreation Complex, which also houses walking trails, a lake, and even a zoo.  There is a parking garage on site, which was free for this event, and with the warm weather, zoo goers arriving in the afternoon were forced to park elsewhere and take buses to the zoo, as the crowd on hand for both facilities exceeded the parking capacity.

Codey Arena is a cinder block and brick structure, which opened in 1958.  Its key focal point from the exterior is the high, arching, hangar-style roof.  The arena entrance is actually on the corner of the building, and the entrance is marked by mid-century modern styled signage.  The raised individual letters give the building a unique look.  Inside the main entrance is a small lobby and a pair of ticket windows. The USHL brought banners and large mural-type signs to display throughout the arena.  Despite being over 50 years old everything seemed nicely kept.  Past the box office lobby is a larger lobby and concourse of sorts featuring the concession area, a pro shop, meeting rooms, and tables and chairs.  The styling, although much of the lobby is an addition to the original building, carries on with the mid-century modern theme.  Tickets for the USHL preseason action were $8.50 per game, and the second ice pad, which was added in 1983, was also kept busy all weekend with Tier 3 junior, midget, and bantam level hockey, as well as a USHL game scheduled for the morning after we were here.  The building was very busy and buzzing with activity, although it was mostly from young players, college scouts, and parents of the players.  There were not a whole lot of folks there just to spectate, but junior hockey is still not that highly thought of in the Northeastern U.S.  Still, it was great to enjoy some highly skilled hockey in a new location this early in the season.

The entrance to the arena itself is off of the concourse lobby, and inside is a nicely laid out arena which is a good reflection of buildings of the 1950's.  The high arching ceiling really makes the arena seem big, although the 2500 seats which circle the ice still indicate that this is a small arena.  The seats are plastic and colored green, yellow, and blue.  The seats rise 9 rows high throughout most of the arena, with the corner areas extending a bit higher at 10 rows high.  The top row of seats is just under the end of the curved wooden roof trusses.  The wooden roof support structure really harkens back to many older style arenas.  The walls themselves are cinder block and painted a pale yellow.  Another feature of Codey Arena which makes it unique is the opaque glass wall above the seating area on one end, which essentially serves as a skylight and lets in lots of natural light.  Center ice is adorned with the Essex County crest, and the scoreboards are on each end wall behind the nets.  There is no seating on the direct ends of the arena, as the end with the glass wall serves as the entrance area from the lobby, and the other end serves as the zamboni entrance.  The seats are a bit far from the ice as the front row is set back about 12 feet from the boards, and the pitch of the seats is not very steep, but it is fun to get the opportunity to see a game in such a period representative setting.

The atmosphere at the USHL Atlantic Challenge was everything you would expect from a preseason tournament where the nearest team is from a city 6 hours away.  In this case the neutral site atmosphere equalled essentially no atmosphere at all, as there were hardly any cheers or reaction from the crowd.  We enjoyed the matchup which pitted the Youngstown Phantoms and the Sioux Falls Stampede.  The game was a back and forth contest, which featured players hustling hard to try to make the team.  It also had a couple of very good fights thrown in to add to the entertainment factor of the game.  The presentation was good, although by the time the afternoon was over after our second game of the day featuring Muskegon vs Sioux City we had heard the same songs repeated on the PA at least a half dozen times.  The PA was loud and clear however.  There were no contests or promotions at intermission, and that was fine as the hockey itself took center stage all weekend.  We were highly impressed with the quality of play in the league, and certainly think the value of the $8.50 ticket was a bargain.  The crowds of paying fans were small, with announced crowds of only 300 per game.  Getting the chance to see teams that would normally require a 10-12 hour road trip or more, in a setting one would never imagine them being them in was a great experience.  We are not sure if the USHL will make another return to New Jersey, but we are very glad that hockey made a return to Codey Arena. Other information about the USHL Atlantic Challenge can be found at:  Event Home

Other information about Richard J. Codey Arena at South Mountain can be found at:  Arena Home