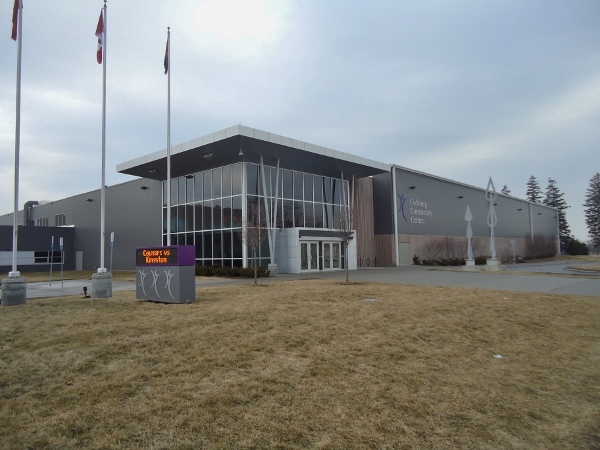 The Cobourg Cougars have been a mainstay on the hockey scene on the North shore of Lake Ontario for 50 years.  The club started as a Junior B and Junior C team, but has been at the Junior A level since the mid- 1990's, and moved into the newly built Cobourg Community Centre in 2011.  The Community Centre sits in a residential neighborhood near the town ballfields, and has a modern industrial look.  The large complex has tan fluted concrete on the lower level of the exterior, and dark gray metal siding above that.  A glass facade near the main entrance of the arena opens up to the lobby, and there is some parking in the back of the building and on the sides.  The CCC is certainly a sharp looking venue, and has also been chosen to host the RBC Cup in 2017.  Unlike most towns, Monday night is hockey night in Cobourg, as the Cougars have a home game nearly every Monday throughout the season.  This matchup was a playoff contest against the Kingston Voyageurs, and drew a typical Monday night crowd from our understanding.  If entering the building through the main entryway you will come through a very nice modern lobby complete with some nice art work, couches and benches to sit and relax, and a high ceiling with ornamental panels hanging below.  The main arena, known as "The Bowl", sits in the rear of the building, so most folks enter through the rear entrance on game day, bypassing the smaller second ice pad and lobby at the front of the building.  A small snack bar and information desk also sits in the lower level.  A Cougars ticket table is set up near the stairs that lead to the main arena, and a ticket for this playoff game was $14.  The layout of the facility at the Cobourg Community Centre combines community use facilities and the ice pads nicely with what can also be thought of as a mid-sized event venue.  The modern look still comes across as state of the art, even though the building opened 5 years ago.  We can see why this venue was chosen to host the Canadian Junior A Championship for next season.  Fans in Cobourg have a great facility to call their own.

Entry into the main arena at the Cobourg Community Centre is via a stairway that leads to the top of the seating bowl and the upper concourse.  The arena has an open layout, and 9 rows of gray plastic seats circle the entire ice surface.  There is a large press box at center ice on one side, and the concourse doubles as a running track as well.  The ceiling is rather low, and features open ductwork and white metal rafters.  There is also a rather low-profile center scoreclock which is complete with something you will rarely find at the Junior A level - a four sided video board.  The entire place still looks spotlessly new, although it does have a rather stark and sterile feel to it.  The walls are bare, and there is not a lot of things which make the arena feel homey or welcoming.  There is large number 50 at center ice as well as smaller Cougars logos which commemorate the 50th campaign for the Cougars.  A merchandise table can be found in the corner of the concourse selling a decent selection of Cougars gear, and there is a food concession stand in another corner which serves a rather limited menu.  With a capacity of 2250 plus standees the arena is plenty big enough for the normal Monday night crowds, and is a bit on the large size capacity wise for the league, although the Cougars do draw well in comparison to other teams in the OJHL.  Thankfully there is no netting over the center ice seats, and sight lines are very good here.  Overall, the CCC comes across as a sparkling little building, which is almost too big, too new, and too nice for hockey at this level.  It does make the game feel a bit more "big time" as the arena has amenities usually found at larger venues such as you may find at the OHL level.

The gameday presentation and atmosphere at a Cobourg Cougars game is professional yet focused on the game.  The video board is used nicely for replays, and the feel of the building is that of a professional one.  When the Cougars score a "roar" sound effect is played, and the crowd of 600 spread out in the seating area, so there was not a crowded feeling.  Fans here are supportive and look forward to the tradition of Monday night hockey, but like in many parts of Ontario they are not overly boisterous or rowdy.  There were a lot of older folks on hand to enjoy the action as we sense that is a longstanding Monday night tradition in Cobourg.  Kingston took a 6-3 win though, so there was not an abundance of things for Cougars fans to get excited about.  The on ice action is the focus here, and the knowledgeable crowd is not here for gimmicks, they just want to see a good game.  Intermission entertainment is limited to a chuck-a-puck contest, and it was announced that the scheduled fan shoot out contest was cancelled.  The Cougars have a  built up a solid following over ther years, there is just not a lot of evidence of that in the arena itself as it seems too new to have built up much of a sense of history and tradition. You wont' find many banners or memorabilia here paying tributes to past teams.  As this was the playoffs Kingston brought a decent contingent of fans who made the hour plus drive down to support their team as well.  Despite the spotlessness and professionalism of the building there are small hints at throwbacks to the old days of junior hockey.  The team benches are on opposite sides here, something you don't see often from a new building and a feature we always enjoy.  The rake of the seats is steep enough to give the fans a good  vantage point to see the action, and with a full house we imagine this place could get really loud with a rather low ceiling.  The Cobourg Community Centre is modern, comfortable, and provides fans with amenities that people expect at higher levels of hockey than Junior A.  Despite the new and sterile feeling that you get with a modern arena this is a very good place to watch hockey, and should serve the community well for decades to come.  Junior hockey was built upon the support of smaller and mid-sized communities across Canada, and with buildings like this popping up across the country the junior hockey fan experience will continue to change into the future.

Other information about the Cobourg Cougars can be found at:  Cougars Home

More photos of Cobourg Community Centre can be found  Here