It is not every day that you have a chance to walk back in time to experience things the way they were in the past.  New Year's Eve was more of a chance to look back than to look forward at the upcoming year for us.  Clinton Arena was home of the Clinton Comets of the old Eastern Hockey League from its opening in 1954 until 1973.  This small town arena hosted some amazing pro hockey action during that time, yet it is likely that there is an entire generation of folks in the area who have no idea that this nondescript cinder block building had such a place in hockey history.  In fact in the almost 40 years since the Comets moved to Utica, Clinton Arena has hosted little more that high school and youth hockey.  We stopped here in 2010 when we were attending a Hamilton College game at the even older Sage Rink, which sits on campus, to take photos from a historical perspective, figuring we would never be able to experience a game here.  Later research found that Clinton Arena had been brought back into action for a once a year NCAA Division 3 game back in 2006, and the event has been held nearly every year since.  You do get a chance to go back in time afterall.

Clinton Arena sits very close to the street and is a weathered looking cinder block building, with a squared-off lobby attached to the arena itself, which has a barn style silhouette.  Above the entrance doors is a large art-deco style block letter sign which simply says "Arena".  There is a small parking lot beside the arena, and if you look at the building from a distance you can see the barn-like eaves painted red.  The arena is jammed into its surroundings as there is a house next door which can't be more than 20 feet from the arena walls.  You can picture in you mind minor league hockey from the 1960's and 70's, and in fact Clinton Arena was a filming location for the movie "Slap Shot".  This place is about as simple as it gets from the outside, and its weathered exterior really isn't that much to look at.  The arena does warrant recognition on the national register of historic places, hopefully meaning that it will stand for many years to come.

Inside the front entrance doors you can tell not much has changed since the 1950's here.  There are 2 box office windows and a small lobby area, with a narrow wooden stairway leading to the upper lobby.  For today's game between Hamilton College and Curry College the tickets were being sold at a table at the top of the stairs.  A ticket for the game was only $5 and included a free program.  There were raffles and other fundraising items on a few tables in the lobby to benefit the local youth hockey organization.  The upper lobby houses the food concession which has a simple counter, as well as trophy cases and displays of the hockey history which took place within these walls years ago. There is a great display of Clinton Comets memorabilia along an entire wall, and newspaper clippings from the early 1950's detailing how the original Clinton Arena, which was built in 1948 on this site but burned down in 1953, was rebuilt in 1954 in its current form.  The items on the wall of the lobby are more like a museum.  The entire building feels like a museum in fact and there was going to be a game here in this timeless place as well.  Once inside the arena itself you immediately notice how cold it is inside.  The simple arena layout finds 6 rows of seats circling the entire ice surface.  The seats are pale blue and are plastic, indicating that they are not the original seats but have likely been replaced at some time in the past.  The arching roof trusses are covered by a drop ceiling for insulation purposes, but aside from the seats and the ceiling little has changed.  There is a concourse aisle which runs all along the top of the seating area, except for the end where the lobby is, as you can get behind the seats on that end by going through the lobby.  The concourse walls are beige painted cinder block, with maroon stripes at the bottom.  The concourse actually features windows which look out to the outside parking lot on one side, and directly at the neighbor's house on the other.  The glass is very low, and  there is a single scoreboard on the end wall opposite the lobby end.  The major drawback is that netting has been installed in front of the entire seating area, meaning unless you sit down low you are looking through the dreaded netting the entire game.

The game experience was laid back, but seeing a game at this old arena which we had written off the chance to ever experience was refreshing.  The small ice surface measures 190 feet long and only 80 feet wide, making for a great place to host a physical style team.  The sight lines are good, and even standing on the concourse along the rail you feel like you are on top of the action.  Seating capacity is listed as 1800, but with standing and folks looking in from the lobby they could easily fit another 4-500 people here.   At intermission there was peewee hockey, and despite the subdued crowd of only 350 the simple fact that there was big-time hockey being played within these walls again was enough to make for an enjoyable experience.  Perhaps if the game were not played during school break a lot more of the Hamilton College faithful would have made the couple mile trek to Clinton Arena.  Just seeing some of the old fashioned details of the arena made checking out the rink during intermission fun.  The goal lights appear to be original from the 1950's.  The old style press box which hangs above the concourse is not unique, but seems to be the perfect compliment for an arena of this era.  We had a blast at this game, and the local fans were happy that the Continentals took a 2-0 win.  Looking through the netting and freezing during the game are small prices to pay for a chance to  watch a game at this historic arena.  No, it was not a packed house watching the Comets play a rough and tumble game without helmets, but it was a chance to experience a small piece of history.  I would encourage all fans of old fashioned arenas to keep your eyes on the Division 3 schedule and take in a game here the one day of the year that you have the chance. 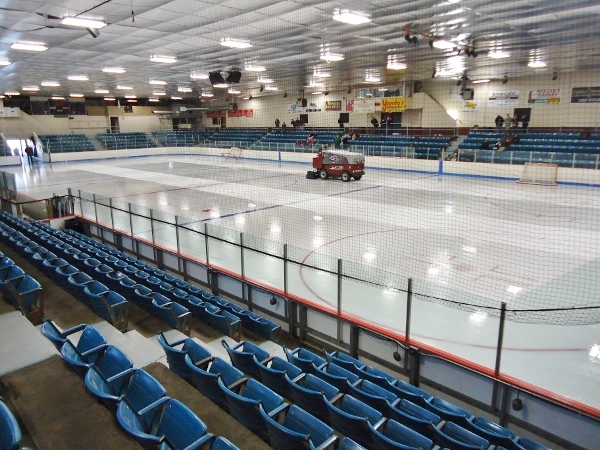 A Box Score of the game is available  Here

Other information about Clinton Arena is available at:  Arena Home

More photos of Clinton Arena can be found  Here