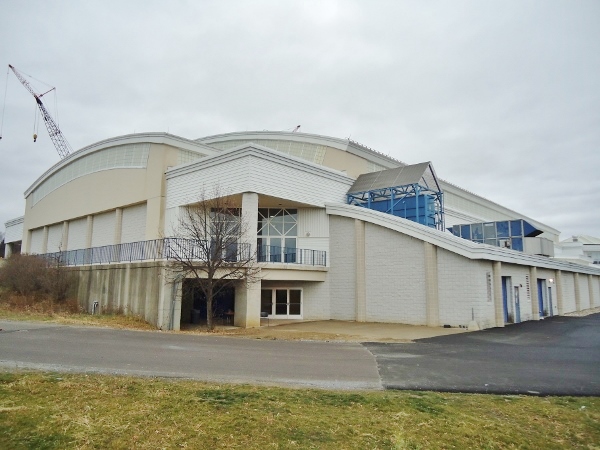 Middlebury College is tucked away in the serene setting of western Vermont.  A town with nary a traffic light seems like an unlikely location for a national hockey powerhouse, but the Panthers are arguably the most successful NCAA Division 3 hockey program in history, having earned 8 NCAA titles since 1995.  Chip Kenyon '85 Arena sits on the edge of campus, nestled in with other athletic facilities, and has been the home of Panthers hockey since 1999.  The arena is named after Kenyon, a Middlebury grad who donated most of the money for the arena project.  Within view of the nearby mountains, the athletic facilities were bustling on this late Fall Sunday afternoon.  In fact, parking was hard to come by as there were playoff games for both soccer and field hockey going on at the same time, as well as this early season hockey matchup against Colby College.  I even took a little while to watch the last 20 minutes of the NCAA field hockey tournament action as it was held only steps away from Kenyon Arena.  The arena itself is a modern looking tan and gray concrete structure, with blue accents on the building and a high metal arching roof.  The area around the arena was under construction as a new indoor track and fieldhouse is being added to the already plentiful athletic facilities on the Middlebury campus. Directly next to the arena is a pit which is excavated out to build the new track.   In fact part of the new construction is already complete, as a freshly paved parking lot sits next to the arena and a newly built squash center sits connected to the arena.  This modern dark brick,  glass, and pale yellow concrete structure also serves as a new entryway to the arena.  The arena can also accessed through a maze of hallways which connect the older basketball arena and fitness center to the hockey arena.  When passing through the hallway from the new entrance you also pass the natatorium.  How nice are the athletic facilities at Middlebury?  Well, the natatorium (as in the swimming pool) has a higher seating capacity than many D3 hockey arenas in the country.  Seemingly no expense is spared on Panther athletics, and we are sure that once the construction next to the arena is done, and rest of the facility cleaned up, that is will be a true showpiece.

The lobby outside the arena features a sculpture of a Panther on a rock, and has a model of what the completed facilities will look like once the fieldhouse project is finished.  The lobby was also under a renovation with painting still to be complete.  One cannot overlook the trophy case, or in this case trophy cases, which house the championship hardware for the school's 34 national titles in various sports since 1995.  To say Middlebury has a tradition of success is an understatement.  The entry to the arena from the lobby is through a high glass wall, with the arena's name listed above the glass doors.  We were surprised that there was no one taking admission money, and we walked in an hour before the game to check things out.  Even later on we did not see any place to buy tickets, although the school websites lists tickets as costing $5 for adults and $3 for students, which in itself would be a bargain.  The arena features a wide upper concourse which goes all the way around the arena, although it tucks underneath the high grandstand which is on the end of the arena near the entrance.  There are 7 rows of seats in the lower bowl, which are made up of mostly blue plastic seats, although the far end of the arena has plastic benches in the end section.  The upper end grandstand has an additional 11 rows of blue plastic seats, making for a total of 19 rows on that end.  The arena is bright, spotless, and amazingly professional for a school at the Division 3 level.  Kenyon Arena is clearly built on a grander scale than some D1 arenas.  Capacity is listed at 2600, and like our stop the evening before at the University of Vermont, the ice is oversized, at 200' x 95'.  Must be something about the tape measures in the state of Vermont that leads to wider arenas.  There are food concessions on the concourse under the end grandstand, and a small merchandise cart sells Panthers gear in one corner of the arena. A simple center ice scoreboard hangs from the rafters, and a pressbox runs above the concourse on one side of the ice.  Team benches are on opposite sides of the ice.  Overall Kenyon arena has a "big time feel" to it, with its high ceilings and open duct work, modern seating all the way around, and a scale that makes it feel much bigger than a 2600 seater.  A nice touch is the opaque glass panels at the tops of the walls that let in a little light.

The atmosphere at Kenyon was not exactly what we expected.  With such a great arena and history of success we pictured an environment of rowdy fans, a rabid student section and a polished, showy production of the game presentation.  We were greeted with none of those, as the fans were about as laid back as you could get.  A fair-sized crowd of 850 was on hand, and largely made up of older folks from the town.  There were some students in attendance, but no organized student section.  We were also hoping for a pep band, but there was no Panther band to be found.  Perhaps the kids were away on break, but the rest of campus appeared to be in session.  The presentation at a Middlebury game is one that embodies tradition.  There is no music played over the PA during stoppages, something we hardly ever see anymore, at any level.  There are no intermission activities, save the zamboni resurfacing the ice.  There are no giveaways, and no contests.  You basically show up, watch the game, wait for the game to start (or socialize, which seemed to be the norm) at intermission, and then watch the rest of the game.  Although there haven't been any championships brought back to Kenyon in very recent years the locals seem to have an expectation of success, and seem accustomed to the fact that the Panthers will win, and win handily.  The team did not disappoint on this day as they outshot Colby 40-11 and won 7-1.  The fans cheer success, and seem very knowledgeable, they just seem to expect that their boys will clobber the opponent.  Still, despite the low key presentation, it is fun to watch a hockey game in such a modern, high quality arena, yet not be bombarded by much of the current day norm of loud music, contests, and other ancillaries which often add to the game experience, but can detract if overdone. Rather than watch a chuck-a-puck contest intermission gives a great opportunity to walk around Kenyon Arena, check out the trophies, count the championship banners and displays recognizing the All Americans who have played here, and just take in the atmosphere of success.  Afterall you are in the "house of the champs" even if the Panthers recent record may not reflect that.  Catching a game at a place with so much on-ice tradition, in such a comfortable, modern setting is a pleasure.  We still call dibs on the pep band though as that would have been a plus.  For us a late afternoon game at Chip Kenyon '85 Arena proved that Middlebury College athletics is not about being flashy, or adapting to modern trends, it is simply about success. Other information about Middlebury Panthers Hockey can be found at:  Middlebury Hockey Home

Other information about Chip Kenyon '85 Arena can be found at:  Kenyon Arena Home

More photos of Chip Kenyon '85 Arena can be found  Here