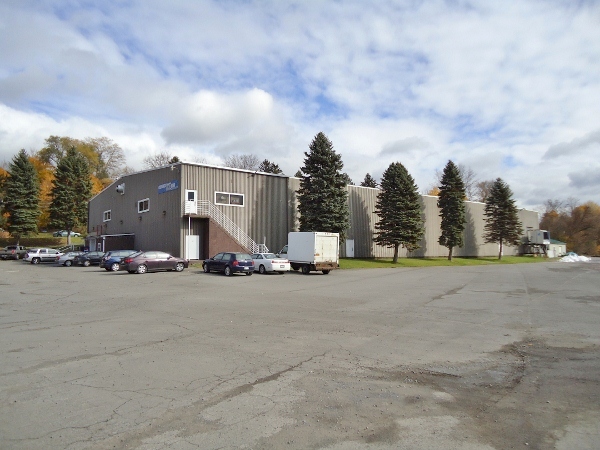 The history of pro hockey has certainly seen its share of unlikely and out of the way arenas.  Few current arenas fit that billing more than the Chenango Ice Rink.  With the Single A level Federal Hockey League kicking off its existence this year Binghamton would see a second team in town- the Barons.  Already home to the AHL Senators the upstart team would be a tough sell.  Readers of this site know that my opinion is that bigger is not always better however and this barn is a fun, throwback type of setting to watch hockey.  The arena sits on the East side of Binghamton in an industrial area.  From the outside it looks like a gray-colored warehouse or literally a barn.  Only the small blue sign at the end of the building indicates its use as an arena.  There is a small parking lot on site but it is sufficient for the crowds and size of the arena.  Viewing the old building from the parking lot one's response might be "there is no way they play pro hockey here", but indeed they do, and it is a fun experience.  Fans enter from the small door on he end of the rink.  Above the entryway is an old goal and the place is clearly in need of a general sprucing up.

Inside there is a table selling tickets.  Ten dollars scores a general admission ticket to the game, a good price for pro hockey.  There is the arena pro shop to the right of the entrance and they were selling Barons merchandise in there.  To get to the seating area you go up a narrow, steep set of stairs to the upper concourse, or go through the glass doors at the end of the rink and climb the bleacher steps there.  The main seating area runs the full length of one side of the ice, and wraps around the far end stopping just shy of the zamboni entrance, which is behind the far goal.  The red wooden bench seating features padded vinyl cushions. Eight rows of seats and a standing area atop the concourse make up the bulk of the viewing areas.  Even from the top row you feel as though you can reach out and touch the players, and the low ceiling magnifies the fact that you are in a small arena.  A single scoreboard sits on the end wall behind the far goal, and is not visible to the goalie playing at that end.  In fact the seats on the end also have no view whatsoever of the scoreboard.  To top off the throwback feeling the rest of the building is covered in 1970's style wood paneling.  The benches are on the far side away from the grandstand, and the wood paneling covers the wall behind the benches.  The capacity which I found listed for the rink is 1200, so it is clearly an intimate place.

In addition to the main seating area there is seating on the corner and end of the rinks.  There is a glassed-in terrace which has plastic chairs in the corner.  This area is heated, so folks who don't want to get cold can sit there.  There is also table seating on the end in front of the concession stand.  The concession stand has community rink pricing, rather than big time arena ripoff fees for the food.  There is also the Face Off Bar and Grill located in the corner which also hangs over the ice, and many folks decided to have a few beers and food in there while watching the game.  Sure it is not your traditional, modern arena luxury box set up, but seemed popular nonetheless.  The views from the bar and terrace are somewhat obstructed when trying to see the near goal, but offer a neat perspective.  There are not nearly enough restrooms for a large crowd, but that is a minor inconvenience.  A second snack bar sits atop the concourse at the far end, and the sight lines from the main seating area are very good.  You can almost picture this arena being in a movie like Slapshot with that type of old-school atmosphere.

This being the first ever game in a new league one could expect a few snags in the fan presentation.  It actually went off OK however.  The end wall feature a few small windows cut out from behind the wood paneling, and it looks like the PA or radio announcers or other staff work from that location.  There was a brief player intro with a spotlight, and not much else in the way of fan interaction.  There was no on ice entertainment or contests during intermission, although that may change as the season goes on. They did hand out free line up sheets to fans, although they featured only the players name and number, not even the position.  The PA system is quite muffled and almost impossible to hear clearly.  None of that really matters however as the on-ice product was very entertaining.  The game featured a couple fights and saw the Barons defeat the Akwesasne Warriors 6-2 on opening night.  There was a decent crowd of over 600 there.  The skill level was much better than expected with quite a few former Division 1 and high level Junior players as well as a handful of guys who have seen action in the ECHL or LNAH, or even higher.  The best part was that it was hard-nosed, smash mouth hockey played by a bunch of guys who wanted to be their and gave it their all.  I'll take that over some AHL guys who are pouting about being sent down to the minors any day.  Clearly it will be an uphill battle for pro hockey to survive in a rink with such a small capacity, in an out of the way part of town, and in a town that already has a well established AHL team.  That does not mean it is now a fun place to watch a game and a great change of pace from the overly corporate, extremely comfortable and modern places that many minor league teams currently call home.  I had a blast watching "the other team in Binghamton".  Who knows how long they will last as rumors of the team's demise started almost as soon as the season did.  I am just glad I was able to get there and photograph the happenings for this site.  Clearly a Barons game is worth the $10 cost of a ticket for a chance to see hockey up close and personal and the way things used to be. 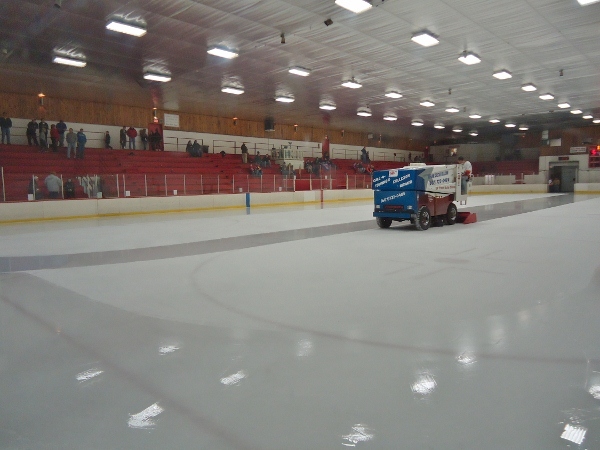 Other information about the Broome County Barons is available at:  Barons Home

Other information about Chenango Ice Rink is available at:  Arena Home