Hockey in Quebec is different, especially for Anglos like us.  Everything is magnified in Quebec.  The fans seem louder, the play a little more intense, and the arenas full of a bit more character, even if they are lacking is some creature comforts that you may find elsewhere.  Centre Marcel-Dionne is a great example of what hockey in Quebec can be.  Having opened in 1963 as the Centre Civique, this arena has played host to the QMJHL since 1982.  The arena sits on the edge of downtown, just off the main drag, and looks a little run down on the outside.  Trees, which likely added visual appeal to the exterior of the building at one time, are now grown up and seem to block much of the exterior.  The brick building is accented by concrete buttresses which run from the ground up to the green metal roof of the arena.  Although not overly large, the structure clearly has that "arena look" that identifies it as a gathering place for the community of Drummondville.  The arena sits raised up from the main road a bit, and a parking lot sits at the rear of the building.  There is an older marquee sign at the corner entrance of the arena, and the size, age, and font of the sign just seem all too appropriate for the throwback nature of this arena.  The building's namesake and Drummondville native Marcel Dionne was a flashy player who was not the largest in size.  Centre Marcel-Dionne certainly shares some of those attributes as it is not large, but is certainly colorful and full of character and charm.

A ticket for this season-opening matchup against Rouyn-Noranda cost $17, and before the game there was quite a buzz with a fan fest going on outside complete with beer garden, souvenir tent and a roaming DJ radio boradcast.  Once inside and past the arena lobby which holds the box office you are immediately on the narrow concourse which runs around the arena, between the lower 4 rows of seats and the rest of the grandstand.  Seating is very steep and made up of 9 rows of colorful wooden seats above the aisle, and 4 rows of blue wooden seats below.  There is no upper seating on the ends, and there are a pair of luxury boxes perched off of the end wall on the far end of the arena.  The seats feature no armrests, but the sight lines are decent from just about every seat.  There is a second concourse which runs along each side of the arena underneath the seating, and there are a couple small concession stands on the concourse with the main food concession being on the end near the main entrance.  The usual Quebec menu items are available in the concession stand including poutine, and the regional version of the hot dog with the toasted buns which are so good.  The arena is impressive, and remains largely unchanged from its 1960's roots.  There is a modern center ice video board, and it is used nicely for the pregame intros.  The building does have its share of quirks as well as the ice is 10 feet short of regulation at 190 feet long, and if you look closely above the rafters you will notice the wooden plank ceiling, which is something you would not expect when seeing the brick and concrete exterior of the arena.  Lots of banners hang from the ceiling, and signage covers nearly every available wall space.  The overall look of the arena is one that is certainly not modern, but is something that has a rather strong sense of history and tradition that makes you feel as though you are experiencing something special when you take in a game here.  As with most of Quebec the team benches are on opposite sides of the ice, and with only 3038 seats the place is certainly intimate and finds the fans on top of the action.  Crowds up to 4,000 do cram into the building with standing room.

The gameday presentation at Centre Marcel-Dionne is typical of the Q, although techno music seems a little less prominent than in some of the other Quebec barns.  Things are loud though, and fans have airhorns and show their support for the Volts from before the puck drop until the end of the game.  It is as if there is a constant buzz of noise, which gets louder with each rush or hit or save, and explodes when there is a goal.  These fans love their hockey and are also there to have a good time and become part of the experience itself.  There is a large flag above the end near the main entrance which has the Voltigeurs logo and is unfurled like a sail whenever the Volts enter the ice to start a period as well as when they score.  The sail is shaken back and forth by folks holding wires and this seems to be quite a tradition in Drummondville.  As you can imagine, the noise level goes up when the flag is out.  We love the fact that fans in Quebec are so vocal, and the noise seems so appropriate to the on ice action, depending on the situation, that it just fits perfectly.  About the only down side to the viewing experience is that fans walking around the arena on the narrow concourse in front of the seats sometime obstruct the view of those in the stands.  Obviously all announcements are in French and we were impressed by the fan participation, (or at least lack of non-participation) when O Canada is played as in much of the Province the anthem is ignored by many.  There are some modern and stereotypical touches to the game presentation as there are hats and items tossed into the crowd at intermission and there was a fun sled race with fan participation as well.  Folks in Drummondville are there to see hockey though, and that is the main attraction.  Local fans left happy as the Volts took a 4-1 win over the Huskies to start their season off on a high note.  They do things right in Drummondville, and we suspect that they have been doing them that way a long time, and that is just what the fans expect.  Watching a game at Centre Marcel-Dionne is definitely like watching hockey with the volume turned up to 11 as things happen fast in the small barn, the setting itself offers some much color and character, and the fans provide the noise...and the airhorns. 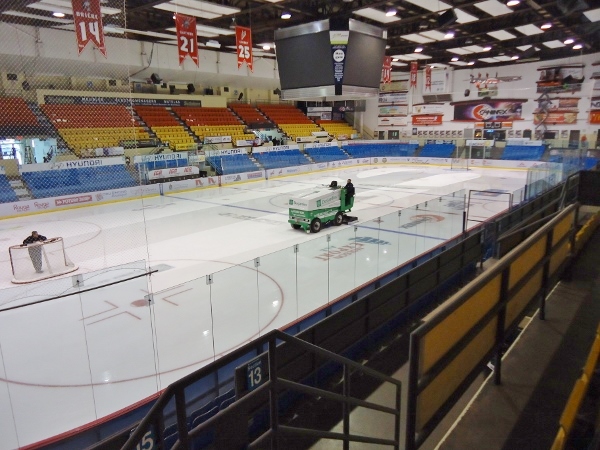 Other information about the Drummondville Voltigeurs can be found at:  Voltigeurs Home

Other information about Centre Marcel-Dionne can be found at:  Arena Home

More photos of Centre Marcel-Dionne can be found  Here