As hockey fans we have all heard the name Georges Vezina.  Banter each spring centers around which goalie will claim the trophy which bears his name.  As you could guess, Chicoutimi is the hometown of this great goalie and original member of the Hockey Hall of Fame.  Although he has been dead for nearly 90 years the spirit of Vezina lives on through this classic arena.  The Saguenay region is separated by the rest of Quebec by some rugged country which features mountains, lakes, and rivers, yet this isolated region is full of hockey tradition.  The center of that tradition has been this simple, yet elegant, house of hockey since its opening in 1949.  Although the arena has old bones, several renovations have brought the arena up to modern standards, and the building has an unmistakeable "arena look" when viewed from the large parking lot which surrounds it.  The most recent renovations in 2013 added an upper glass atrium to the arena's entrance end, and the Sagueneens logo adorns the building as well.  The brick lower exterior offsets the red metal roof and the metal accents on the sides of the building.  Smooth concrete makes up much of the fascia, and looking at Centre Georges-Vezina you would not be likely to guess its been around for 65 years.  A newer electronic marquee sign at the edge of the parking lot announces upcoming events, and the whole property  looks polished and well maintained.  We stopped by the arena a few hours before this 4pm Saturday afternoon game and secured our $16 ticket at the simple box office.  It felt great to be in Chicoutimi, a place that seems far removed, and distant from our home in North Central Pennsylvania.

Once inside the arena and onto the main lower concourse you get a bit of a feel of the age of the arena.  Just inside the main entrance there is a well stocked team store featuring lots of Sags gear, as well as the usual food concession booths.  The arena bowl is impressive, and the width of the Olympic-sized ice sheet is immediately noticeable.  The seats are also set back from the ice about 15 feet all the way around, making for a massive arena floor.  Looking up you see that the ceiling is made of wood planks, although the roof trusses are made of metal and exposed to make for an arching shape.  The ice is surround with 11 rows of red and blue seats, which are now plastic, although we are certain they were wood back in the day.  The sight lines are good, although the roof beams do block some views from some of the higher seats.  A video board hangs above center ice, and there is a second video board on the end wall, although that one seems to play mostly advertisements.  A second concourse runs atop the seating area and has some additional concessions, and there is standing all along the rail behind the seats.  With standees the capacity of Centre Georges-Vezina is listed at 4724.  There are luxury suites on the end near the new atrium, and another section of suites above one side of the ice.  Essentially Chicoutimi has taken an arena built just after World War 2 and upgraded it to where it is sufficient and comfortable enough for the fans of 2014.  It is quite a contrast seeing a video board and suites housed under the wooden ceiling.  Overall the place feels big, largely because of the width of the building and height of the ceiling, but it maintains a classic feel as well.  Of course since the arena is in Quebec the benches are on opposite sides, and the look of the place has a feel similar to many of the other arenas in the Q.

The game day experience in Chicoutimi is typical of many other QMJHL Arenas.  Techno is the music of choice, and obviously everything is presented in French.  Although the crowds was small, at only 1800 fans for this early season afternoon game against Blainville-Broisbriand, the fans are knowledgeable and very into the game.  It is always cool to hear the fans whistling at the refs as that is not something you experience anywhere else in North America, aside from Quebec.  We were surprised at the noise level, and can imagine that this place would be insane with a near sell out crowd.  There are no fan contests at intermission, although a local car dealer does display a car on the ice and the mascot comes out to entertain Sags fans during intermission.  The Sagueneens have been around since 1973 and seen their share of great players come through, including goalie Felix Potvin.  A banner hangs from the rafters paying tribute to alum Normand Leveille, who was a young player for the Boston Bruins when I was in junior high, and who saw his career end after an on ice injury led to a brain aneurysm.  There is a sense of history in the building and the hockey atmosphere is traditional but very fun at the same time.  The game itself was excellent, with lots of physical play, a decent scrap and a shootout victory for the hometown Sags.  We have never been a fan of Olympic ice, so that is not something that we consider an advantage to Centre Georges-Vezina, but the large ice is rare enough to be an advantage for the Sagueneens, and adds to the unique experience of taking in a game here.  A lot has changed in hockey since 1949, but Centre Georges-Vezina allows fans to watch the game in a setting that is modern enough to meet the current "comfort standard" of the average hockey fan these days, yet holds a sense of history, and has the old bones and wooden ceiling which make you reflect back on how hockey was played decades ago.  The fans are vocal, and into their team, and Sagueneens hockey is certainly a tradition in Chicoutimi which will hopefully entertain hockey fans for generations to come. 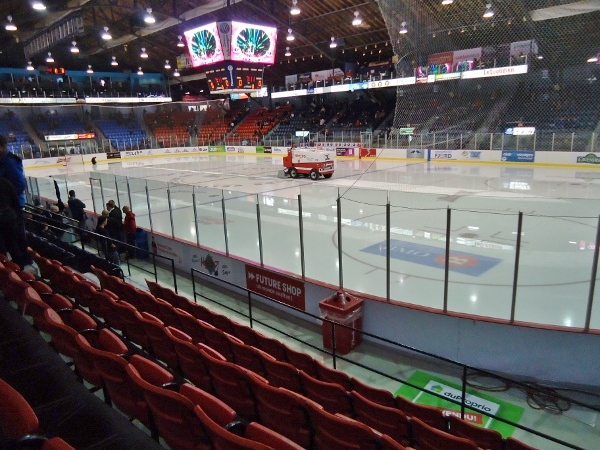 Other information about the Chicoutimi Sagueneens can be found at:  Sagueneens Home

Other information about Centre Georges-Vezina can be found at:  Chicoutimi Arena Home

More photos of Centre Georges-Vezina can be found  Here