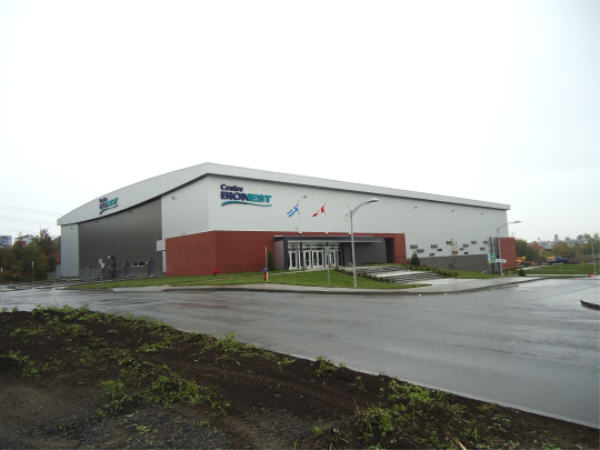 I love the small town of Shawinigan.  It is a quaint place along the banks of the Maurice River and also home to one of my favorite arenas ever- Arena Jacques-Plante.  I first visited the town on a blizzard filled weekend in 2008, and caught a Cataractes game at the classic old barn. Well, the town of Shawinigan is movin' on up as they say as the Cataractes now play in a brand spanking new building next door to the  classic brick structure I consider a part of hockey heaven.  Only a newly constructed parking lot seperates the new building from the old.  Centre Bionest opened in December of 2008, during the middle of the season and is a stark contrast to the old home of the Cataractes.  Although this place doesn't have the history and vibe of Arena Jacques-Plante it is still a fine example of a newer building done right.

The arena has large parking lots on 2 sides offering free parking, and the grounds are rather unlevel.  The building has a modern look that would blend in next to a corporate office building, and is on the edge of town not far from the river.  The exterior is rather spartan and it looks as though some of the landscaping is still under construction.  The box office sits inside the main entrance, designated by a small concrete set of stairs and a small patio out front.   Immediately inside the main entrance is the merchandise booth, offering a very good selection of Cataractes gear.  The concourse itself is not overly wide, and this is not one of the newer style arenas where you feel like you are walking through a mall while traversing the concourse.  Although virtually brand new the place has a bit of an old school feel to it.  Once inside the arena itself you realize this place is all business, but has a big-time feel to it.  Blue seats circle the rink on the lower level, and maroon seats line the upper half of the seating area.  The seats extend higher in the corners than any other part of the rink.  The entrance from the main concourse brings the spectators to a smaller concourse which is basically a walkway between the upper and lower levels.  The sight lines are very good, and the layout seems well thought out.  On the penalty box side there are 2 levels of luxury suites atop the maroon seats.  The other side has a press row which is a good 10-12 feet above the tops of the regular seats and seems a little higher than it needs to be, although I am sure the views from there are fantastic.   At 4300 seats this place is the perfect size for Major Junior hockey as you can see great from every seat, but the building is big enough to have that professional feel to it.   The concourse has the usual food concessions, and tucked away in one corner is an arcade area with video games, which actually looks out of place.

The amenities for the fans are good at Centre Bionest.  There is a good center ice video board which is actually used for replays and to show the action.  Too many newer buildings use their video boards to bombard the fans with ads.  They do it right in Shawinigan.  The atmospere that the fans were able to experience at the old, cramped, run down Arena Jacques-Plante was so good that it can never be recreated, but they do a good job here at the new building.  I was glad to see that the large wooden indian that was perched over one goal at the old building has found a new home high in the corner at the new arena.  No it doesn't swing down over center ice when the Cat's score, but it is a great reminder of the teams history.  The game presentation is done in typical QMJHL fashion with techno music playing for the entirety of warmups (what else would you expect in Quebec?), and a business-like format which emphasizes the game itself.  Yes there is a mascot with a t-shirt cannon, but fans are here to watch the game and don't need a ton of fan contests at intermission or a million give-aways to justify coming out to the rink.  My seat high near the blue line was a reasonable $14.  There is a single zamboni, and a game-centered presentation which just seems to fit.  Banners of former Shawinigan stars hang from the rafters, and despite being new the place is simple and basic enough, without some of the frivolous bells and whistles that are all to common with today's arenas, that it feels like an older barn with more than a year and a half of history.

The game itself was classic Q hockey, with great skating, hard hitting, and an exciting outcome.  Although the crowd was only about 2800, they were very vocal and obviously very knowledgeable.  I also find it refreshing that so many older folks come to the games in Quebec, as I have noticed many elderly couples sitting and enjoying the game we all love on my various stops in the Province.  Visiting Rimouski took a quick 2-0 lead.  The Cataractes scored a powerplay goal with less than 5 minutes left to tie the game at 4, and then fans were treated to a shootout which saw the Oceanic taking the win.  Shawinigan is a beautiful town, and the Centre Bionest is a very good new arena to showcase its hockey.  The layout of the parking lot did make for a bit of a traffic backup getting out, but the main thing was all the fans seemed to have fun.   If newer arenas could be built more along the model of Centre Bionest, instead of modern arena planners trying to jam every possible concession stand and ad space into newly constructed arenas the game could continue to keep its classic old school feel that we all harken back to.  Thankfully fans in Shawinigan still have a building that feels old-school, only now there is legroom and room to walk around the concourse, unlike what they endured at Arena Jacques-Plante.  It will never replace the classic building next door, but I am sure Centre Bionest will build its own history as time goes by. 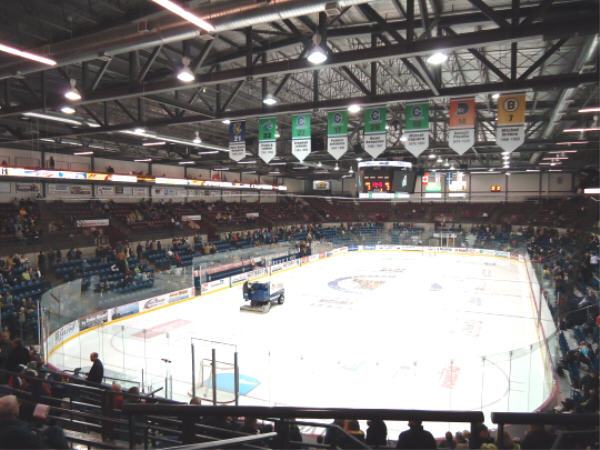 Other information about theShawinigan Cataractes is available at:  Cataractes Home

Other information about Centre Bionest is available at:  Arena Home