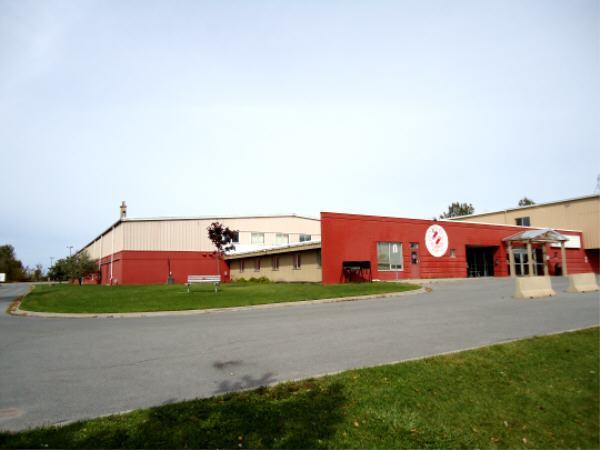 As a stopover on my way to Quebec for some LNAH games I caught a game at the Cataraqui Community Centre, just off Highway 401 in Kingston, ON.  This facility is home of the Kingston Voyageurs, or Vees as they are known to the locals.  They play as part of the Ontario Provincial Junior Hockey League, one of Canada's Junior A level leagues. The team itself dates back over 30 years, however I believe they have played at several different arenas during their tenure.  Cataraqui Community Centre opened in 1993.  The complex itself is home to 2 ice pads, 1 regulation size, and the other a larger Olympic size rink.  There is a large parking lot on the grounds, and the arena sits in somewhat of a suburban area near Kingston.

After entering the front doors to the building you are directly in the lobby and snack bar area.  There are several tables to enjoy your snack bar food as well as a couple flatscreen TVs to watch the NHL games in the lobby.  I did try the Poutine here and it was extremely good, including the genuine cheese curds, not just shredded cheese like some places try to get away with.  On game night you proceed straight from the main entrance, past the small pro shop which sits to your right.  A table was set up selling tickets to the game for $9.  Once past the table and into the area where the arena is there is a hallway with some windows to watch the action from the end of the ice if you choose.  Most people just open the door into the grandstand area and watch from inside however.  I am not sure the seating capacity of the arena, but would guess it at about 800 including standees as there is a rather large area of bleachers, all on 1 side.  There was an additional viewing area of sorts hanging above the ice and enclosed in one corner, which was advertised as available to be rented by the game.  The view from the seats is good, and the arena is quite cold inside.  The most unique feature about the rink is the fact that the glass does not extend all the way around the rink.  On the end of the rink, near the hallway where you can watch from, the glass ends abruptly and the puck can then be played off the concrete block wall behind the net.  In that wall is a set of windows as described above.  It seemed rather odd as the rink does not extend all the way to the wall on the other end of the building, thus if they wanted to they could have moved the ice surface back a couple feet and had the traditional setup, but oddly they do not.  There is netting in front of the bleachers which is slightly annoying, but tolerable.

The level of play and speed of the OPJHL action was impressive, and I enjoyed this game vs the Bancroft Hawks.  There was a pretty sparse crowd on hand, and the game presentation was basic at best.  There was music during the stoppages and a PA announcer, but not much beyond that.  Still I was impressed by the effort put forth by both teams.  I have heard some good stories about how some of the smaller towns really support their Junior A level teams, I just think it is a tough sell in Kingston as they have the Frontenacs in the OHL as the main hockey draw.  This would still be a good stop for hardcore hockey fans to catch a game.  You should probably hurry however as the Vees are moving to a new multiplex arena located elsewhere in Kingston for the 2008-2009 season.

**Note- The photos on this page were taken on  return stops at the arena in September of 2010 and October 2014. 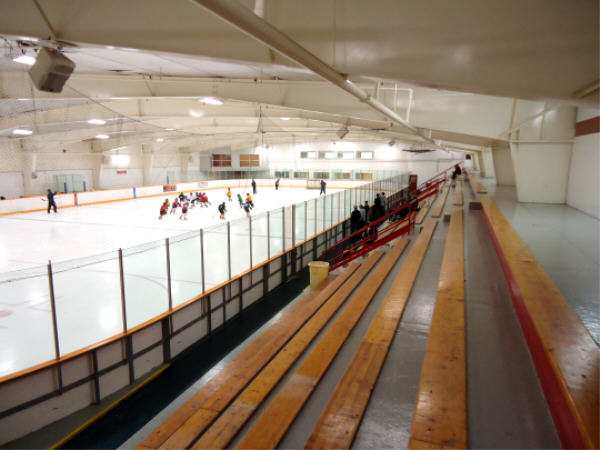 Other information about the Kingston Voyageurs is available at:  Voyageurs home

Other information about the Cataraqui Community Centre is available at: Arena home

More photos of the Cataraqui Community Centre are available  Here