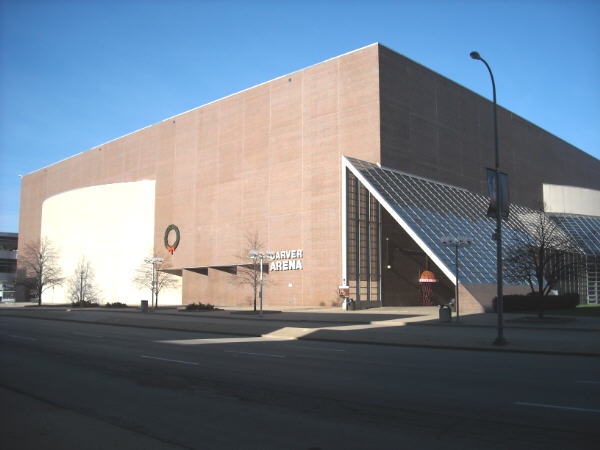 Night one of my midwest roadtrip found me in the Central Illinois town of Peoria.  I was looking forward to this stop as Peoria has a long tradition of minor league hockey, having had teams since the early 70's in the Continental Hockey League, the original IHL, the ECHL, and now the AHL.  Carver Arena is part of the Peoria Civic Center, which also houses a theatre, convention center, and various community activity rooms.  The complex sits right in downtown Peoria and the area is well kept and there is plenty of parking nearby.  I walked over from the hotel, so I did not have to pay to park.  The building was constructed in 1982, but underwent recent renovations (and apparently some additions) as there is a newer glass faced entrance and a nice carpeted lobby which houses the box office area.  The outside of the arena itself is a square brick structure, although there are some modern looking glass attachments and an atrium like area, which I am not sure whether that was part of the original design, or a part that was added in the 2008 renovation.  Nonetheless the building has a neat appearance from outside, although the area near the lobby where the newer glassed in structure meets the older brick part of the building does look a bit disjointed.  There is a very nice team store just inside the side entrance to the newer part of the building, and it was fully stocked with Rivermen gear.

Once inside the arena itself you can tell the place is of the 1980's era.  The concourse is rather dark, but sufficiently wide enough and has the usual concession stands.  There are neat tributes on the concourse to both major tenants of Carver Arena- the Rivermen, and the Bradley Braves.  There is memoribilia from past teams and a wall of fame as well.  Oddly enough although the outside of the building is squared off the concourse is almost completely circular.  Fifteen bucks got me an upper level seat not far from center ice, but this wednesday game against the Texas Stars was so sparsely attended that I could pretty much have my pick of seats.  The entrance to the seating bowl from the concourse comes out at the top of the lower bowl.  Once inside you are  immediately confronted with how big the building is.  The arena holds just over 9500 for hockey,  but the high ceiling and open feel make it seem even bigger than that.  It reminds me a lot of the Richmond Coliseum in Virginia.  The seats are also asymmetrical as the seats on the sides and the ends extend much higher than the seating in the corners.  The walls themselves are brick, and rather weathered, but that adds to the charm of the building.  It is also very hard to forget which team you are here to see as there are huge murals of both the Rivermen and the Bradley Braves which sit atop the seating area in opposing corners.  Overall the place has an old school feel to it.  I was intrigued by the small press box type structures on each end above the last row of seats.  I am not sure if they are used by radio broadcasters, of arena staff who use them to run the lights, but they have a Slapshot look about them.

The sight lines are OK, but the lower level does not seem to be sloped enough, and although the upper level seats are steep there are annoying railings seemingly everywhere which do block your view a bit.  The railings  are even in front of the seats behind the glass in the corners, so a front row seat is obstructed somewhat as well.  The obstructions didn't matter a whole lot as with an announced attendance of 3835 (the actual number looked much lower than that) there was penty of room to move around to find a spot where you could see.  The old style maroon padded seats are comfortable enough, and  the center ice video board was more than sufficents.  It was also neat looking around and seeing the championship banners from the IHL and ECHL years of Rivermen hockey.

The game presentation is typical, although the music selection seemed a bit dated.  There were the usual between period contests.  A first for me was seeing a video giving instructions on how to evacuate the building in the event of an emergency which was played over the video board before the game.  I am guessing that the possibility of tornado activity in the midwest is what brought this about.  Nonetheless the game presentation was fun, although with such a small crowd it lacked a little bit of intensity on the fans part.  Also the acoustics in the building seem odd in that even in the top row you could clearly hear every stride a skater took, and a thud everytime the door to the benches closed.  This place would be very fun with a large crowd as the building itself just reeks of hockey history.  The fans seem somewhat subdued, but not afraid to show their support for the Rivermen.  The game itself turned out to be a dandy as it featured a real good scrap and the Rivermen came back after trailing midway through the third period to take a 5-4 overtime win, sending the locals home happy.  The Carver Arena is a good place to catch some hockey.  With a big crowd on hand this place could be a great place to catch a game, and I am sure the midweek game that I attended may not have been the time to catch this place at its best. 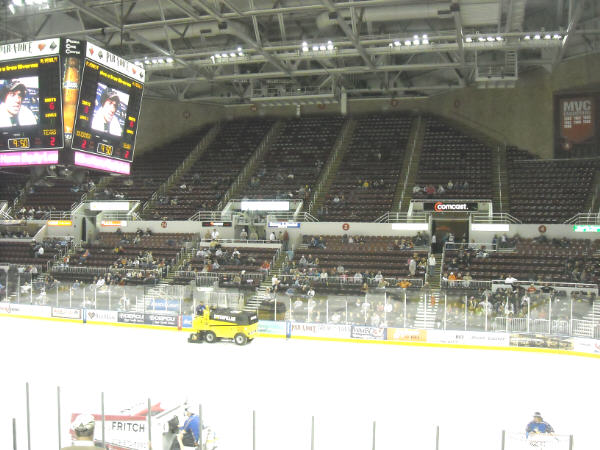 Other information about the Peoria Rivermen is available at:  Rivermen Home

Other information about Carver Arena is available at:  Arena Home