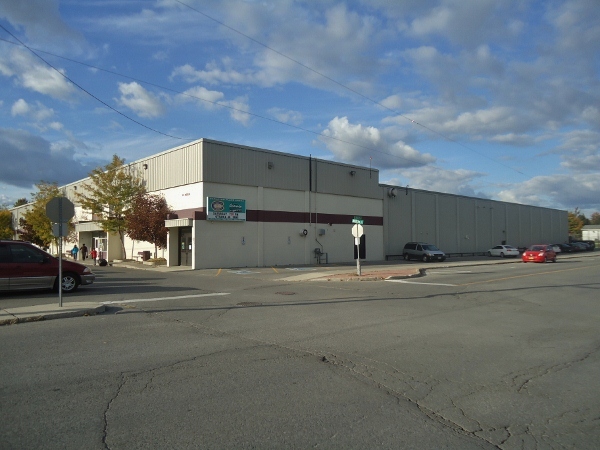 After a Saturday afternoon Ottawa 67's game at the 20,000 seat Scotiabank Place it was time to head 25 minutes southwest to the small town of Carleton Place, home of the CCHL's Carleton Place Canadians.  I wasn't really sure what to expect, and a few billboards around town advertising the team was a welcome sign that the team is well supported by the community.  Carleton Place arena is tucked away on a side street behind the town's hospital and near a park.  It is clearly more of a community rink rather than a big time arena, but that is not necessarily a bad thing.  There is a small parking lot near the main entrance, and an even smaller parking lot along the side of the building, as well as plenty of parking on the street.  The building itself is rather unassuming, with beige cinder blocks making up the lower half of the exterior, and brown metal siding across the top of the building.  A wide maroon stripe breaks up the color on much of the building, and there is a sharp marquee sign on the corner of the building which announces upcoming games.  The building has a very low profile and low roof, and houses 2 ice pads inside.  The arena building also serves as a community center with meeting rooms which host various town functions.  The building itself has been there for quite some time, but a 1981 renovation of the facility added a second ice pad.  From the parking lot the early 1980's stylings make it look like it could be a school or other municipal building of that same era.  Despite the spartan setting hockey in such intimate venues is usually a blast.

Once inside the main entrance door there is a rather weathered lobby which houses a pro shop, a concession stand and some trophy cases which house awards garnered by local teams of the past.  Both ice pads get a lot of use, and there is an extremely large pile of lost and found items including single gloves, hats and scarves on  a table just inside the main door.  The Canadians have a table set up on game night where tickets and programs are sold.  A $12 ticket for tonight's game against the Ottawa Junior Senators included a free puck given away advertising a local law firm and a coupon for a free hot chocolate.  Programs were $1 and had a decent amount of info.  Just past the ticket table you enter a small door into the arena itself.  This place is all business, with a single grandstand running along one side of the arena.  The capacity is listed at 1000.  There are 8 rows of seats, mainly made up of maroon wooden benches on top of the concrete slabs which make up the seating rows.  There is a section of reserved chairback seating in the center ice area.  The glass is low but there is netting in front of the entire seating area.  The ceiling of the arena is equally low, thus necessitating the scoreboard to be on the end wall of the arena.  The zamboni door is near the faceoff circle on the far side of the ice from the grandstand, and they use a small projection screen situated next to the benches as a message board displaying game info and ads.  There is a small pressbox in the corner of the arena.  Plenty of fans also chose to stand at ice level along the end glass.  The overall setup of the arena can best be described as basic, but they make the best of what they have to provide a fun night at a hockey game.

The gameday experience was surprisingly professional for such a small capacity arena.  There was a pregame laser  light show on the ice with the team logo to get the fans pumped.  There are an impressive number of advertisement signs throughout the arena, taking up almost every spare wall space available.  The entire wall behind the benches is covered with ads.  There are ads on the boards, on the ice and hanging from the rafters in front of the grandstand.  Despite the large presence of ads you do not feel like the entire game presentation is simply an infomercial like you do at some modern arenas.  This is simply Junior A hockey, played in an old fashioned barn in a town with a lot of support for the team.  The temperature is also very cold inside the building, and that is the way it should be.  The hometown crowd did not have a lot to cheer about though as Ottawa took a 4-1 win, but the Canadians lone goal came with 1 second left to spoil the Ottawa shutout.  The attendance according to the box score was listed as 387, but the arena looked more than half full to me.  Carleton Place Arena is not a modern, or state of the art building.  There are quite a few larger arenas even in the CCHL.  It is a fun place to catch a game though as it harkens back to times when hockey was simpler.  A small town arena in an area that supports its team is always a fun place to stop. 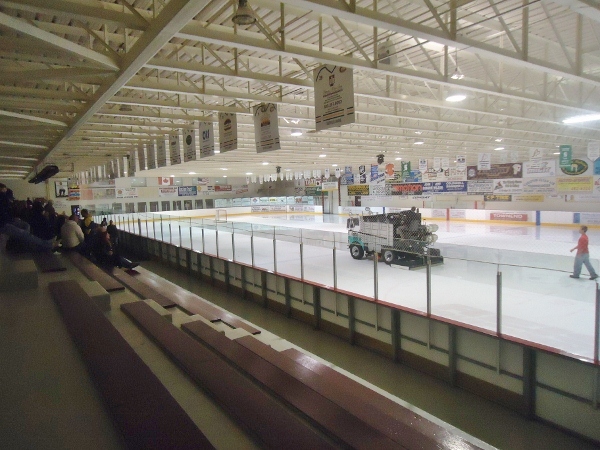 Other information about the Carleton Place Canadians can be found at:  Canadians Home

Other information about Carleton Place Arena can be found at:  Arena Home

More photos of Carleton Place Arena can be found  Here