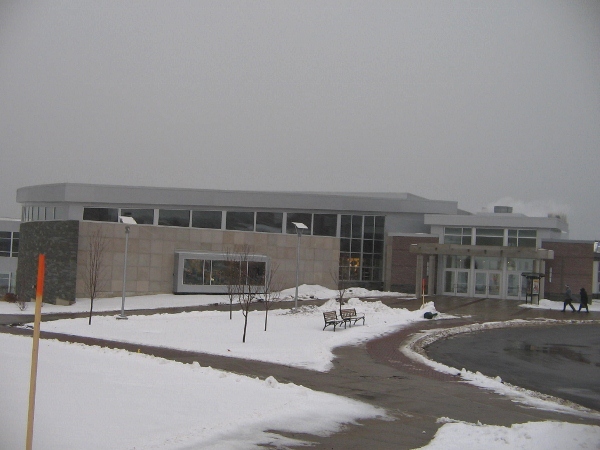 A return trip to Oswego was in order just after the New Year to catch another game and get some photos for this site.  The afternoon matchup versus New England College worked nicely as it also allowed me to catch the Syracuse Crunch game that evening, killing 2 birds with one stone.  The Campus Center is a newly built facility, which opened for the 2006 season, and replaced the older Romney Fieldhouse as home of the Lakers.  Unfortunately I never made it to Romney, but heard it was a really fun barn with some loud fans.  I was able to attend a game at the Campus Center last year for the NCAA playoff matchup vs. Norwich in March, and this place impressed me then.  That trip was also memorable as it was about a week after the record snow storm which found well over 10 feet of snow falling in the area.  I have never seen such huge snowbanks as I did on that trip.  Of course it also snowed on this most recent visit, although lightly.

The new arena sits right on campus, and is within sight of Lake Ontario.  There are quite a few parking lots around, and I had no trouble finding a spot on either visit.  Today's game cost $6 to attend, and you enter the building from the side furthest from the lake.  There is a modern box office to the left as you enter, and you are then on the upper level of the seating bowl, yet still outside the arena itself. You can see into the arena through a glass wall without actually entering.  There is a newly added school store next to the box office, which was not yet complete on my first visit last March.  As this is also a multi purpose campus building there are several other rooms, and even a sitting area with a fire place just past where you enter the main arena and hand in your ticket.  There was also a large remote control zamboni driving around the lobby, something I had never seen.  Upon entering the arena itself you are at the top of the seating area on the concourse, on the end.  Being as new as it this this arena is first class all the way.  The food concession is to the right as you enter, and also on the open concourse so you can watch the game while in line.  There are restrooms on both sides of the rink, and they seemed more than adequate.  The seating itself is in a horseshoe design on 3 sides of the rink, with the end away from the entrance devoid of seating.  That wall is all glass, and overlooks the lake, although there are curtains drawn during the day.  There is standing room at the top, and this appears to be a popular place to watch the game yet the aisles are more than wide enough to allow standees and people to walk around freely.  There are a few trophy cases throughout the concourse with various memorabilia and trophies of the Lakers' past success.  There is a large pressbox area on the west side of the rink which is named for ESPN commentator Steve Levy, an Oswego State alum.  The seats themselves are the modern plastic type, and the lighting in the building appears overly bright.   There is also a large video scoreboard over center ice, however they do not use it for replays at all.  The PA is strong as can be expected.  That is one pet peeve of mine- having a nice video scoreboard, yet not using it to its fullest. The team benches are on opposing sides with both penalty boxes next to the Lakers bench.   My only other complaint was that the cost of a program book was extremely high at 5 bucks.  Yes the magazine was nice, but I just wanted a lineup sheet.  I ended up begrudgingly spending the $5 to get one.

The atmosphere was good as I like rinks that are right on campus.  On my first trip the crowd was extremely rowdy, and there was large student attendance as could be expected for a playoff game.  Today's game against NEC occurred while the students were on break, yet the game was still well attended.  The crowd was much more tame however.  The total capacity is listed at just over 2500.  The Oswego fans are a hearty bunch, having to put up with downright nasty weather.  The town support for the hockey program appears strong as well as there were plenty of people at both games who seemed to be town residents with not much tie to the university itself.  The place is a fun place to watch a game, and even though it is an ultra-modern arena it still has a good die-hard hockey atmosphere.  It is hard to believe this is a Division 3 arena as it is better than many Division 1 rinks, and if the seating capacity was a little higher would be on par with a lot of minor pro arenas.  I wish I could have taken in a game at the older Romney Fieldhouse during its heyday, but will say that a trip to the Campus Center Ice Arena is enjoyable.   It certainly was neat to have seen the Lakers last year in their final home game before they ended up winning the Division 3 National Championship. 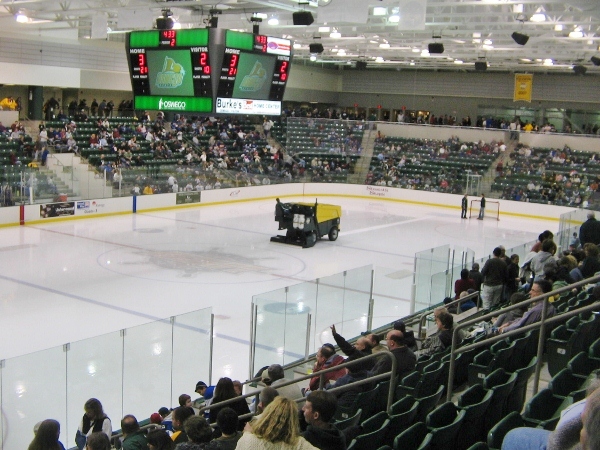 Other information about the Oswego State Hockey Program is available at: Lakers Hockey Home

Other information about Campus Center Ice Arena is available at:  Arena Home