Surely you have heard the chants at sporting events.  You know, the one that goes "Whose house?  Our house!"  We think that is an excellent chant which mocks opposing teams and fires up the boys on your side, just don't try to break out that cheer at a Canisius hockey game.  You see, the Golden Griffins do have what many teams consider an advantage in that they play at an on-campus arena.  It is just not on their campus.  The Buffalo State Ice Arena sits on the campus of Buffalo State College, a couple miles down the road from Canisius' own campus.  The large arena complex essentially consists of a hockey arena and a basketball arena configured end-to-end, all under one roof.  The arena also houses the Buffalo State Bengals teams, including their Division 3 hockey team.  In fact a Buff State women's basketball game was going on at the same time as this Division 1 matchup between Canisius and Holy Cross.  The arena is a rather large tan brick structure which has that "arena silhouette" when viewed from a distance.  The brick is offset by a green metal roof on the building, which opened in 1991.  We chose to take in the action on a snowy Saturday afternoon, just after the Punxsutawney Phil's forecast of an early Spring.  What would a trip to Buffalo be without snow?  The outside shrubbery leading to the main entrance ramp is pruned into the letters which spell "Buffalo State", but their appearance was covered by 5 inches of snow which was falling before and during the game.  The main entrance to the building sits in between the basketball and hockey portions of the building, with a landing out front and a long, semi-open ramp which extends up to the concourse level and enters on the basketball side of the arena.  The ramp and its concrete and brick walls look similar to what you would find at a subway station.  The facility itself is nothing remarkable, but is certainly sufficient for the crowds which Atlantic Hockey teams draw.

Tickets for the game are sold from a table set up on the concourse lobby, which also contains the food concession, complete with tiger logos for the Buffalo State Bengals.  A $10 ticket seemed reasonable compared to the prices some New England schools charge to see their hockey games.  A merchandise table is also set up selling Griffins gear.  In fact, as I arrived early for the game and had a conversation with one of the team game day assistants, nearly everything for the game presentation when the Griffins take the ice is set up and torn down since this is a borrowed home.  The lobby of the arena has a large number of plaques recognizing athletes from Buffalo State sports history, and everything seems modern and well kept.  The ice arena itself is accessed through a set of doors and is a basic twin grandstand design.  The stands on the bench side are wooden fold out style bleachers 10 rows high.  There is a wide concourse which runs around the top of the seating area.  The stands on the side across from the bench are a little different in that they are wooden benches built onto a concrete slab.  The front row on that side is also set back from the ice more than on the bench side.  There are orange painted railings in the aisles on the bench side, whereas there are none on the permanent side.  The is plenty of standing room along the rail above the top row, and more than enough seats for the crowds a Griffins game draws.  Capacity is listed at 1,800.  There are windows which look out onto the campus from atop the concourse, and with this being an afternoon game you could get a good look at how much lake effect snow was falling during the game.  The Buffalo State Ice Arena is nothing fancy, but there is not much to detract from it being a decent place to watch a game either.

The game day experience for this game was rather basic, but there was a chuck-a-puck contest, a stout PA system which rocked the usual tunes during stoppages, and a polished feel to the presentation.  It was just odd looking around and feeling like you were a fan at a neutral site game.  The only indications that the Griffins call this place home are a single banner at one end of the ice, and team banners for all of the schools in the Atlantic Hockey Conference hanging above the ice in addition to the Bengals banners and signage.  There are basic scoreboards on each end wall, and a press box built into the wall on one side of the arena.  One quirky and different aspect of a Griffins game here is how they celebrate when they score.  It is not uncommon for teams to have someone in charge of the goal horn, but since games here are essentially a "set it up and tear it down" experience the Griffins have a student assigned to wheel the goal siren on a cart and position it on the end where they are shooting.  At the appropriate time the kid cranks up the air-raid siren and the celebration begins.  He also sounds the siren when the team takes the ice to start each period.  That is a cool volunteer job if there ever was one, even if there is a little bit of heavy lifting involved.  The stands were less than half full with a crowd of about 600 on hand, and I imagine seeing the Buffalo State team play on this ice may provide a more intense fan experience since its student dorms are steps away.  The arena is certainly one of the busiest in the area as well as in addition to Canisius and Buffalo State the GOJHL's Buffalo Blades call Buffalo State Ice Arena home.  The word is that the Griffins will be moving to downtown Buffalo when the new practice arena for the Sabres opens in a couple years, although they will be sharing that building with the OJHL's Junior Sabres.  That's OK though, the goal siren cart has wheels and they have lots of practice playing in a shared building. 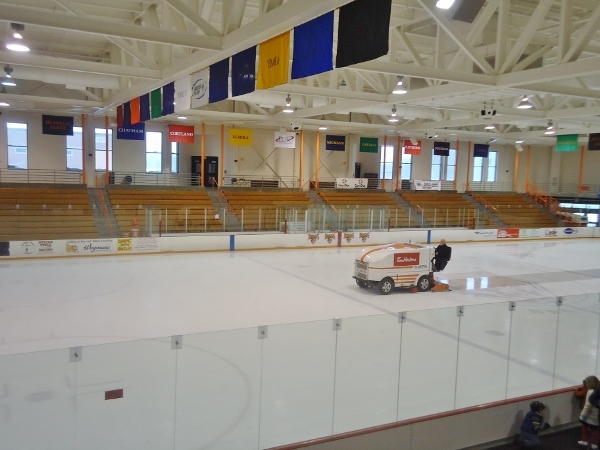 Other information about Buffalo State Ice Arena can be found at:  Arena Home