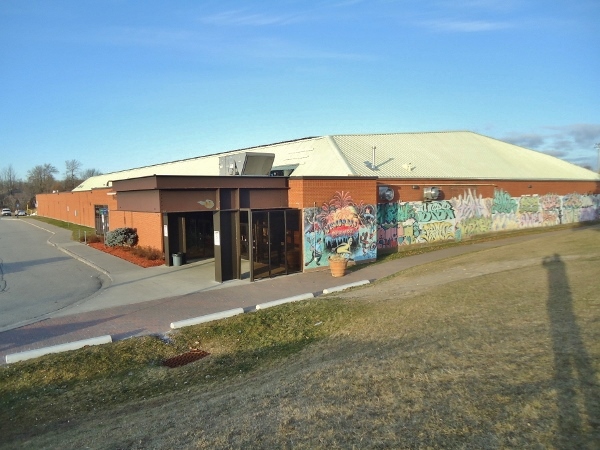 Brockville is a picturesque city on the St. Lawrence River at the Eastern edge of the 1000 Islands Region.  It is also home of the Braves, who have been a mainstay in the CCHL since the 1960's.  Players such as Larry Robinson, Terry Carkner, and more recently Wayne Simmonds honed their trade here.  The Brockville Memorial Civic Centre has been the Braves' home since opening in 1981, and the sprawling brick building sits a block off the main drag next to a city park and near a residential neighborhood which is seeing some high rise condos spring up.  A huge parking lot sits in front of the arena, and above it is a skate park and ball fields.   A pale green metal roof sits atop the building and there is an industrial looking metal awning at the main entrance, which sits at the corner of the building near simple, small block-letter sign indicating the arena's name.  Of note is the odd graffiti mural which sits on the end of the building.  This was in fact commissioned by the city in 2010 as a project completed by local youth.  Honestly, the mural looks a bit out of place, but it adds a unique touch to an otherwise rather bland looking brick structure.  The Memorial Civic Centre includes a second ice pad, meeting rooms and other facilities to serve the Brockville citizens.  The simple structure has an old fashioned feel to it, and has served the city well.  Tickets for this Friday night contest against the Cumberland Grads were secured for $12, and are purchased from the table set up in the lobby on game nights which sells Braves tickets as well as 50-50 tickets.  The lobby is also brick and has a nicely done Brockville Sports Hall of Fame which features photos of past athletes from Brockville and the surrounding areas.  The local pride is evident here, and the crowd, made of of quite a few older folks, has been enjoying Braves hockey for decades.

Once inside the Brockville Memorial Civic Centre you find a simple layout consisting of seating on one side and one end of the ice surface.  Along the end of the ice near the main entrance is a small concession stand selling snacks, as well as a table selling programs and 50-50 tickets.  There are photos of past Braves who have gone on to play in the NHL, and a few trophy cases displaying the hardware of past success of not only the Braves, but also the local minor hockey teams.  The Junior B Brockville Tikis also call the Civic Centre home.  The arena's low ceiling is buttressed by bright yellow support beams, and the seating area is made up of maroon plastic seats 11 rows high.  Seats can be accessed via a staircase to the top of the grandstand and an aisle that runs across the top and also provides standing room, or through the lower concourse hallway which runs underneath the stands and is the location of the main food concession stand.  Cinder block walls give the building a 1980's feel, and the rake of the seating is not overly steep so sight lines are not that great.  Yellow railings compliment the ceiling beams, and the grandstand risers are made of plywood.  This is certainly a simple venue, but with a capacity of 1800 plus standees this is the right size arena for a Junior A club to call home.  With the way the seating is configured you can't help but picture in your mind a sharp looking 3600 seat venue with seats wrapping all the way around.  Instead, what you have is basically half of that picture.  Like so many arenas in Ontario, the dreaded safety netting covers the entire seating area.  With such a low ceiling there is no center ice scoreclock and a single scoreboard sits on the end wall above the goal on one end.  The Brockville Memorial Civic Centre is certainly a no-frills venue, but it does have a homey feel to it and you can feel the tradition of Braves hockey here.  Although nothing fancy, the facilities are on par or better than a lot of arenas at the Junior A level.

The gameday experience and presentation at a Brockville Braves game is laid back yet fun.  There are a few fan contests to get attendees involved including a chuck-a-puck contest.  During the second intermission a car from a local dealership is brought onto the ice to showcase the "car of the game" in a bit of advertisement.  The fans are here for the game however, and the smallish crowd of 300 or so are educated hockey fans who know the game and understand the subtleties of hockey.  Fans are not that loud or boisterous, but know when to cheer.  The Braves added some excitement to the night as 3 third period goals gave them a 4-2 win in comeback fashion.  The feel of the presentation is that of a bit of a step back in time.  The music selection is full of 1980's hair bands, and thing are presented in a way that has a retro feel.  If you like Motley Crue you will like attending games here as you will hear their songs often.  The goal horn is very loud and the low ceiling magnifies the sound when the Braves score.  During playoff action this arena certainly gets much larger crowds, and the team does a good job with media coverage as many games are shown on Youtube, and there is often a weekly highlight show produced.  Attending a game at the Brockville Memorial Civic Centre is exactly what you would expect in a small city in Canada.  Fans are supportive but rather quiet, the facilities are simple, and the presentation is focused on the game. With the longstanding tradition of the Braves, and the Larry Robinson banner hanging from the ceiling this is a place with a bit of history and a very strong sense of community pride.  With so many teams within a couple hour drive the CCHL is a great league when it comes to rivalries. Barns such as the Brockville Memorial Civic Centre are a hallmark of Canadian culture across the country, and provide much enjoyment for local residents. Other information about the Brockville Braves can be found at:  Braves Home

Other information about Brockville Memorial Civic Centre can be found at:  Arena Info Page