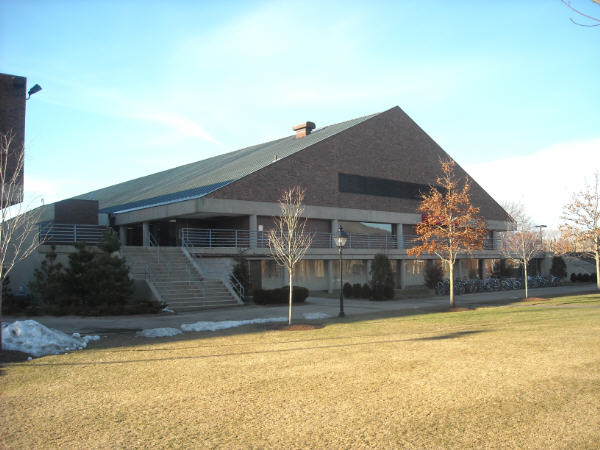 Harvard is best known for its elite academic prowess, but they also have a neat, old-school hockey arena as well.  I arrived on campus about 3 hours before game time to secure my tickets to the game and had a chance to experience the scholarly greatness of its students first hand when I gave the student at the ticket office a $50 bill for two $15 tickets, and was promptly handed a 20 and 2 5's back as change.  Oh well-  Harvard isn't really the math school in town, that would be MIT.  Thankfully I am honest and pointed out the mistake to the confused kid.  You are probably saying to yourself that Harvard is in Cambridge, not Boston (which most of it is), but the arena is in the athletic complex area of the campus, which is across the river in the Allston section of Boston.  My Step Dad Bob and I rode the subway to the game, so I cannot comment on the parking.  The rink was a 10 minute walk or so from the Harvard Square stop on the "T".  Its sits next to the Harvard Stadium and is accessed by walking through some neat old wrought iron and stone gates which separate the campus from the street.  From the exterior it looks rather small, and fits in well with the campus buildings around it.  There is a small grassy courtyard which separates the arena from a few other campus buildings and athletic facilities.  The rink opened in 1979, but sits in the same spot as Harvard's older ice rink.

To enter the arena you go up one of the flights of stairs which flank the end of the building.  There is a box office there as well.  Once inside this place is all business.  After you enter the doors you find yourself on the concourse which runs all the way around the top of the seating area.  The ceiling over the concourse seems rather low, with the roof peaking in the middle over the ice.  Metal beams support the roof, but it is nice to see an old-style wooden ceiling at this arena.  The seats themselves are red (or crimson if you Harvard fans prefer) plastic bleachers with odd backrests, which are contoured for each individual seat.  The seats in each corner extend higher than the rest, and we ended up sitting in the top row in one corner.  The sight lines were good, but the rafters in the corner did limit our view of the video scoreboard.  That is not usually a big deal for me as I could generally care less about a video board, but I must say the video board at Harvard puts all the rest to shame.  The picture quality is crystal clear, and that fact that the picture is so good is even more apparent when you consider that this place only seats 2850 people.  Before the game they showed an outstanding video tribute to the history of Harvard hockey.  That alone is worth a watch.   Too many places use the video boards to simply show commercials, but here they use it to add to the enjoyment of the game experience.  They could be a little quicker with the replays though, as they basically show the broadcast of the game real-time on the screen, and then replays between periods.  There is standing room at the top of all but the corner sections as you can stand on the concourse and look over the people in the last row.   The ice surface itself is also a bit quirky as the ice is 204 feet long and 87 feet wide.  I am not sure who is responsible for designing this, but if the arena were not from the 1970's I would guess that the kid who tried to figure out the change for my ticket purchase may have had something to do with it.

The building has a definite charm and character.  There are photos of past Harvard teams adorning the walls.  The wooden ceiling makes the building feel older than it actually is.  The most prominent feature of the arena's interior is the NCAA Championship Banner from the Crimson's amazing 1989 season.  The banner is HUGE.  That paired with the fact that the building itself is not all that big makes it pretty hard to miss.  Clearly they are proud of their '89 championship Crimson team.  The ends of the arena feature a open air pressbox on one end, as a concession and food area on the other.  The pressbox is neat and seems to almost hang over the end of the ice.  I was pretty psyched to catch a game here as the arena is on campus, which usually means rowdy student fans and an entertaining pep band.  Unfortunately this game had neither as there was no pep band present.   There was also limited student attendance despite this being a Friday night game.  I am not sure what to attribute that to, but it was a holiday weekend so many students may have gone home, or the band and students may have been nearby at the basketball game.  I did see that the following night's game vs Cornell, which was on TV, featured a pep band in the corner section of the stands, and a vocal student section, so despite this not being the case on my visit, you may very well experience a raucous crowd there.  The game matchup itself against Colgate was a good one, and Colgate did bring a hearty cheering section to the game to make things interesting.  Harvard kept the local fans happy by taking a 3-2 win.  If you are in the Boston area the Bright Hockey Center is definitely a place to check out as even from the top rows you feel like you are right on top of the action.  The tradition and campus setting also make this place a fun stop on anyone's travels. 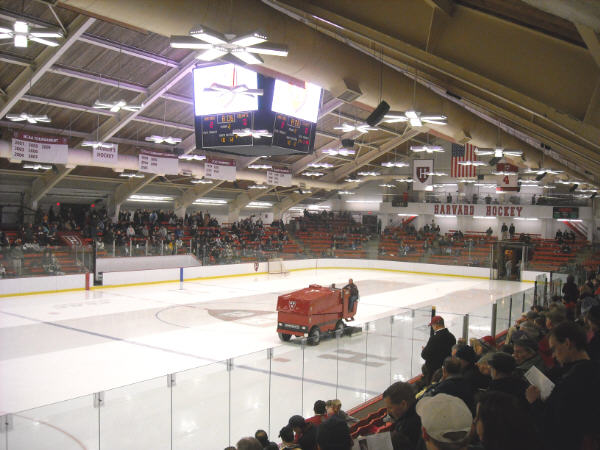 Other information about Harvard Hockey is available at:  Crimson Hockey home

Other information about the Bright Hockey Center is available at:  Arena home

More photos of the Bright Hockey Center are available Here