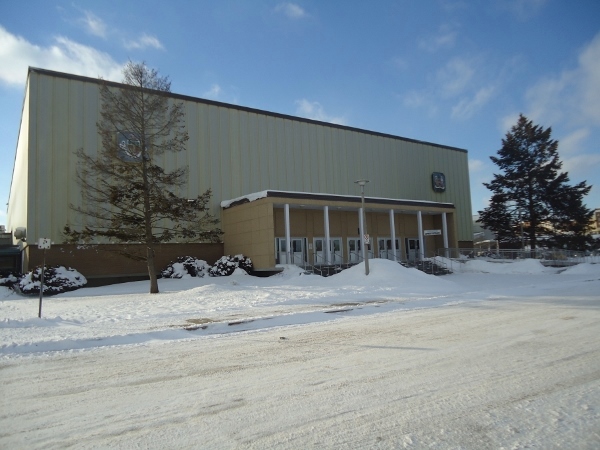 Brantford is known for several things, including car thefts, but it is most commonly known as the home of the first family of hockey.  From the main thoroughfare known as Wayne Gretzky Parkway, to the new arena known and the Wayne Gretzky Sports Centre, this is town synonymous with the Great One.  Hockey is alive and well in Brantford, although the current incarnation of hockey at the Brantford & District Civic Centre may be off the radar a bit for many hockey fans.  The simple square box with faded yellow siding opened in 1967 and hosted the OHL's Brantford Alexanders, and later the UHL's Brantford Smoke.  The arena has signature 1960's styling on the exterior, and the lower area of the exterior walls are brick.  A flat roof and simple square entrance  area also highlight the outside of the building.  A cool feature that remains unchanged, and is a reminder of the fact that this is a 1960's era building, is the quirky marquee sign which sits near the entrance to the parking lot.  It can best be described as looking like a sign out of the "Lost In Space" TV series.  The windowless exterior is about as unassuming as you can get, and is not exactly visually appealing to passers by.  Still, you can tell this simple building is a place of hockey character and history.  The arena sits on the edge of downtown and is directly next to a casino.  So, while senior citizens are smoking cigarettes and staring at slot machines and complaining about their mundanes lives, there is entertaining and high quality hockey taking places only steps away.  The Brantford Civic Centre is a hanger-on from a bygone era, but is still a great building to experience hockey.

After entering the main entrance of the Civic Centre and into the main lobby you find a pair of glassed in, old style box offices.  Tickets for the Blast are general admission and cost a mere $10.  A fresh coat of paint has been laid down in the lobby, and a concourse runs around the arena at ground level.  Be careful walking around the concourse though, as there are large steel support pillars directly in the middle of the hallways.  Texting and walking would not be recommended here unless you want a concussion from banging your head against a pillar.  The lobby has a pair of concession stands and a simple merchandise table selling Blast gear.  It looks like there are some trophy cases in the main lobby as well, but they may have been cleared out when the new coat of paint (which still had wet paint signs in some areas) was laid down.  The main seating bowl circles the entire ice surface and features colorful red, yellow and blue wooden seats 9 rows high.  An old style pressbox hangs from the rafters on each side of the ice, and there is an upper concourse around the top of the seating area as well.  The upper concourse is accessed via stairways in the four corners of the arena.  The front row of seats is raised up from the ice, and is set back about 10 feet from the boards as there is also an aisle in front of the seating area.  An open beam ceiling shows evidence of the flat roof, and the beams are painted a gaudy mint green color.  The listed capacity is just a shade under 3,000 at 2,981.  There is also standing along the rail above the seats.  A simple, older center ice score clock serves the purpose and the sight lines are generally good.  The Blast are clearly the main tenant and their logo is prominent throughout the building including at center ice.  The Blast have had success over the years, and won the Allan Cup National title in 2008 as the tournament host.  The banner is displayed at the end of the arena.  The Civic Centre exudes character and history.  Sadly the arena is also home of a tragic piece of hockey history as it is on the Civic Centre ice in December of 2008 that Don Sanderson fell and hit his head on the ice after slipping during a fight and passed away 3 weeks later from his injuries.  We kept that somber piece if history in mind while in attendance for this game.  For a 1960's era arena this Brantford & District Civic Centre has the bones of a place that could still house an OHL team.

Our only exposure to Senior A hockey was in Quebec a few years back with the old LCH.  We were thoroughly impressed with the game presentation and quality of play here in Brantford, although we were not entirely sure what to expect.  The players are not amateurs as they are paid (some quite nicely) and the rosters are made up of many guys who spent time in the AHL, ECHL, and each team had a few former NHLers as well.  This is big time hockey, but goes largely unnoticed in Ontario, and completely ignored by the American media.  This game against the rival Dundas Real McCoys featured a battle for first place in the league, and saw quite a few fans make the 30 minute ride over from Dundas on this freezing night.  Attendance was not announced, but there were approximately 1000 people in attendance, and boy were they loud and very into the game.  Every time there was a big hit or scoring chance the crowd erupted.  The hockey was extremely physical, and intense.  The Blast have a good thing going in Brantford and the games allow locals to watch a very high level of hockey at a great price.  In attendance on this night was none other than the father of the Great One, Walter Gretzky, as he is listed as an honorary chairman of the team.  As he walked the concourse he was greeted by fans and asked for photos.  We enjoyed out brief conversation with Brantford's favorite citizen.  The presentation at a Blast game is very laid back, yet professional at the same time.  There are quite a few fan giveaways, a fan frisbie toss at intermission, and a general buzz inside the arena that a Blast game is the place to be in Brantford.  The arena PA is loud and clear, and despite the arena's age it really does not lack any of the necessary elements needed to house a big-time team.  One odd thing we noticed was that the scoreclock was turned off during intermission.  It seems that the length of the break between period was simply the amount of time it took for a quick contest and for the zamboni to make new ice.  The game was about as good as you could get, as the first place battle had a playoff feel and featured great goaltending, lots of hits, and a 2-1 Blast victory in an extended round shootout.  With the Allan Cup Hockey League (formerly known as Major League Hockey) not getting the attention that the OHL, and even Junior A gets you would think that hockey in Brantford has sort of fallen off the map.  If you attend a Blast game you will realize that is far from the truth as hockey is alive and well in the land of the Gretzky family, and the locals in Brantford seem unconcerned with the lack of attention, and will just go about their business while enjoying Blast hockey in this classic building. 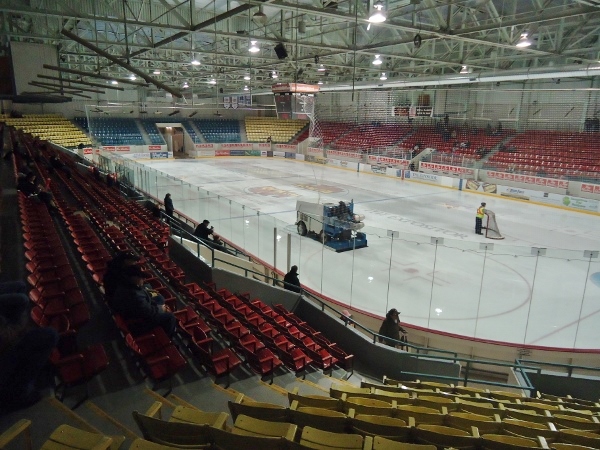 Other information about the Brantford Blast can be found at:  Blast Home