Milwaukee - Home of Harley-Davidson, Miller Brewing Company, oh, and Laverne and Shirley.  Milwaukee was actually the "filler" for my trip as it was the only thursday night game within 400 miles of Indianapolis, where I landed for my trip.  Honestly I wasn't much looking forward to attending this game.  Here's why:  I don't generally enjoy large arenas, and as a current NBA arena this place could clearly be classified as large.  Furthermore I hadn't heard too many great things about Milwaukee, so it wasn't neccessarily a must see city on my stops.  Thirdly, although the Admirals usually rank near the middle of the pack attendance wise I figured a midweek game early in the season would be pretty empty, thus making the place seem like a morgue.  I was correct on the attendance part, but wrong on all the other counts and had an absolute blast on my trip to Milwaukee.

The Bradley Center sits in a decent section of the city, surrounded by other sports and entertainment venues.  Directly next door is U.S. Cellular Arena, better known as the MECCA, which used to house Admirals hockey in the mid 1980's.  There is also a theatre and conventoin center nearby.  The best part of the area is the Wisconsin Sports Walk of Fame, which sits tucked into the sidewalk outside the U.S. Cellular Arena only steps away from the Bradley Center.  The monument is nicely done and has bronze plaques of such area sports greats as Bart Starr, Eric Heiden, Vince Lombardi, and even the late NASCAR champion Alan Kulwicki.  Oddly there aren't too many hockey figures memorialized, but coach "Badger" Bob Johnson is there.  The Bradley Center opened in 1988, and thankfully is not named for a corporate sponsor, but rather after Harry Lynde Bradley, whose family donated the land the arena sits on. The exterior is concrete with a large glass facade where the main entryway and box office are.  It looks like a major league sports venue from the outside, and takes up most of a city block between the arena and its parking garage which sits adjacent.  A lighted electronic marquee sign sits on a street corner outside the lobby announcing upcoming events.  A ticket for tonights game cost $18, which although comprable to other AHL prices, seemed a little high considering it is such a large arena and the Admirals don't draw anywhere near capacity.  I would think a lower price range and a "more butts in the seats" approach might be better, but who am I to comment.

Once inside the entrance you go up an escalator to the wide main concourse.  There are a couple nice team stores, although they sell both Milwaukee Bucks and Admirals gear.  The entryway to the seating bowl is at the top of the lower bowl, and once inside you realize you are  a big time arena as the place holds just shy of 18,000 fans for hockey.  The Admirals have a long history, and although Bucks are the building's primary tenant the Admirals banners are diplayed prominently atop one corner of the arena.  The sight lines are good, although the bottom 8 rows are not as steep as the rest.  Only the lower bowl seats are sold for hockey, and there is no curtain system used like in many large arenas in the AHL, making the place feel cavernous.  There are luxury suites atop the lower bowl as well.  The amenities are state of the art however as the center ice video board is very good.  There are 2 additional video screens, one above each end at the very top of the seating.  The PA system is good, and the appearance of the building, although over 20 years old, is that of a well maintained arena.  The seats are the old style padded seats colored an off blue shade.  The seating in the first 8 rows, as well as the seats on one end of the lower bowl are metal folding chairs  as those sections are on temporary risers.  Enough about the particulars of the building.  Let's get to the fun stuff.

Despite the building being way too big for the AHL, and the fact that the Admirals play second fiddle to the NBA the management at this place does a ton of things right.  They use the video board for replays and entertaining video clips which are actually fn to watch and not just a bunch of ads.  The atmosphere is as close to that of a 3500 seat barn as you can get in such a big arena.  Although the attendance for this game against first year AHL team the Abbotsford Heat was only about 2800 people, the fans that did show up were there to show their support for the team and have a good time.  Cowbells were commonplace, and there is a rowdy section of fans in one corner which do a great job with goalie heckling and organized chants.  It is also apparent that the management of the Admirals has spent some money to  etertain its fans as the common practice of having the mascot shoot t-shirts into the crowd happens at the Bradley Center too, although here the mascot gets to ride on a moving pirate ship. The ship comes out before the game and between periods, and gets high marks from me for its originality.

I think most viewers of ESPN are familiar with the Sausage Races which are held between innings of the Milwaukee Brewers games.  You know, the guys dressed up in the sausage suits that run around the bases.  Brilliantly the Admirals are able to tie in with that and have Cheese Races during the first intermission.  Yes that's right,  4 guys (I think they were guys) dressed up as spreadable cheese products race 2 laps around the rink.  The result was the favorite quote I have heard at an arena this year :  "portwine with the win".   I usually could care less about intermission contests, but the cheese races appealed to me because they played upon Milwaukee sports tradition but were done in a different way, a cheesy way I guess you could say.  It looks like Milwaukee will be known as the processed food racing capitol of the sports world for some time to come.  The game and the presentation were both entertaining, with the Admirals taking a 4-1 win, in a game which includes 4 fights and some vocal fans.  I am extremely glad I went to Milwaukee to catch a game here.  From the respect shown for local sports heroes outside on the walk of fame, to the clever between period contests, to the rowdy fans this place ranked very high on the fun meter, and was in fact my favorite arena on my 4 city midwestern trip. 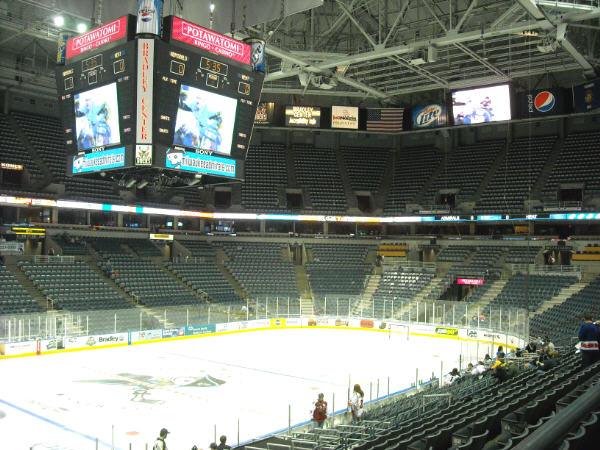 Other information about the Milwaukee Admirals is available at: Admirals Home

Other information about the Bradley Center is available at:  Arena Home

More photo of the Bradlley Center are available Here