Airmen Pond at Bowman Field - Home of the Williamsport Outlaws 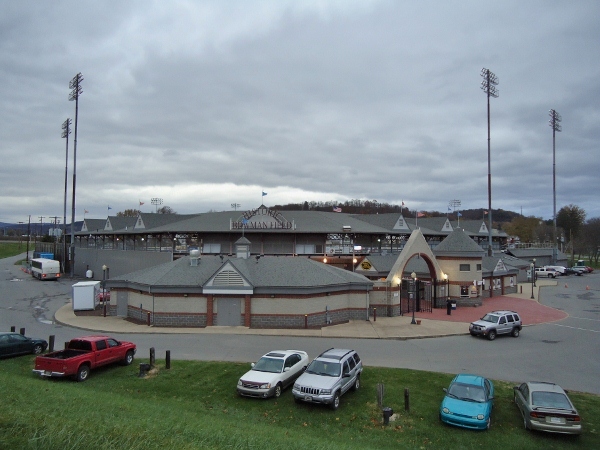 In the world of minor league hockey most teams play in an arena, or a building called a coliseum or auditorium, or a modern building called a center (or centre if you are in Canada).  This year a new experiment was started with the Williamsport Outlaws playing not in an arena as mentioned above, but rather on a pond, in a field.  The idea of Airmen Pond at Bowman Field was born last Summer as the Outlaws wanted to move to Williamsport, but there was no suitable ice arena in town, or even a sheet of ice within 45 minutes.  Despite the unlikely scenario of having outdoor hockey played on a regular basis in the 21st century things have moved forward and we were able to catch the fourth ever home game in team history.  Unlike annual one-off outdoor games the Outlaws are playing here all year, every home game.  Bowman Field is billed as the second oldest minor league ballpark still in operation, having been active since 1926.  One would think that the proposition of outdoor hockey would have made more sense back in the early days of the stadium, but in fact by the mid 1920's professional hockey was already an indoor sport, making the undertaking by city and team officials seem even more far-fetched.  Williamsport is a baseball town as in addition to the Crosscutters, who call Bowman Field home, Little League Baseball is one of the main attractions, with the annual Little League World Series taking place a few miles down the road in South Williamsport.  The first ever Little League game was played on a field which is currently used as the grassy parking lot past the right field wall of Bowman Field and a historic plaque and statue commemorate that event.  Needless to say the experience of attending a hockey game at Bowman Field is unlike any other in minor league hockey.  The stadium, despite its age, looks modern and underwent renovations in 1999, giving the place a sharp brick exterior and aluminum bleacher seating inside.  The stadium is flanked by a flood levy, and there is parking lots on site, which are both paved and grassy depending on the area.  About the only way to know that inside the walls you can hear the clang of a slapshot off the post instead of the crack of a bat when looking at the stadium  from the outside, is the presence of 2 very large generators along the left field wall, used to power the ice plant, as well as signage along the entrance to the parking lot announcing that this is indeed the home of the Outlaws now.

Tickets can be purchased at the box office window right next to the entrance to the stadium.  Seating is general admission, as it is for the Crosscutters baseball games, as the bleacher seats are not numbered.  A ticket for the Federal League game against the Dayton Demonz cost $14.  Thankfully the staff was letting fans in a hour and a half before the game, giving plenty of time to check out the setup of the stadium for hockey.  Once inside the main gates there is a nice open air concourse, with food concession stands, a team merchandise table, and  the restrooms.  To access the seating area you go through one of 2 tunnel-like hallways and come out to the seating area.  Seats run down both baselines, with additional bleacher seating in right field.  The ice surface is set up along the first base line, and runs in front of the right field bleachers.  The grandstand is mostly covered and there are blue plastic box seats closer to the field, but they are essentially unusable for hockey as the ice pad is raised up off of the field by approximately 3 feet, thus hindering view from the front few rows.  The rest of the seats in the main grandstand are aluminum bleachers with backs.  The right field stands are backless aluminum benches, and the roof only covers the main grandstand.  With temperatures in the mid 30s and a stiff breeze blowing the crowd mainly filled the covered grandstand bleachers.  The seating behind home plate and along the third base line is at least 50 feet from the ice surface, but you can still see the action from high up in those areas.  The wood plank style ceiling over the grandstand, and wooden outfield walls harken back to baseball played long ago.  The netting behind home plate is still in place for hockey as well.  Although the sight lines are not the greatest, and the pitch of the seating is not steep enough the layout of the rink still enables most of the fans to be relatively close to the action.

The fan experience for an Outlaws game is pretty good, especially when one considers the confines of the facility, as well as the fact that the city has never had hockey before.  There are a surprisingly large number of ads on the ice and along the boards.  The PA system and announcer can be clearly heard, and if you ignore the fact that the game is happening under the night sky instead of the roof of an arena this could be any other minor league hockey town in America.  There are give-aways and intermission contests, and the crowd seems to be there for a good time.  The Outlaws fans were vocal at times, although fans are faced with the odd reality of hearing traffic noise from nearby Route 15 over the sound of the game on occasion.  Although there are a fair number of actual "hockey fans" in the area there were quite a few folks who seemed content to simply check out the action, enjoy some time with friends and be entertained by the mascot and intermission activities.  The scoreboard currently being used is a very small free-standing unit set up in the corner near second base.  It is functional but sometimes hard to read if you are seated far away.  It will have to do for now as unless the Federal League decides to measure the lengths of its games in innings instead of 20 minute periods the baseball scoreboard in the outfield is useless.  There are a few other things they need to work on, such as charging $3 for a program which does not even have the visiting team roster, but all-in-all for such a new franchise, in such an unlikely location, they are doing a good job.  The ice conditions were also better than expected as there were not even any delays for ice maintenance, aside from the usual zamboni flood at intermission.  The Outlaws actually walk right in front of the fans in the open bleachers to access the ice, providing the fans with ample opportunity to cheer for their players and give them an "attaboy" after a good effort.   A visit to Bowman Field should be experienced by hockey fans as you are met with so many surreal situations while taking in a game here.  Where else can you see a zamboni parked on some plywood atop a still finely manicured outfield?  It was also cool to see players doing  pregame wind sprints in the outfield to loosen up for the game, instead of the usual ritual of kicking the soccer ball around on a quiet place on the concourse of most arenas.  There are obviously many reasons that hockey has been an indoor sport (except for the novelty of once a year outdoor games) for almost a century, and it still remains to be seen how this experiment will work as the weather gets colder, but the 1000 or so fans in attendance seemed to enjoy themselves, and seemed excited to see the Outlaws' first ever win on this evening.  They did it in comeback fashion, winning 3-2 after trailing 2-0.   I'd suggest  you grab the long johns and the winter coat and take in a game here.  There are lots of "arenas" and "coliseum" and "centers" to see hockey at, but only one single pond, on a historic field, where you can experience old fashioned minor league hockey. 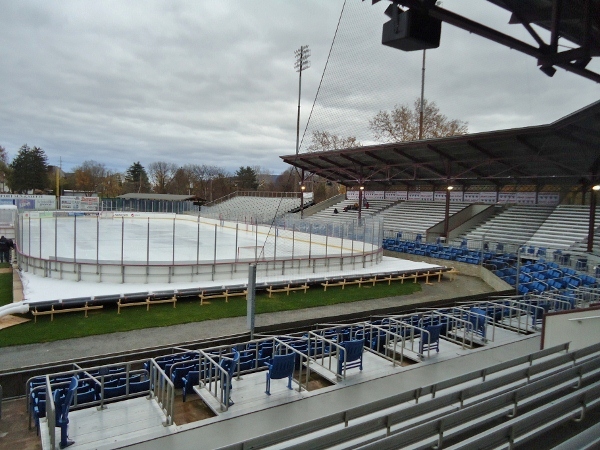 Other information about the Williamsport Outlaws can be found at:  Outlaws Home