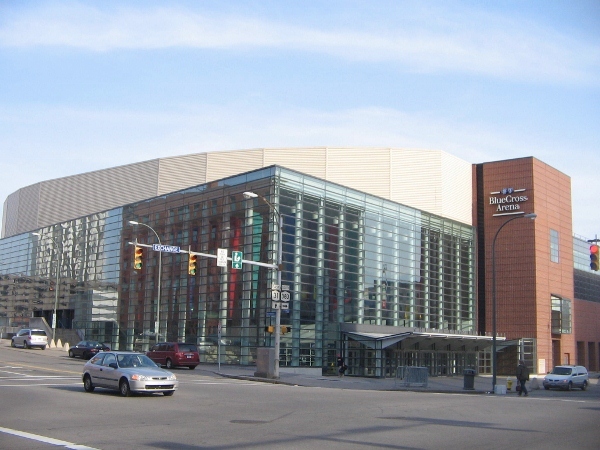 I decided to skip a late season Elmira Jackals game as they had a playoff spot wrapped up and take a roadtrip to Rochester for some AHL action.  Recent rumors of the team being in trouble made getting here a priority, so I did not want to miss out on seeing a game at this old arena.  (Since attending the game it as been announced that the Amerks have been sold, and it appears they will return again next year.  Good news.)   I am certainly familiar with the history of the Amerks as they are among the most recognizable and long standing franchises in minor league hockey.  Having never been to Rochester I was pleasantly suprised how well kept the part of town where the arena sits is.  The building also sits adjacent to the Genesee River, which was very high on this date from recent rains.  From the outside this arena looks quite modern.  This is the result of renovations which took place in the mid 90s as the facility itself actually dates all the way back to 1955.  It is best know as the War Memorial, and a plaque outside recognizes it as such, but it now goes by the corporate name of the nearby health insurance giant Blue Cross.  Parking is apparently plentiful in nearby lots and a garage across the steet, and if in the area with time to spare you need to check out the Dinosaur Barbecue restaurant which is only a block away- Good stuff!

A ticket for tonight's late season game vs Grand Rapids set me back $13 as I chose the second cheapest level of ticket available.  Next to the box office is a nice team souvenir store which seemed rather sparsely stocked however.  In order to access the arena you need to go up a set of escalators or stairs to get onto the main concourse.  Once you get to the concourse you can see clear indications of the age of this building, as the concourse runs underneath the seating area.  The halls are narrow on all but the newly renovated end where the new entrance is.  You could also tell this place is old by looking at the cracks in the concrete throughout the concourse.  There are the usual food selections, along with a stand selling taco salads and the like on the far end.  Entering the seating bowl from the main concourse you immediately notice the large seating capacity.  This place is big for minor league hockey!  It has even hosted regular season Buffalo Sabres games as recently as 2005.  The seating capacity is listed at over 11000 for hockey.  Prior to the renovations the place apparently only held about 6000.  With the Amerks near the bottom of the league in both wins and fighting majors the fan support was limited for this late season game, with the place more than half empty.  This allowed me to watch the game from a few different vantage points. There is a narrow concourse within the seating bowl itself which separates the upper level seats from the lower ones, so moving from seat to seat was not a big deal.  The seating bowl extends quite high, and the seats wrap around the rink in a horseshoe shape on 3 sides and are squared off on the end furthest from the main entrance.  The main thing I noticed is how far from the ice all the seats feel.  The lower 8-10 rows also have a very mild pitch to them, so by the time you get back about 10 rows you are much further from the ice than most arenas.  The seats do get steeper once you get further back, but you still feel really far from the action.  Most of the seats are padded, and are comfortable enough, the sight lines just do not seem that great.  That is until I decided to sit in the small upper balcony section on the far end for the third period.  This section of a few hundred seats is separated from the rest of the seats, and you feel somewhat closed off from the action.  The amazing view from these seats more than makes up for that though as the rake of the seats is amazingly steep,  and you are almost suspended over the ice.  I actually had to duck my head down a little to see behind the net closest to that end.  The arena has an older video scoreboard over center ice, but you cant see it from some of the balcony seats.   Thats OK though as that section has its own scoreboard facing the fans mounted to the rafters which the rest of the arena would never know was there.  Note-  if going to a game in Rochester dont even think about wasting your money on expensive seats.  Get the balcony seats, which also happen to be the cheapest seats in the house.  Underneath the balcony seats there are some luxury suites which can be accessed from the main concourse.  The rest of the luxury are on the sides at the top of the seating area.

Overall taking in a game in Rochester is fun.  The game presentation is rather traditional, and nothing too exciting.  This place is definitely big enough with high enough ceilings to make the remote control blimp get a workout during intermission.  The video scoreboard is functional, although outdated compared to many newer arenas.  The penalty and shot clocks are actually not on the center ice scoreboard, but rather on smaller boards on the end of the arena.  There are some neat architectural effects in the building as the wall which marks the corners of the arena on the end where the balcony is has a brick facade, which gives an old time effect to the building.  The restrooms are definitely a leftover from the pre-renovation era as they are small, cramped, and set up oddly in that you need to step down about 3 steps from the main concourse hallway to access them.  On this warm spring evening the inside of the arena was very warm, and it did not feel like I was at a hockey arena at all. The fans, although hardly very raucous, did seem like good folks.  It has clearly been a frustrating year as you could tell from the amount of fans heckling the efforts of their own players.  Everyone seemed ready for the season to be over.  The game itself was decent, with Grand Rapids scoring a late goal to take a 3-2 win.  This was clearly a Bettman style NHL type game as there was nary a hit or any sign of any physical play at all throughout the game.   Overall I enjoyed my time at the game in Rochester.  I am sure this place would be rockin' with a full crowd.  The goal horn is probably the loudest I have ever heard as well.  On my visit here I did not come across the actual "War Memorial" part of the building as I did not see any memorabilia or tributes to fallen soldiers which are so prevalent in other War Memorial arenas of the same era, such as in Syracuse and at the Kingston Memorial Centre.   I found out after attending the game here that the War Memorial Museum part of the building is actually on the first level beyond the escalators, a part of the building which I did not check out.  I guess I was in such a rush to see the main arena part that I skipped this area.  What you have in Rochester is an impressive building  which is almost NHL size, and is a neat combination of an old building and a modern style arena with enough renovations to make it fit in with today's AHL.  I just wish the sight lines were a little better.  This is definitely a place worth checking out for the history of the franchise alone. Other information about the Rochester Americans is available at:  Amerks home

Other information about Blue Cross Arena is available at:  Venue home